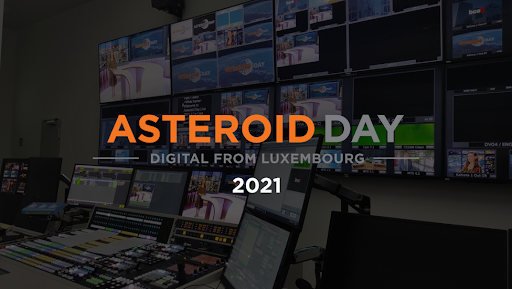 Hundreds of events around the world, more than 40 experts recorded over just one month, five hours of content, and one sensational topic: asteroids! This is how we think of Asteroid Day 2021.

By the autumn of 2020, the world was adjusting to the long-term realities of living with the pandemic, and so we opted for another digital Asteroid Day LIVE, fully produced from Luxembourg.

What is the best part of producing an entirely digital event? The ability to invite specialists from around the globe! This seemed only fitting since Asteroid Day is the UN-designated international day of awareness and education. It also meant that we could hear from people new to Asteroid Day LIVE and renew past partnerships around the globe.

As a result, Asteroid Day LIVE featured a broad range of asteroid researchers: from citizen scientists to top-tier managers at NASA, ESA, LSA and JAXA. Invaluable original content was provided by our partners at the Association of Space Explorers, The Planetary Society, University of Luxembourg SnT, JAXA and ESA. 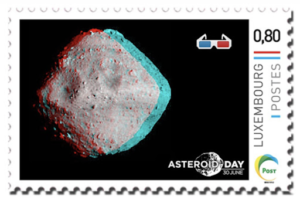 In addition to broadcast, POST Luxembourg Philately commemorated the event with a special postage and stamp that features a image of asteroid Ryugu that was captured by the JAXA Hayabusa2 mission, and rendered into a 3D stereoscopic image by Dr Brian May, astrophysicist, co-founder of Asteroid Day and the lead guitarist of the British rock band, Queen and colleague Claudia Manzoni.

Building on the experience of last year, and utilizing the skills of new in-house staff members, we transformed Zoom calls into panel discussions, one-on-one interviews, and individual presentations. The format of our content this year leant itself towards shorter segments answering the fundamental questions the public asks about asteroids.

Our thanks as always go to our sponsors who make Asteroid Day possible: the Luxembourg Space Agency, BCE, SES, B612 Foundation, the Luxembourg Chamber of Commerce, OHB and the Interdisciplinary Centre for Security, Reliability and Trust (SnT).

Like last year, our event organizers took to hosting online, with virtual events being the majority around the world. In this way, organizers from different countries were able to participate in the same event through webinars, sharing knowledge and attracting a very diverse audience. Alternative social networks like Instagram and TikTok were explored by some organizers with short videocasts and webinars about Asteroid Day.

In countries where pandemic restrictions were more relaxed, face-to-face events were hosted in countries such as Brazil, Mozambique and Lithuania through lectures, meteorite exhibitions and observations of lunar craters.

In this edition we had the honor of having countries that had their first ever participation in Asteroid Day and returning countries from years ago including events in Benin, China and France. All continents were represented on this year’s Asteroid Day. Here are a few events from this year: 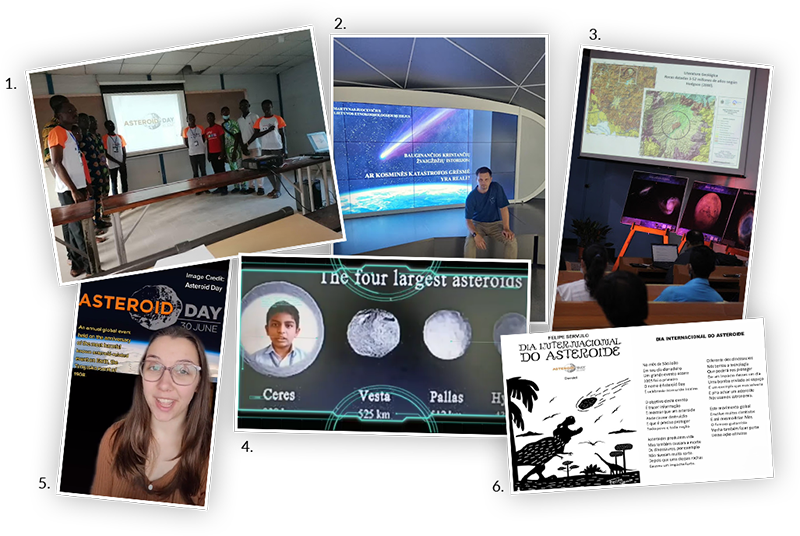 1. Club Astronomique Orion and Sirius Astro-Club | Porto Novo, Benin
Asteroid Day was celebrated in the sectors of the University of Abomey-Calavi with lectures, documentaries projection and sky watching. The last day was dedicated to delivering certificates to professors who participated in basic classes on Astronomy.

2. Lithuanian Museum of Ethnocosmology | Kulionys, Lithuania
This museum’s participation in Asteroid Day is already constant and in this edition, participants were able to attend a lecture by Martynas Juocevičius on the reality of the threat of space catastrophes.

3. Consejo Nicaragüense de Ciencia y Tecnología | Managua, Nicaragua
Astronomy students and fans attended the presentation of 4 conferences on asteroids at the celebration of Asteroid Day in the CONICYT auditorium.

5. SpaceAustralia.com | Sydney, Australia Science Communicator Kirsten Banks came up with the idea of using video-sharing social network TikTok for a short video about the origin and goals of Asteroid Day. Check out her presentation here.

6. Clube de Astronomia Mistérios do Universo | Taperoá, Brazil
Felipe Sérvulo took advantage of Asteroid Day to create a cordel, a traditional Brazilian colonial literary style that tells a story through verse. The illustration of the work, made by the same author of the cordel, was made using the woodcut technique (xilogravura) reproduced on paper.

Asteroid Day LIVE aired on Wednesday 30 June 2021 at 18:00 CET. With the help of leading experts, Asteroid Day Co-founder Brian May and the most engaging voices in science communications from around the world, the five hour programme brought the solar system’s smallest worlds to vivid life for audiences of all ages and backgrounds.

There are more than a million known asteroids circling the Sun – and millions more that have yet to be discovered. Find out how astronomers and planetary scientists go about the Herculean task of finding the asteroids, and then keeping track of them.

Getting to Know Asteroids

Asteroids come in an amazing variety of sizes, shapes, compositions and internal structure. The more we find out then, the more extraordinary they become. Find out how astronomers and planetary scientists get to know the asteroids.

Defending the Earth from Asteroids

There are more than a million known asteroids circling the Sun – and millions more that have yet to be discovered. Find out how astronomers and planetary scientists go about the Herculean task of finding the asteroids, and then keeping track of them.

Asteroids and the exploration of the Solar System

Our interest in asteroids is only growing with time. They hold scientific clues to the origin of the solar system and resources that could help power the wider exploration of space. Find out how the asteroids may be the keys to our future exploration.

Asteroid Days global press reach was over 4.3 billion as measured by Meltwater.  For a small sampling we had articles by India Today (English), Aljazeera (Arabic),  CNN (English),  Agenzia Spaziale Italiana (Italian), Newsweek (English), Der Standard (German) and Futura (French) which represent just a few of the global articles in dozens of languages from around the world leading up to and just after Asteroid Day 2021.

Over the past six years Asteroid Day LIVE has been watched by millions of people all over the world streamed via Twitch and viewers connected to SES satellites. Today, Asteroid Day LIVE broadcasts can be watched again and again via Asteroid Day’s YouTube channel.

Special thanks to our sponsors and partners who made this year possible:

Hear from our sponsors from this year’s broadcast:

A word from CEO of the Luxembourg Space Agency Marc Serres
Interview with Head of Production & Digital Media Operations at BCE Xavier Thillen
Hear Chief Technology Officer of the SES Ruy Pinto on the Asteroids and the Exploration of the Solar System Panel Discussion
A word from Astronaut and Executive Director Ed Lu  of  B612  Foundation’s Asteroid Institute
A word from Chief Executive Officer of the Luxembourg Chamber of Commerce Carlo Thelen
A word from Chief Executive Officer and owner of OHB Marco Fuchs
A spotlight of the Interdisciplinary Centre for Security, Reliability and Trust (SnT) LunaLab from Professor Miguel Olivares-Mendez in Luxembourg