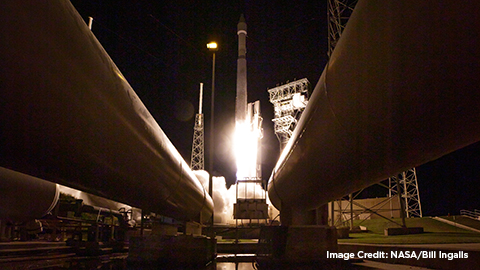 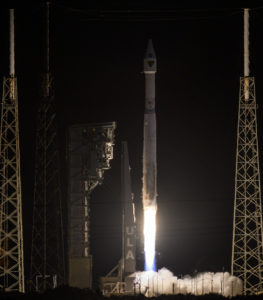 NASA’s Lucy mission took off in a flawless launch on Saturday 16 October, blasting off at 05:34 EDT from Space Launch Complex 41 at Cape Canaveral Space Force Station in Florida. Carried into space by a United Launch Alliance (ULA) Atlas V rocket, Lucy unfurled its solar panels about an hour and a half after launch.

With an area of 51 square metres, these circular panels are among the largest ever flown on a space probe. Although the panels deployed and are now producing electrical energy to power the spacecraft, one panel may not have latched securely into place. NASA are currently investigating the problem but there is no danger to the spacecraft or its mission at the current time. And so begins a twelve year mission to investigate one main belt asteroid and seven Trojan asteroids.

The Trojan asteroids are a special collection of ancient space rocks that have been trapped in the orbit of Jupiter for billions of years. Around 10,000 Trojan asteroids are known. They are split between two swarms; one preceding Jupiter in its orbit and the other following along behind.

It is thought that the Trojan asteroids were captured by Jupiter’s gravity early in the history of the Solar System. As such they should hold vital clues to the formation of the planets – clues that have proven extremely difficult to uncover from Earth because of the distance to the Trojans. 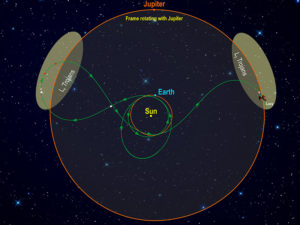 Even travelling at 108,000 kilometres per hour, Lucy cannot directly reach these special asteroids. Instead, it will follow an elliptical orbit around the Sun, which will then bring it back to Earth for two gravity assist manoeuvres – one in 2022 and the other in 2024. This final flyby catapults the spacecraft out through the main asteroid belt, where Lucy will encounter the asteroid Donaldjohanson on 20 April 2025, and into the Trojans beyond.

Lucy’s ingenious orbit will carry it past five Trojans in the preceding swarm during 2027-28. The first will be Eurybates and its tiny moon Queta on 12 August 2027. These asteroids are both fragments of a once larger body that must have been broken apart in a collision. On 15 September 2027, Lucy visits Polymele. This Trojan has a red surface that suggests it may be covered in carbon molecules that some researchers think were steps towards the origin of life in our Solar System.

Staying in this particular swarm for another year, Lucy’s next targets are Leucus on 18 April 2028 and Orus on 11 November 2028. Then, the spacecraft returns to Earth for a flyby on 26 December 2030 that will catapult the spacecraft back out to Jupiter’s orbit, this time into the Trojan swarm following the planet.

On 2 March 2033, Lucy flies by the final targets of its scheduled mission. Patroclus and Menoetius form a binary pair of asteroids. They are both large, with diameters of 113km and 104km respectively, and so orbit each other at a distance of 680km.

A great puzzle to be understood is why there are such different types of asteroids in the Trojan swarms. While most are classified as D-type asteroids, which are the predominant type found in the outer reaches of the main belt, some are C-type, which are the most common type of asteroid overall. But the most intriguing are the P-type Trojan asteroids, these include the Lucy targets Polymele, Patroclus and Menoetius. These could be ice-rich asteroids and are usually found in the farther reaches of the outer solar system.

One possible explanation for how they got into the Trojan swarms relates to a hypothesis for how the outer planets, Uranus and Neptune, achieved their current orbits. Computer simulations find it almost impossible to form Uranus and Neptune in the orbits we see today, 20 and 30 times further from the Sun than the Earth. A hypothesis called the Nice model suggests that they formed closer to the Earth, and then migrated outwards thanks to gravitational interactions with the other giant planets, Jupiter and Saturn. As they drifted outwards they would have dislodged some of the further asteroids, which fell in towards the Sun, some of which were captured by Jupiter and form the Trojan asteroids of today.

Lucy’s mission is to investigate this idea by characterising the Trojan asteroids. It is an ambitious mission that is sure to return many surprises, and prove once again the immense value of investigating asteroids. Watch the Lucy spacecraft live here.

Learn more about the Lucy Mission in this interview with Deputy Principal Investigator Cathy Olkin on Asteroid Day LIVE 2021.