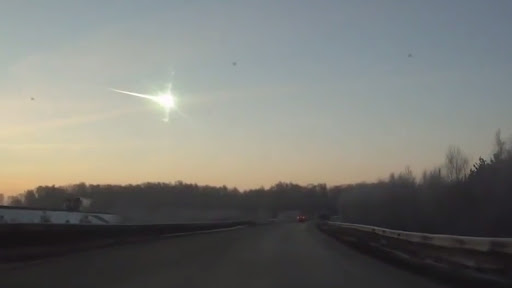 This February marks the 10th anniversary of Chelyabinsk Meteor. On February 15th 2013, the residents of the Russian city of Chelyabinsk were surprised by an intense flash of light and huge trail in the sky, followed by a loud bang. It was short-lived but enough to cause some destruction.

The shock wave caused by the explosion damaged about 3,000 buildings in that city and left about 1,500 people injured, most hit by shards of glass coming from blown-out windows. People had noticed the brilliant flash outside and had rushed toward windows to look at it… And then the delayed shock wave arrived. Thanks to social media, the images of the meteor quickly spread around the world. Early reports called it a UFO.

The original asteroid may be the second largest celestial body to enter our planet’s atmosphere since the Tunguska event in 1908. The Chelyabinsk meteor alerted scientists and authorities about the need to identify and monitor such celestial bodies before they reach our planet. This event changed people’s mindsets, and we have seen significant efforts made to prevent catastrophic episodes in the future.

Raising awareness about the Chelyabinsk meteor is a good opportunity to reflect and discuss what still needs to be done so that similar events don’t happen again. Here are activity tips that will allow for greater awareness, especially for the younger generation:

Videos
The Chelyabinsk meteor was one of the most filmed and photographed celestial events in history. Security and traffic cameras, people with cell phones and ‘dashcams’ (car security cameras are very popular in Russia) helped record the meteor fall and its aftermath. Many records were posted on the Internet and some compilations like those made by Tuvix72 and Alex Grotesq, are among the most viewed on YouTube. They show the trajectory of the meteor, its brightness, the shock wave, people’s reactions, and the damage done to buildings very well. They are great content to show your audience.

The plume left by the meteor in the atmosphere was observed for months by NASA’s NPP satellite. This video explains in detail some aftermaths of the Chelyabinsk event based on these observations. This immersive 360° scene from the California Academy of Sciences simulates the asteroid’s arrival on Earth and shows the scale of the event seen from space.

Consider talking about some bright meteors (the brighter ones are also called “bolides”) observed in your area and whether any meteorites have been found, although meteorites often reach the ground much farther away than observers expect. Enrich your presentation with a collection of videos of the meteors that had major repercussions.

The Chelyabinsk meteor is constantly mentioned in Asteroid Day events, such as this in-person one organized by the Egyptian Society for Astronomy (left) and one virtually presented by Claudio Martinez for the Instituto Latinoamericano de Astroturismo, Argentina (right).

Numbers and comparisons
To make what happened ten years ago more understandable, explain parts of the Chelyabinsk event by making comparisons with other historical events or things from our daily lives. Here are some examples:

Asteroid of origin
Scientists were looking for clues about the asteroid that caused the Chelyabinsk meteor by analysing the scattered fragments and examining the orbit of some asteroids that passed close to Earth in that period. 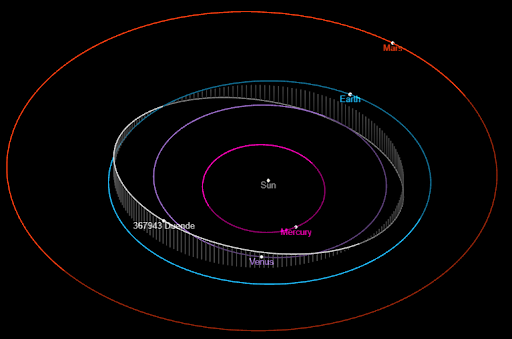 On that day, the asteroid 2012 DA14 (later named 367943 Duende) passed just 27,000 km from our planet and had been considered the first suspect, but it was coming from a different direction. Asteroids 1998 OR2, 1999 NC43, and 2011 EO40 were also mentioned in studies that tried to identify the original celestial body. The Eyes on Asteroids simulator has all these asteroids in its database and improves interaction with its audience by showing them in space in a virtual way.

In JPL’s Small-Body Database Lookup you will access the orbital parameters of these asteroids and use the orbital diagrams, going back in time to know their position in February 2013. Consider organising an investigative activity, presenting the characteristics of these asteroids to your audience and asking them to identify the main suspect for the Chelyabinsk event. But you should explain that only a tiny fraction of asteroids as small as the Chelyabinsk asteroid have been discovered, so it is most likely that the event was caused by a celestial body that was unknown before it struck.

You might want to use this opportunity to explain Near Earth Asteroids (NEA). This lesson describes these asteroids, their characteristics, how they are divided and in which group the Chelyabinsk event asteroid was classified.

What if …?
The Chelyabinsk event asteroid was predominantly composed of silicate and low in iron and other metals. It entered the atmosphere at an angle of less than 20 degrees, slowing it down and allowing its partial disintegration before it exploded.

Consider showing your audience these different scenarios: If the asteroid had been all metallic, how would it have interacted with Earth’s atmosphere? If its trajectory had been at a greater angle, what would have the consequences been? These lessons explain the main types of asteroids and determining factors when one of them hits Earth, which will be useful for the discussion.

Fragments Scattered
After the meteor exploded, residents found several fragments scattered for kilometres in the snow. A large hole was also discovered on the frozen surface of Lake Chebarkul, situated in the Ural Mountains, with dozens of meteorites collected around it.

An investigation was carried out at the bottom of the lake and led to a discovery of a large fragment of the meteorite. After an operation that lasted several weeks, the meteorite was finally removed. Weighing over 500 kg, it is the largest asteroid fragment found.

Main fragment of the Chelyabinsk meteorites (Voice of Russia/BBC)

It is currently on display at the Museum of Nationalities and Technology of the South Urals. Other fragments were distributed to several museums around the world, such as the Field Museum in the USA and the National Museum Scotland.  Check out if a museum near you has a part of the Chelyabinsk or other meteorite and arrange a tour to see it up close. A meteorite collector in your region can also be a special guest for presentations, displaying this and other meteorites from their collection to your audience. The Meteoritical Bulletin Database contains a vast collection of fragment images that serve as alternative displays. 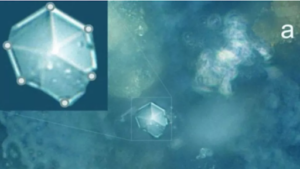 Scientific works: Analysis of the Chelyabinsk meteorite fragments has led to some interesting scientific works that can be quoted to your audience. One of them, published in The European Physical Journal Plus, revealed the presence of new types of crystals after collecting small meteoritic dust particles preserved under the snow.

Another work, led by the University of Cambridge in the United Kingdom and in partnership with the Chinese Academy of Sciences, states that the Chelyabinsk asteroid underwent two impact events before reaching Earth. 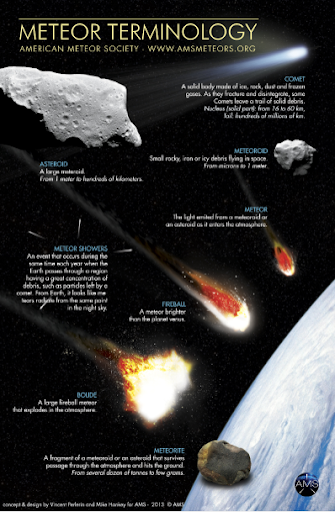 Infographics: Consider enriching your activity by presenting some infographics. This infographic by the American Meteor Society explains the differences between an asteroid, meteoroid, meteor, meteorite, and a comet. It will clarify the terms that often cause confusion to the public due to their misuse by the media.

This ESA infographic shows statistics about the asteroids discovered in the solar system and presents a comparison of the frequency with which they hit Earth according to size, in addition to the energy released in the case of the impact on our planet.

The Asteroid Institute made an interesting infographic that shows the population of Near-Earth Asteroids and presents the percentage of the already tracked ones, which shows that much work still needs to be done.

Voluntary and collaborative science: After the Chelyabinsk event, the interest in meteor research and study has increased. One of the methods that have achieved relative popularity is the use of monitoring stations. With low-cost equipment, these stations are developed, maintained and operated by volunteer collaborators capturing and analysing meteor images. These contributions are important for the scientific community and have produced good results, such as the identification of new meteor shower radiants and the location of meteorites that fall to Earth through the triangulation of recorded bolide images. 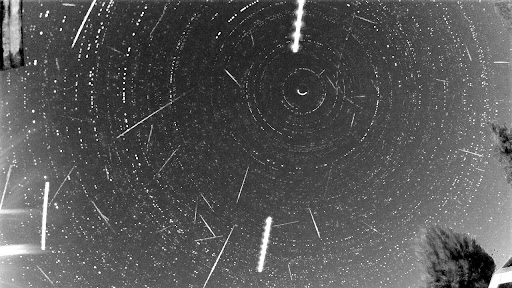 The Red de Detection de Bólidos del Cono Sur, from Uruguay, Red Española de Investigación sobre Bólidos y Meteoritos from Spain, Exoss Citizen Science and Brazilian Meteor Observation Network from Brazil, Fripon/Vigie-Ciel from France, Cameras for Allsky Meteor Surveillance from the USA, the Global Meteor Network and the Italian Prima Rete Italiana per la Sorveglianza sistematica di Meteore e Atmosfera are the examples of how people and organisations around the world are committed to this work.

These ideas will remind your audience about this impact and will help raise awareness about the importance of tracking dangerous asteroids. Don’t forget to register on our page and report it later.