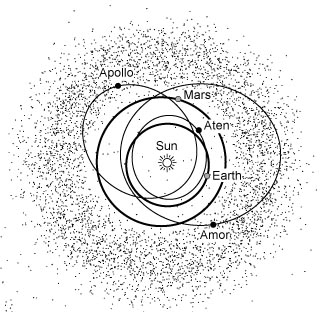 Learning Objective:
Learn what are Near Earth Asteroids (NEA), and how they are divided into groups. 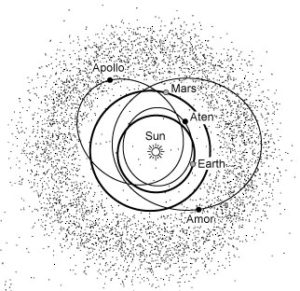 Schematic with the orbits of the three main groups of NEA (Kenneth R. Lang, Tufts University)

Overview:
Thousands of asteroids reach a small distance from our planet and the characteristics of their orbits help scientists classify them.

Specifics:
Any celestial body in the Solar System whose orbit passes close to Earth is considered a Near Earth Object (NEO). Comets and asteroids with perihelion less than 1.3 astronomical units (a scale that corresponds to the Earth-Sun distance) are part of this category.

Based on this convention, while just over a hundred comets are considered Near Earth Objects (NEOs), nearly 30,000 asteroids fall into this classification, being called Near Earth Asteroids (NEAs). 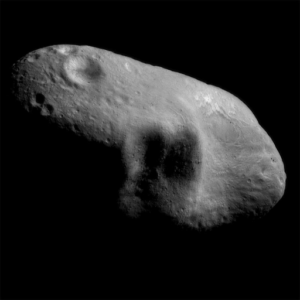 The orbital elements (distance from perihelion, distance from aphelion and semi-major axis) of NEAs allow them to be divided into three main groups: Amor, Apollo and Aten. There is a fourth group, Atira, which corresponds to only 0.1% of the total.

Amor: this group of asteroids is located between the orbits of Earth and Mars. Although they may occasionally cross the orbit of the red planet, they never cross the Earth’s orbit, but can come very close to it. A classic example of an Amor object is 433 Eros, the first asteroid to be orbited and landed by a spacecraft and also the first NEA to be discovered. 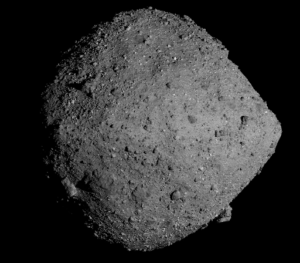 Image of asteroid Bennu taken by the OSIRIS-REx spacecraft (NASA)

Apollo: this group has asteroids with an orbit in which their perihelion (closest point to the Sun) is lower than Earth’s aphelion (farthest point from the Sun). This aspect makes these asteroids occasionally cross our planet’s orbit, making it possible to become potential candidates for a future collision. Asteroids 101955 Bennu (OSIRIS-REx mission’s target), 162173 Ryugu (Hayabusa2 spacecraft target), 2020 GE (target asteroid of the NEA Scout spacecraft) and the object that originated the Chelyabinsk event in 2013 are examples of Apollo group objects.

Aten: these asteroids have an orbit in which their aphelion is greater than the perihelion of the Earth. Like the Apollo group, they also occasionally cross Earth’s orbit. The asteroid 99942 Apophis, which has long made astronomers apprehensive about its possibility of impact (recently ruled out), is an example.

Atira: also called Apohele, this group contains asteroids with an orbit that is entirely confined within Earth’s orbit. They don’t cross the Earth, but some of these objects can come very close to it. With a small amount discovered so far, many astronomers still consider them a subgroup of the Aten asteroids. An example is 163693 Atira, which gave this group of asteroids its name.