Hayabusa2’s sample capsule streaks across the sky on its return to Earth. Credit: JAXA.

The Hayabusa2 sample capsule is safely back on Earth. It parachuted to a soft landing near Woomera in South Australia on 6 December (local time), and has now been transported to Sagamihara Campus Research Laboratory Building, Kanagawa, Japan.

This is a major achievement for the Japan Aerospace Exploration Agency (JAXA) and Japan’s Institute for Space and Astronautical Science (ISAS), who began developing the Hayabusa2 mission in 2011.

This is a particular triumph for Makoto Yoshikawa, the Mission Manager for Hayabusa2 at the Institute of Space and Astronautical Science (ISAS), which is part of the Japan Aerospace Exploration Agency (JAXA).

Makoto, who is also a member of the Asteroid Day Expert Panel and Asteroid Day’s Regional Co-ordinator for Japan, made the first presentation of the proposal for the mission in July 2009 . Just over a year later, the mission was funded by the Japanese government at a cost of around 16.4 billion yen (US$150 million). And now, a decade later, his hard work and that of his team has really paid off. 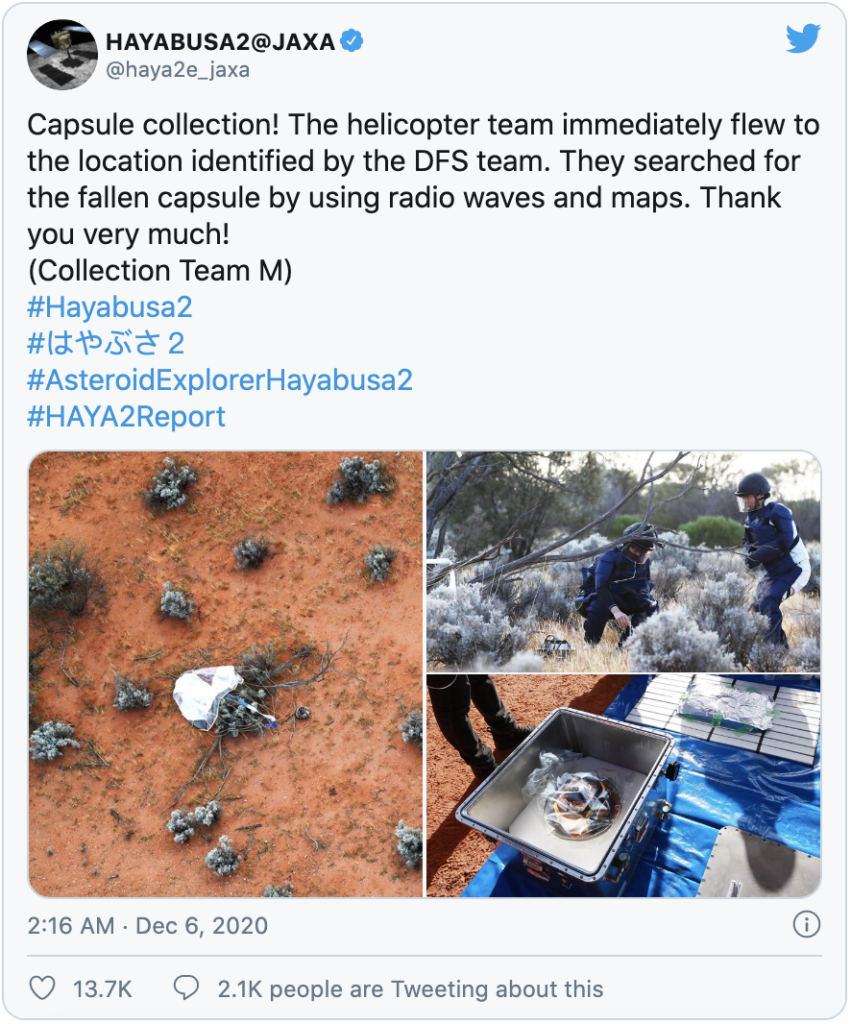 At a press conference in Sagamihara to announce the return, Dr Yuichi Tsuda, project manager for the mission told journalists, “Hayabusa-2 is home. We collected the treasure box. The capsule collection was perfectly done.”

Naomi Murdoch, a planetary scientist from Institut Supérieur de l’Aéronautique et de l’Espace (ISAE-SUPERAO), who contributed to Asteroid Day LIVE 2020 and is a member of the NEO-MAPP consortium, told us, “It’s fantastic what they’ve done. I’m so impressed by JAXA, and by the mission. The mission has just been so exciting from start to end.”

Following the Hayabusa1 mission, which visited asteroid Itokawa in 2005 and returned around 1500 grains of material from its surface in 2010, Hayabusa2 was launched in 2014. On 27 June 2018, it rendezvoused with asteroid Ryugu and began mapping the asteroid and performing other studies.

In 2019, Hayabusa2 descended to the surface of Ryugu and collected a sample. It then released an impactor that made a crater, and collected some of the exposed sub-surface material. In November of that year, Hayabusa2 set off on its journey back to Earth.

The sample capsule was released by Hayabusa2 about 12 hours before its impact with Earth. The main spacecraft then diverted so as not to hit the Earth. Operators in Japan, vectored the spacecraft onto a trajectory that will take it to another asteroid in 2031. Known as 1998 KY26, whereas Ryugu was roughly 85 km across and spins once in 7.6 hours, KY26 is just 30 metres in diameter and spins once every 10 hours or so.

Striking the upper atmosphere at a velocity of around 11 km/s, the sample capsule created a fireball across the Australia sky. Having been slowed down sufficiently by its heat shield, the sample capsule then deployed a parachute and came to rest in the desert. A radio beacon guided the search helicopter to its precise landing point.

Ryugu is a carbonaceous asteroid. These are primitive asteroids and are thought to preserve material from the origin of the solar system including ices and organic compounds that could have been important for the origin of life on Earth.

The samples from Ryugu are expected to weigh about 10 milligrammes and be distributed to laboratories around the world next year. Although the sample size may seem small, it is enough for modern laboratory analysis techniques to deliver a plethora of scientific results.

Speaking to the BBC, frequent Asteroid Day guest speaker Prof Alan Fitzsimmons, from Queen’s University Belfast, said the sample would “reveal a huge amount, not only about the history of the Solar System, but about these particular objects as well”.

All of us here at Asteroid Day also offer our congratulations to all those involved in the mission.