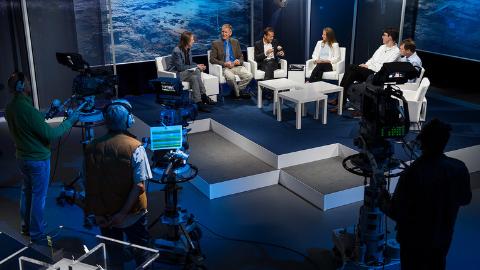 LUXEMBOURG, 21 June 2021 /PRNewswire/ – The Asteroid Foundation’s annual Asteroid Day LIVE programme returns in person Thursday 30 June 2022 at 11:00 CET. After two years as a digital event, astronauts, experts and science communicators from across the world will again converge on Luxembourg to discuss the importance of asteroid research, missions, and advances in space-based technologies. The four-hour-long programme will vividly bring the solar system’s smallest worlds to life for audiences of all ages and backgrounds.

Asteroid Day LIVE 2022 will be built around seven panel discussions that will tell the full story of asteroids; from the formation of the Solar System, 4.6 billion years ago, to the scientific work taking place today, and our future prospects as we begin to imagine ways to utilise the resources asteroids contain.

The panels will explore: the origin of the solar system, how we discover and track Near-Earth asteroids, how we characterise an asteroid according to its composition, orbit and other physical properties, how we will defend Earth if and when we spot a threatening asteroid, what resources we may find on asteroids and elsewhere in the Solar System, how we can utilise space in a sustainable way, and what future missions and technology we have to look forward to.

To tell these remarkable stories, Asteroid Day LIVE will bring together a “Who’s Who?” of people involved in asteroid research. Among those transmitting live from Luxembourg’s Broadcasting Centre Europe will be:

The panels this year will be moderated by Gianluca Masi, Virtual Telescope Project; Phil Plait, Astronomer, blogger, and author, and Stuart Clark, Asteroid Day’s Editorial Director, and Patrick Michel, Director of Research at CNRS, Côte d’Azur Observatory. Special pre-recorded interviews will take us into the heart of missions such as NASA’s OSIRIS-REx and DART.

In addition to the live broadcast, the Foundation will be hosting a number of educational events in Luxembourg throughout the last week of June. Free events open to the public include:

And at the heart of it all is the original purpose of Asteroid Day: to raise awareness that one day we will need to deflect an asteroid away from our planet. Through hard work and dedication, the global asteroid community is working to make this possible – and that puts the asteroid hazard in a class of its own, because uniquely among the natural disasters, asteroid impacts are preventable.

“Asteroid Day reminds the world of just how important these celestial objects are. They hold the keys to understanding the formation of the Solar System, provide stepping stones we will utilise to explore our solar system, and occasionally they hit our planet. We are in an extraordinary time of asteroid research and missions, and every year, our asteroid experts bring new insights and revelations.” says Dr Dorin Prunariu, Vice Chair of the Asteroid Foundation and a former chairman of the United Nations Committee on the Peaceful Uses of Outer Space (UN COPUOS).

Last week Asteroid Foundation highlighted a collection of independently organised Asteroid Day programs which are being hosted around the world in this press release. Additionally, POST Philately Luxembourg issued the first of a series of Asteroid Day Stamps, which are available for purchase here.

About Asteroid Day:
Asteroid Day is held on 30 June each year to mark the date of Earth’s largest asteroid impact in recorded history, the Tunguska, Siberia event. Asteroid Day was co-founded by astrophysicist and famed musician Dr Brian May of the rock group Queen; Apollo 9 Astronaut Rusty Schweickart; Filmmaker Grig Richters; and B612 Foundation President Danica Remy, to educate the public about the importance of asteroids in our history, and the role they play in the solar system. In 2016, prompted by the leadership of the Association of Space Explorers (ASE), the United Nations declared Asteroid Day to be a global day of education to raise awareness and promote knowledge in the general public about asteroids. Thousands of independently organised events have taken place around the globe, encompassing 125 of the world’s 195 countries.

Asteroid Day is been made possible thanks to partnerships with the Association of Space Explorers (ASE), Broadcasting Center Europe (BCE), B612 Foundation, the European Space Agency (ESA), OHB System, Luxembourg Chamber of Commerce, Luxembourg Space Agency (LSA), The Planetary Society, SES, the Interdisciplinary Centre for Security, Reliability and Trust (SnT) at the University of Luxembourg, and Twitch. Asteroid Day, Asteroid Day LIVE, Asteroid Day TV and SpaceConnectsUs are all programmes of Asteroid Foundation, a Luxembourg based non-profit.

A Media Kit including quotes, photos, video and B-Roll video is available in the Asteroid Day Newsroom. Photos from previous Asteroid Day events in Luxembourg are available on Flickr.

About Arendt:
Arendt & Medernach is the leading independent business law firm in Luxembourg and has representative offices in Hong Kong, London, New York and Paris. Its international team of 380 legal professionals represents clients in all areas of Luxembourg business law. Arendt & Medernach is dedicated to providing top-quality legal services, accompanied by a flexible approach and responsiveness in client relationships. The firm acts on behalf of a large number of Luxembourg banks, financial sector institutions and investment funds, and is continuously involved in cross-border transactions.

About Asteroid Foundation:
Asteroid Foundation was formed in 2017 with a mission to promote worldwide awareness of asteroid opportunities and challenges, and the emerging space economy. The Asteroid Foundation undertakes programmes and activities to support scientists, engineers and students around the world providing free educational tools, newsletters, original articles and resources year round. Annually, the Foundation organizes events surrounding International Asteroid Day, a United Nations recognized day of education and awareness observed on 30 June. Visit their Flickr account to see pictures from previous events. https://asteroidfoundation.org/

About Asteroid Institute and B612 Foundation
Asteroid Institute brings together scientists, researchers and engineers to develop tools and technologies to understand, map and navigate our Solar System. A program of B612 Foundation, the Asteroid Institute leverages advances in computer science, instrumentation and astronomy to find and track asteroids. Since 2002, the Foundation has supported research and technologies to enable the economic development of space and enhance our understanding of the evolution of our Solar System in addition to supporting educational programs, including Asteroid Day. Founding Circle and Asteroid Circle members and individual donors from 46 countries provide financial support for the work. For more information, visit B612foundation.org.

About Broadcasting Center Europe (BCE)
Broadcasting Center Europe (BCE) is a European leader in media services, system integration and software development in the areas of television, online video, streaming, radio, production and postproduction, telecommunication and IT. With its extensive experience on the media market, our team provides high-quality services and will always find the solution that matches your project and budget. With more than 200 highly qualified and motivated people, BCE serves about 400 clients in various sectors, such as TV channels, radio stations, film distributors, producers, advertising companies, sports federations, fashion, events, institutions and telecommunications operators.
www.bce.lu

About OHB System
OHB System is a European multinational technology corporation, headquartered in Bremen, Germany. They are and have been one of the leading companies in Europe’s space sector for the past 35 years, particularly in their core business comprising low-orbiting and geostationary satellites. They have been developing and executing some of the key projects of our times such as the Galileo navigation satellites, the SARah reconnaissance system, the MTG meteorological satellites, the EnMAP environment satellite, the TET-1 technology testing vehicle and the Hispasat H36W-1, ELECTRA and EDRS-C telecommunications satellites. https://www.ohb-system.de/

About The Planetary Society
The Planetary Society is the world’s largest independent space-interest organization. Led by CEO Bill Nye and powered by space enthusiasts around the globe, the Society works to advance planetary exploration, the search for life, and planetary defense through education, innovation, advocacy, and global collaboration. Learn more at www.planetary.org.

About SES
Headquartered in Luxembourg, SES is the world’s leading global content connectivity solutions provider via satellite, delivering services to video and data customers worldwide, including broadcasters, content and internet service providers, mobile and fixed network operators, governments and institutions. With around 70 satellites in two different orbits, SES combines a vast, intelligent network of satellites and ground infrastructure with industry-leading expertise to manage and deliver high-performance video and data solutions virtually everywhere on the planet. www.ses.com/

About Sofitel
Opened in 2008, Sofitel Luxembourg Le Grand Ducal is a striking design hotel gazing over the picturesque Alzette and Pétrusse valleys and Luxembourg UNESCO Old Town. Created by the architect Philippe Capron, the hotel is a daring combination between cosy design, modernity and French elegance. Its location in the heart of the city centre is exceptional: within walking distance of the historic centre of Luxembourg, it is the ideal venue for professional or leisure stays. It is also near the main train station and only a few minutes away from Luxembourg international airport. www.sofitel.com