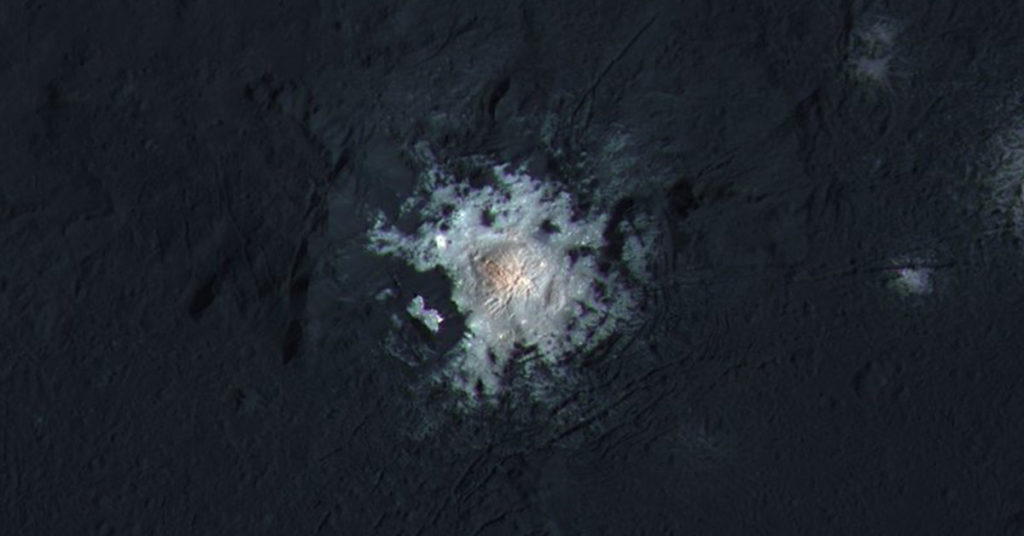 For months, scientists have been puzzled by mysterious bright spots dotting the surface of Ceres, a dwarf planet drifting in the asteroid belt. Now, new images snapped by NASA’s Dawn spacecraft show the most detailed view yet of the largest of these odd features, Occator Crater.

In a presentation at the Lunar and Planetary Science Conference yesterday, NASA scientists showed off the images taken just 240 feet above Ceres surface that highlight several different kinds of landforms that make up the bright spot, including a shiny dome covered by cracks in the center of a smooth pit, Loren Grush reports for The Verge.

“Before Dawn began its intensive observations of Ceres last year, Occator Crater looked to be one large bright area,” planetary scientist Ralf Jaumann, who is a Dawn co-investigator, says in a statement. “Now, with the latest close views, we can see complex features that provide new mysteries to investigate.”

Recent studies have shown that the Occator Crater and the hundreds of other bright spots dotting Ceres’ surface are most likely made of a reflective, salty substance called hexahydrite that is constantly shifting and reforming. The new images of the crater appear to support that theory, Jaumann explains, as the cracks crisscrossing the dome suggests a relatively recent geologic activity, Jamie Condliffe reports for Gizmodo.