Scientists from NASA’s Center for Near-Earth Object Studies at the Jet Propulsion Laboratory in Pasadena CA announced in February that a thirty meter sized near-Earth asteroid, tagged 2013 TX68, would pass safety by the Earth on March 8 of this year at a likely distance of 5 million kilometers, or about thirteen times the distance between the Earth and Moon. Their earlier, initial analysis suggested an Earth close approach on March 5 of this year with a remote (one in 250 million) Earth impact possibility in September of next year. This preliminary analysis was later revised to suggest a not-so- close Earth approach on March 8th. Asteroid 2013 TX68 was not observed during this early March Earth approach, but even so, there is no possibility of an Earth collision either in September of next year or at any time in the next one hundred years.

Why was the Earth close approach date advanced by three days, why wasn’t this asteroid observed during this recent close approach, and how can we be sure that this object poses no threat for more than 100 years?

The NASA-funded Catalina Sky Survey operating near Tucson Arizona discovered near-Earth asteroid 2013 TX68 on October 6, 2013. After only three days of tracking, the asteroid passed into the daylight sky and was then unobservable. By the time it went back into the night sky, it was too faint to be observed. With only three days of positional information, the asteroid’s position in its path around the sun could not be pinned down as precisely as it can with other asteroids. Its path was fairly well determined – but not its position along its path. More observations were needed. Think of a major league baseball outfielder trying to catch a high fly ball. When the baseball is first hit, our intrepid outfielder only knows it’s a high fly ball. He doesn’t know just where to move to get under it for the catch. As he watches the fly ball, he gets more and more information on the ball’s trajectory, he gets a better and better idea as to where the ball is headed, and he adjusts his field position accordingly. 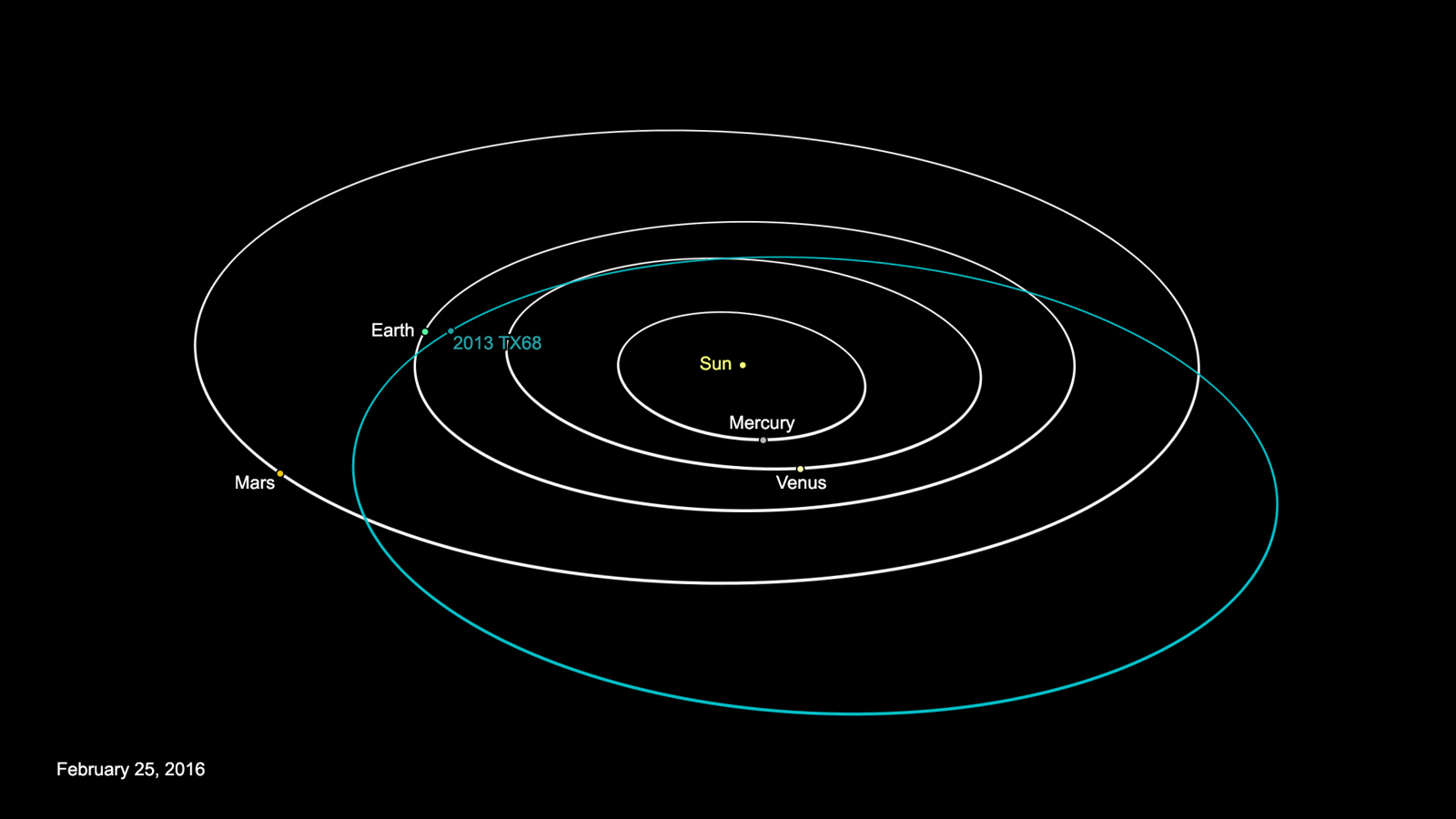 The same is true for our asteroid orbit computers. When a few, pre-discovery positional observations of 2013 TX68 were located in the archives of the NASA-supported Pan-STARRS telescope in Hawaii, this additional information allowed for an improved knowledge of the asteroid’s trajectory – and an improved prediction for when the object would sail safely past the Earth on March 8th.

As noted, the asteroid’s path around the sun is relatively well known but its position on its path is much less well known. Think of a model train running around its oval track about a Christmas tree. If we’re out of the room, we don’t really know where the train is on its track but we do know where the track is so we’re not worried about the train running into the presents under the Christmas tree. The same is true for our asteroid’s orbit about the sun. Without additional positional observations, we may not know exactly where the asteroid is in its orbit, and hence where to look for it in the sky during its Earth approach on March 8, but we do know its orbital position and orbital track around the sun well enough to rule out any Earth impacts for the next 100 years.

Before the March 8th passage by the Earth, a misleading press release issued by the Slooh group of astronomers, announced that the facts for this asteroid’s passage by the Earth kept changing, JPL was unable to pin down its orbit and the Slooh group would use their robotic telescopes in an attempt to rediscover it. These folks need to understand that asteroid locations are always given as a range of possible positions with a most likely case somewhere in the middle. Any asteroid observed for only 3 days will have a wide range of possible positions 3 years later. When more observations became available for this asteroid, JPL scientists improved its orbit and narrowed the range. That’s the way the orbit improvement process works: the facts did not keep changing; as the Slooh astronomers alleged, they only led to more precise predictions. The fact that the nominal close approach distance and time changed is not inconsistent with the earlier report. Moreover, the asteroid’s position uncertainty along its orbital path during the March 8 Earth flyby was tens of degrees in extent making the Slooh astronomers attempt to observe the asteroid all but impossible. This type of information, for any asteroid at any time, is freely available to anyone who choses to become familiar with JPL’s websites, neo.jpl.nasa.gov and ssd.jpl.nasa.gov.

Let’s hope the information on these websites will be utilized before misleading statements are made about the next near-Earth object that flies past the Earth.