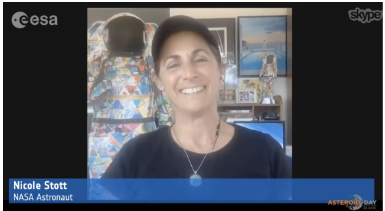 We are excited to announce that last Thursday’s Space Connects Us Live Stream was a massive success! With over a dozen astronauts and a total of 5 segments each in different languages, the audience had a chance to interact with the speakers asking questions via the #spaceconnectsus on social media.  Providing viewers with unique tips on how to best live in isolation, each segment offers a different take on the matter. Read below for a recap of each segment. 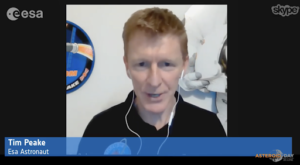 Echoing some of the points from the previous segments, Astronaut Tim Peake explains, “Habits and routines are the key during an isolation situation. Normalise the abnormal!” Anousheh expands on this, “Right now, we’re all facing a new set of environments that we need to adjust to. I’ve learned that as human beings, we’re amazingly adaptable to our environment.” Rusty Schweickart also pointed out that the lessons learned from this experience should be taken into account in the future, “The collective efforts around the world should also be done when it comes to climate change for example, we had maybe not realized until now that we’re all in this together.” Nicole Stott reinforced that thought by concluding that “We need to leave this as crew of spaceship Earth, not as passengers.”

Hosted by Sander Koenen, author of André Kuipers biography and local journalist, the Dutch segment featured ESA astronauts Frank de Winne and Andre Kuipers. Frank de Winne emphasised the importance of all people working from home, while Andre expressed that we all need to look out for one another– especially children. They agreed that keeping a schedule and regular habits was as important for children as it is for everyone else. 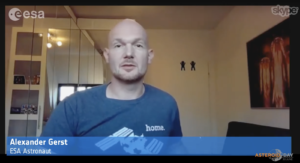 The German segment hosted by Ranga Yogeshwar and joined by the three ESA astronauts Alexander Gerst, Thomas Reiter and Matthias Maurer and Director General of ESA, Jan Wörner. At one point, they discussed the parallels between the isolation in space and here on earth as described by Thomas Reiter: “Three weeks before a launch, each astronaut needs to undergo three weeks of quarantine and isolation. It would have dramatic consequences if any kind of virus would get on board and therefore this procedure is crucial”. Alexander Gerst added to this stating that “I was trying to avoid all contact with other people, kept a safe distance to everyone, and washed my hands regularly. So it was kind of the same procedure that we have to follow now.”

Hosted by Rossella Panarese, of Italian radio station Radio3 Scienza, the Italian segment included Astronaut Samantha Cristoforetti and astrophysicist and astronomer Gianluca Masi. Samantha expressed that everyone must accept that this is the “new normal”. “It is good to think of it as a new reality, a long-lasting mission and let’s organize space and coexistence in the smartest way possible.” 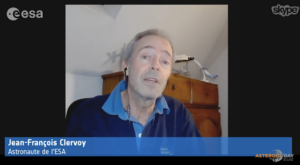 The French segment was hosted by Bruce Benamran, a French youtube personality, with ESA astronauts Jean-François Clervoy, Thomas Pesquet and Samantha Cristoforetti. Thomas Pesquetweighed in on the importance of solidarity, “As a member of the earth crew, it is important to support each other as much and as long as we can.” In order to do this, Jean-François Clervoy has a simple solution: “Our goal at the moment is to stay home and have faith that the experts working on this issue will find a solution”.

Thomas Pesquet weighed in on the importance of solidarity, “As a member of the earth crew, it is important to support each other as much and as long as we can.” In order to do this, Jean-François Clervoy has a simple solution: “Our goal at the moment is to stay home and have faith that the experts working on this issue will find a solution”.

We want to thank everyone who tuned in, asked questions, showed support, and shared this program with your friends and family. We hope that you enjoyed our stream and that you learned a thing or two on how to better cope with this situation.

Did you miss the broadcast? You can rewatch the whole stream on our website, the language time slots are indicated there.