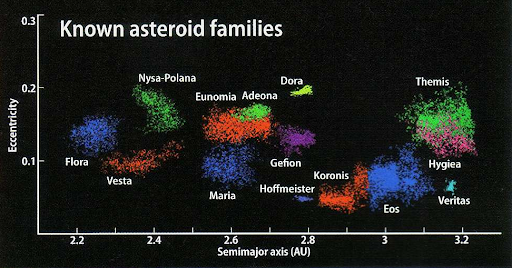 Overview:
The Asteroid Belt is made up of clusters of similar objects that give us clues about asteroid past collisions.

Specifics:
Asteroids are so diverse that many classifications have been created to better understand them. They help to group asteroids based on their composition, ability to reflect sunlight or position in the Solar System, such as those located near Earth or other planets.

Another widely used scientific classification of asteroids is grouping them into families. The similarity of orbital elements is chosen as the main criterion, a family of asteroids may indicate that they have the same origin. Similarities found in mineralogy, spectral analysis, reflective capacity and peaks in the density of objects in a region of space can also be used as criteria tohelp classify asteroid families more accurately. 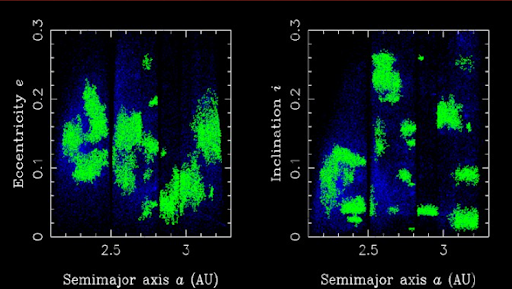 Plotting the orbital elements of Main Belt asteroids on a graph, clusters can be seen (in green). The similarities of these elements may indicate results from big past collisions (David Vokrouhlický & David Nesvorný)

Formation – A family of asteroids is usually formed when a collision breaks a parent body into fragments of different sizes. When we see images of asteroids taken by space probes, we notice craters on their surface resulting from numerous collisions, but some of them are so violent that they break asteroids into pieces.

Not all fragments resulting from a collision are expelled from the gravitational action of the parent body. They can move together in clusters, moving in similar orbits around the Sun and dispersing over time.

History – When the number of asteroids discovered began to rise rapidly, scientists realised that some of them share the same orbital characteristics such as eccentricity and inclination. In 1917, the Japanese astronomer Kiyotsugu Hirayama analysed these orbital elements and in the following year proposed to divide asteroids with these similarities into groups.

Hirayama introduced the term family and named some of these groups after their main asteroids. The first asteroid families were named Coronis, Eos and Themis, and later Flora and Maria..

Distribution – The belt between Mars and Jupiter is where the most asteroid families are located. This belt is not homogeneous because of Jupiter’s gravitational influence. There is an alternation of gaps and accumulations of fragments in certain regions, where some of these families originated and are currently located. It is estimated that one third of the Main Belt objects belong to some family. Currently more than 100 families have been identified with thousands of asteroids classified within them.

Distribution of some of the major families of asteroids located in the belt between Mars and Jupiter according to their orbital elements (Astronomy Magazine – Roen Kelly, After M. Juric, Z Ivezic, R. Lupton Et al.)

Below are the biggest families of asteroids: 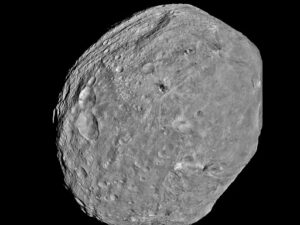 Nysa–Polana complex – This is the largest group of asteroid families, with nearly 20,000 known objects. Located in the inner region of the belt, it is subdivided into smaller families according to the mineralogy and reflection power of its component asteroids. It got its name after one of the most massive asteroids of the two main subgroups.

Vesta family – This family is located near its parent body, one of the largest known asteroids visited by Dawn spacecraft in 2011. About 6% of Main Belt asteroids belong to the Vesta family with more than 15,000 identified members. 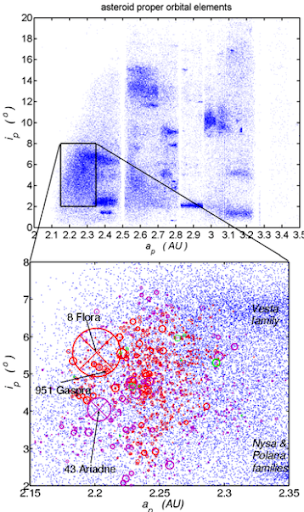 Flora family – With nearly 14,000 objects, this family is located near the inner (closest to the Sun) edge of the Main Belt. Its members have high power of reflection and may have originated from the fragmentation of a single object. Asteroid Flora, which gives its name to the family, may have been the largest one of them. Gaspra, the first asteroid to be visited by a spacecraft, is a member of the Flora family as well.

Eos family – It is located in the outer region of the main belt and has more than 9,000 objects, Its main object is the asteroid Eos, which possibly resulted from a giant ancient collision. Some particularities in the analysis of the components of this family made scientists name a new category of asteroids.

Massalia family – With more than 6,000 members, this family is believed to be the result of an impact on the main body of asteroid Massalia. While Massalia has a diameter of about 150 km, the others do not exceed 7 km in diameter. The mass of all small members is less than about 1% compared to the main object.

Koronis family – This family contains nearly 6,000 objects and is believed to have originated from a collision of two larger bodies billions of years ago. The asteroid Ida, visited by the Galileo spacecraft in 1993, belongs to this family.