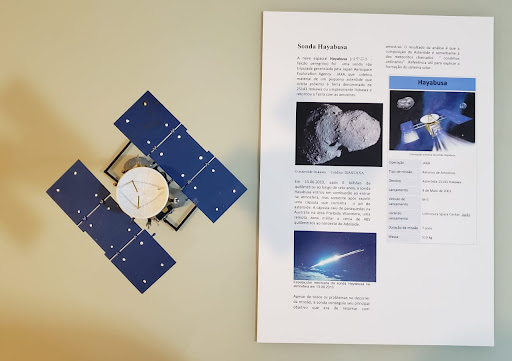 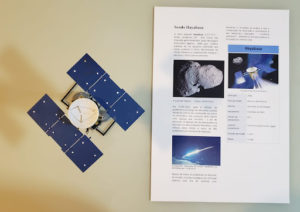 Paper model of the Japanese probe Hayabusa1, assembled for an exhibition. Next to the model is a sheet with information about the probe and mission objectives. (Paulo Regis/Clube de Astronomia de Fortaleza – Brazil)

These activities are amusing. They tap into creativity and keep the audience’s enthusiasm level. Without needing so much space, exhibitions of these models can be organized in highly trafficked places such as museums and shopping malls, or in more intimate spaces such as the hall of a building or a classroom.

Organizations may want to use this as an opportunity to host a contest for the best role model. Winners may receive a certificate or award in person or remotely.

Want to get building? We’ve assembled a collection of missions that are some options available on the internet of scale models of spacecraft that are part of the history of asteroid exploration. The list below is in chronological order to guide a presentation of missions over 5 decades: 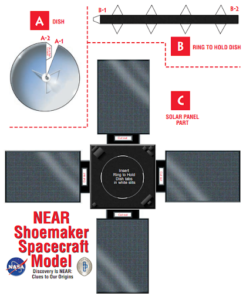 Model parts of the NEAR-Shoemaker spacecraft, launched in 1996 (NASA)

1989 – Galileo (NASA): it explored asteroids 951 Gaspra and 243 Ida before reaching the planet Jupiter, its final destination. See instructions.
1996 – NEAR Shoemaker (NASA): explored the asteroid 433 Eros, was the first spacecraft to orbit and land on an asteroid. See instructions.
1997 – Cassini-Huygens (NASA/ESA/ASI): this spacecraft passed asteroid 2685 Masursky on its way to Saturn.
1999 – Stardust (NASA): its mission was to investigate the asteroid 5535 Annefrank and collect samples from comet Wild 2.
2003 – Hayabusa1 (JAXA): explored the asteroid 25143 Itokawa and was the first Japanese sample collection and return mission.
2004 – Rosetta (ESA): before arriving at comet 67P/Churyumov–Gerasimenko, this spacecraft passed close to asteroids 2867 Šteins and 21 Lutetia. 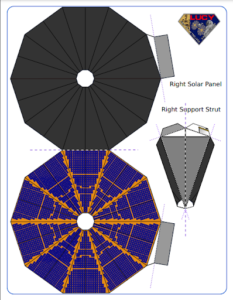 2006 – New Horizons (NASA): its target was Pluto and on its way it passed the asteroid 132524 APL.
2007 – Dawn (NASA): this mission explored 1 Ceres, the first asteroid discovered, and 4 Vesta, the brightest Main Belt asteroid seen from Earth. See instructions.
2014 – Hayabusa2 (JAXA): its objective was to collect samples from the asteroid 162173 Ryugu and bring them to Earth for analysis.
2016 – OSIRIS-REx (NASA): this spacecraft sampled asteroid 101955 Bennu for return to Earth.
2021 – Lucy (NASA): its objective is to explore some Jupiter Trojan asteroids.
2022 – Psyche (NASA): the metallic asteroid 16 Psyche will be the object of investigation of this probe.

Exhibition of space probes placed on a table in the hall of a building. (Paulo Regis/Clube de Astronomia de Fortaleza – Brazil)

Some asteroids from the missions mentioned above have models available for 3D printing. The known catalog made by Greg Frieger is a great resource for printing them and increasing your exposure. If it is not possible, an alternative is to build asteroids with modeling clay and other low-cost materials. The IAU’s AstroEdu and NASA Science’s Make Your Own Asteroid websites are some good options. Try to put the spacecraft and asteroid models on the same scale to give your event a more realistic tone.

Don’t forget to register it online and report them later with images of your models and activity. We will be happy to share in our media!