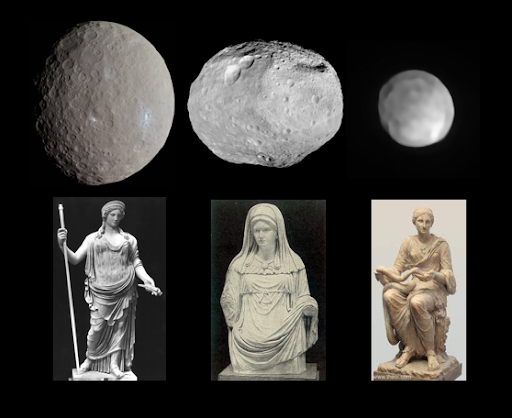 Learning Objective:
Learn how asteroids were named throughout history and how the rapid increase in asteroid discovery has influenced their naming convention.

Overview:
When the first asteroids were discovered, their naming sought to follow the tradition used for planets. As the decades passed and several asteroids were discovered thanks to the use of new technology, the sources of inspiration became more diverse. Currently, asteroid naming follows a convention. However, it does not mean that the discoverers cannot be creative.

Specifics:
Mythology-Inspired Asteroid Names
In the 19th century, the naming of the first asteroids discovered followed the tradition of using the names of Greco-Roman mythology deities, similarly to the planets. Interestingly asteroids were mostly named after female deities

The deities that gave their names to asteroids were Ceres, Pallas, Juno, Vesta, Astraea, Hebe, Iris, Flora, Metis and Hygiea. By the middle of the century, new asteroids were discovered. The first exception to the tradition was made in 1850, with an asteroid named after Parthenope, one of the Sirens in Greek mythology, who was not part of the pantheon.

New exceptions were made with the use of the Latin names of the French cities Marseille (Massalia) and Paris (Lutetia) in 1852. Four years later, an asteroid discovered in 1856 was named after the Egyptian goddess Isis. It was the first case of an asteroid name being inspired by Egyptian mythology.

Marseille (left) and Paris, first cities to give their names to asteroids (France Comfort/IStock)

Asteroids Names As a Tribute
Until 1857 the names of living people had been avoided and tributes were made implicitly, mostly by coincidence. The discovery of the asteroid Victoria was one of them. Officially it is the name of the Roman goddess of victory, but its discoverer, an Englishman, was a subject of Queen Victoria. The aforementioned asteroid Isis was also another example of implicitly honouring the daughter of its discoverer, who had the same name as the Egyptian goddess.

Naming asteroids after living people started with the discovery of the asteroid Eugenia, named after Empress Eugenia di Montijo, wife of Napoleon III, who was the nephew of Napoleon Bonaparte. 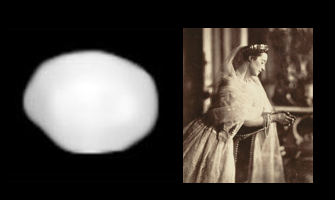 Asteroid Eugenia (left) and Empress Eugenia de Montijo, the first case of a person being honored directly in the naming of an asteroid. (VLT/Sphere / Gustave Le Gray – 1856)

The following year, the discovery of the asteroid Alexandra marked the first homage to a man. It was named in honour of the German explorer Alexander von Humboldt. Note that the asteroid’s name is the female version of the honoured explorer’s one. This trick was widely used to honour famous men while maintaining the tradition of using female names. Another example is the asteroid Columbia, named after the explorer Christopher Columbus. 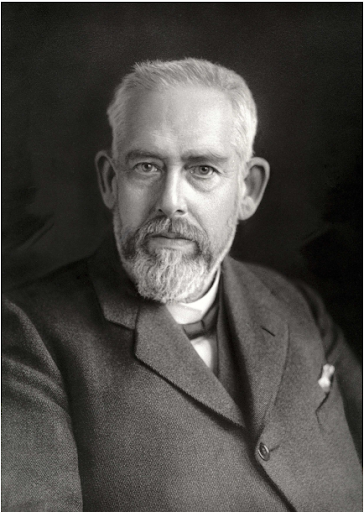 German astronomer Max Wolf, responsible for the first discovery of an asteroid using the technique of astrophotography. (Heldelberg Observatory Library)

In 1868 the number of asteroids discovered reached 100 and 11 years later this number doubled. It brought the necessity to widen the naming criteria, including the use of male names. Finally, in 1892 German astronomer Max Wolf used the mythological character Endymion to name one of his asteroids. It was the first case of the direct use of a male name for an asteroid.

Brucia, discovered in 1891 also by Max Wolf, was the first asteroid identified using astrophotography. This technique allowed an exponential increase in the discovery of asteroids and 30 years later the mark of 1,000 objects was exceeded. The use of new criteria to name them became more than a necessity at this point.

How Are Asteroids Named Today

When an asteroid is discovered today it receives a provisional designation, made up of numbers and letters that follow a sequence. The use of these designations began in 1892. Shortly after its creation in 1925, the International Astronomical Union (IAU) adopted the system that is in use to this day.

If an asteroid has a well-determined orbit confirmed by observations, it receives a permanent number. This number, as well as the provisional designations, are assigned by the Minor Planet Center.

The asteroid discoverer has the right to propose a name but it must follow certain rules: not to be longer than 16 characters, not to be offensive, not to have anything to do with political or military activities, not to be confused with any product or trademark, and not to coincide with other names of asteroids and moons in the solar system. These rules were adopted by the IAU in the 1980s in order to avoid polemics and the trivialisation of asteroid names.

Nowadays, with a large number of asteroids discovered, their names are often inspired by prominent people.

Asteroid Day also has an asteroid named in its honour – 248750 Asteroidday! It was proposed in 2017 by Matt Dawson, an English amateur astronomer for over 50 years, living in Luxembourg. Matt Dawson runs the NEA observing program at the Observatoire des Côtes-de-Meuse in France (on behalf of Luxembourg’s National Museum of Natural History).

That means that there is a chance that an asteroid can be named after you! It only takes an asteroid discoverer to propose it and a 15-person International Astronomical Union committee’s approval.