According to NASA, its first demonstration of an asteroid deflection technique was successful. For the very first time in history, humanity managed to modify the appearance and orbit of a natural object in space.

After the collision with the DART spacecraft, thousands of kilometres long tail was created on the asteroid Dimorphos. An amazing image of the asteroid’s new appearance was taken using the Southern Astrophysical Research (SOAR) Telescope in Chile.

With the force of the probe’s impact, a large amount of dust and debris from the asteroid was ejected into space. Gradually, this cloud of material began to interact with the solar wind and formed a tail. This process is similar to what happens with comets. 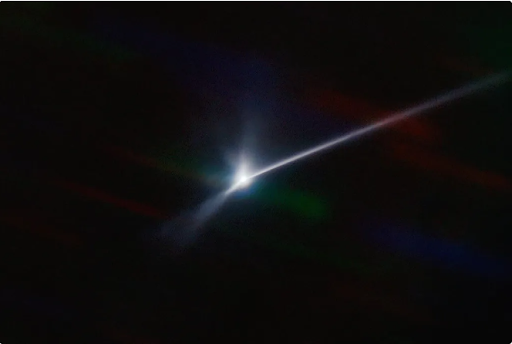 Post-crash images of the asteroid offer scientists the opportunity to study the nature of Dimorphos’ surface, allowing them to calculate how much material was lifted by the collision, the speed at which debris ejected and how it dissipated into space. They will also indicate whether DART lifted only a thin layer of dust from the surface or whether its impact was strong enough to lift large chunks of the asteroid.

Two weeks after the collision, subsequent analyses of the DART data confirmed that the spacecraft altered the asteroid’s orbit. Before impact, Dimorphos took 11 hours and 55 minutes to orbit Didymos, the other asteroid in the binary system. Telescope observations showed that the impact altered Dimorphos’ orbit, which is now 11 hours and 23 minutes. The mission team had estimated a minimum orbital period of 73 seconds or more, to consider the mission’s success. So the actual 27 minutes orbital period difference is beyond expectations.

Other results will be based on the analysis made by space and ground-based telescopes. The European Space Agency intends to launch the Hera mission in 2024 towards the binary system to show its new scenario and collect more accurate data.