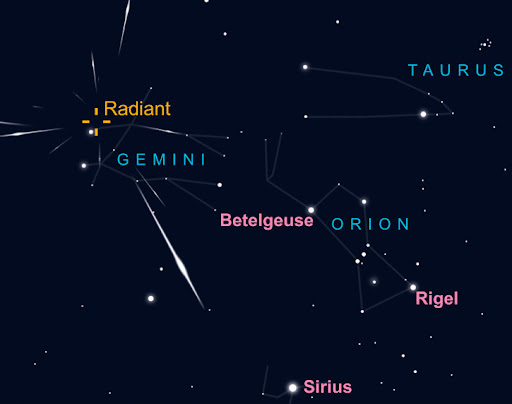 Meteor Showers In A Nutshell

A meteor, often known as a shooting star, is formed when fragments drifting through space penetrate Earth’s upper atmosphere. Friction with the atmosphere causes these particles to reach very high temperatures and catch fire. The luminous trail produced by this process is the meteor that we usually see at night. The size of the fragments that make up the meteors varies from a few millimetres to a few metres. The larger ones are rarer and can reach the Earth’s surface, becoming known as meteorites.

According to the Britannica dictionary, a small body starts its life as a meteoroid floating through space between the planets until it makes a bright streak of light in Earth’s atmosphere as a meteor and then, if it isn’t consumed by frictional heating, finally lands on the ground as a meteorite.

At certain times of the year, we can observe a much greater number of meteors during the night.

We call these events meteor showers and they are among the most accessible astronomical phenomena that one can observe without binoculars or telescopes. All it takes the observer is to find a comfortable position in a dark place and look in the right direction in the sky. 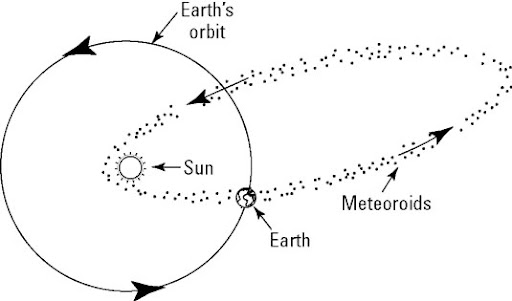 Illustration explaining the occurrence of a meteor shower (Astronomy For Dummies)

Comets are reputed to be responsible for causing meteor showers, but asteroids can also play that role. Some of these meteor showers originated from asteroids and are on the list of the easiest to observe during the year. They present a good opportunity for activities and events that allow direct observation of the sky and make your audience reflect on how fascinating asteroids are and how they don’t cease to surprise us.

There are two great opportunities to observe meteor showers caused by asteroids and you will see that the interval between them is relatively short and coincides with traditional vacation periods and the New Year festivities in many countries:

Geminids – The meteors of this shower can already be seen from November and their peak occurs in mid-December, with chances of exceeding 100 meteors per hour under ideal conditions. The shower has this name because the meteors seem to be coming from Gemini (The Twins), a constellation that can be easily located anywhere on our planet. It neighbours the famous Orion Belt. Find out more about Geminidis history and viewing tips here.

Quadrantids – This shower can be observed from the end of December and its peak occurs in the first days of the new year. The number of meteors per hour varies but it can approach 100 under ideal conditions. The name comes from an obsolete constellation, which existed until the 19th century and was removed after the introduction of the official definition of constellations by the International Astronomical Union in 1922. Northern Hemisphere observers have the advantage of seeing these meteors because they come from a region of the sky near the tip of the Big Dipper, a famous asterism with minimal visibility for observers in more southern latitudes. Further details of this shower can be found here.

Here are some suggestions for activities that will facilitate the understanding of meteor showers:

Many people are often confused by the terminology. It would be a good idea to make an introductory presentation explaining the differences between asteroids, meteoroids, meteors, and meteorites. This fun video from the Royal Observatory Greenwich can be a great conversation starter, especially if you’re talking to children.

It is also important to explain how it is possible for some asteroids to generate meteor showers. This lesson teaches about some peculiar asteroids that can acquire comet-like characteristics.

Present the asteroids responsible for these two meteor showers: 3200 Phaethon and (196256) 2003 EH1. The Eyes on Asteroids website is a wonderful tool that allows you to travel through these asteroids virtually. The meteorshowers.org website is also very useful for showing the orbit of the particles that generate the Geminids and the Quadrantids in 3D. 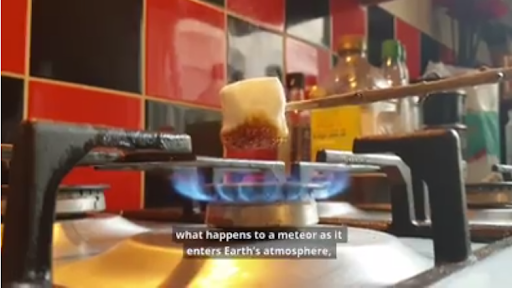 Keep your audience up to date with studies and news about these asteroids. Recently a team of scientists analysed several years of observations of 3200 Phaethon, the asteroid responsible for the Geminids, and noticed that its rotation speed is faster. Did you know that the Japanese space agency (JAXA) in partnership with the German Aerospace Centre (DLR) is planning a mission to explore this asteroid?

Consider doing a demonstration with marshmallows to show the effect of friction that a particle from space undergoes as it enters the Earth’s atmosphere and allows us to see them in the sky. Check out his video by the National Space Centre.

Astro Camping is an increasingly popular activity carried out at night in locations far from the lights of urban centres. This activity can be hosted on farms, ranches and large open-air locations. Good planning is necessary to avoid unforeseen setbacks. Here is a basic checklist: 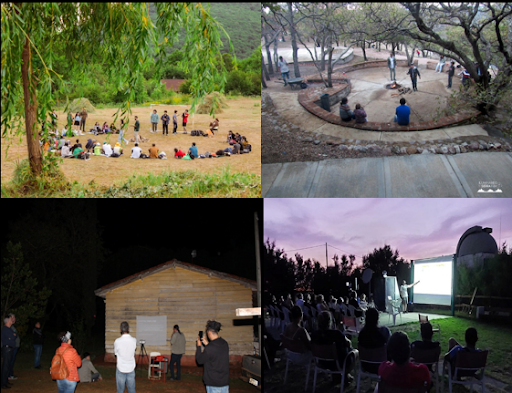 Consider combining fun activities with the observation sessions. See how many amazing things you can do:

With all these options you can turn a starry night into an unforgettable event. Don’t forget to register on our webpage and report it later.