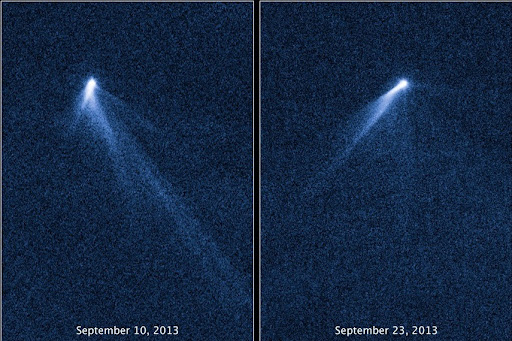 Learning Objective:
Learn that some asteroids may have characteristics of other celestial bodies including comets!

Overview:
Active asteroids have attracted the attention of scientists because they have the ability to create a tail like comets and to generate visible phenomena like meteor showers.

Specifics:
Active asteroids are small bodies in the Solar System that have the same orbital characteristics as common asteroids, but as they approach the Sun they produce a trail of ejected particles and dust.

The study of active asteroids is a relatively new field and their identification confuses astronomers. When detected, they are classified as comets because of their visual characteristics, with a tail. However, when analyzing their orbit it is concluded that they come from the Main Belt region. For this reason they are sometimes called rock comets or Main Belt comets.

A bit of history
In 1996, astronomers Eric Walter Elst and Guido Pizarro discovered an object with a tail that was later named comet 133P/Elst-Pizarro. Further analysis of its orbit concluded that this object had been observed before and was actually designated as the asteroid 1979 OW7.

Examples
The best example of an active asteroid is the 3200 Phaethon. Discovered in 1983 and known to be the first asteroid discovered through artificial satellite imagery.

Less than 6 km in diameter, Phaethon orbits the Sun in about a year and a half. As it gets closer to the Sun, Phaethon reflects more like other asteroids. The big surprise is that its surface is lit and heated so much that it releases particles and leaves a trail of them along its path.

Meteor Showers
Like comets, the trail left by these active asteroids crosses Earth’s orbit and can also produce meteor showers. For example, the Geminids, which peak between December 13th and 14th, are produced by particles ejected by the asteroid 3200 Phaethon.

Some orbital analysis proposes that Quadrantids, another meteor shower that peaks in the early days in January, could be produced by the asteroid 2003 EH1.

Scientific Value
Active asteroids are still not fully understood because few of these objects have been found.

Instabilities of the internal structure and cracks on the asteroid’s surface may explain the behavior of these celestial bodies. A study recently published suggests that the element sodium may be responsible for this active behavior of the asteroid 3200 Phaethon. As it approaches the Sun, the sodium in its interior heats up, exits through cracks in its crust, and is thrown into space.

There is a citizen science project launched by Northern Arizona University and funded by the National Science Foundation with the aim of identifying these objects in images taken by large telescopes.

Additionally, a mission to explore asteroid 3200 Phaethon has been proposed by the Japanese Space Agency (JAXA), with a planned launch in 2024.