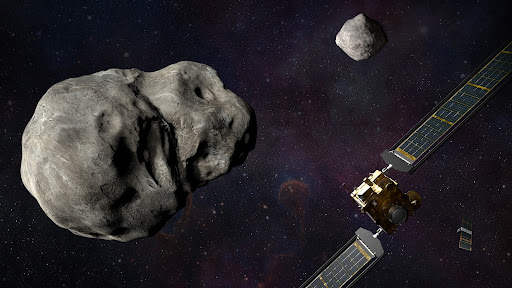 The Double Asteroid Redirection Test (DART) mission marks an important episode in the history of planetary defense. It will be the first real test aimed at protecting the Earth from dangerous asteroids.

The asteroid Didymos and its moon Dimorphos are the targets of this mission. These asteroids pose no danger to our planet, but their characteristics make them ideal candidates for testing a technique that could one day prevent an asteroid from threatening us.

When the general public thinks about planetary defense, first thoughts usually go to Hollywood depictions of last minute missions to blow them up – like those in Armageddon and Deep Impact, but there are a few better alternatives for protecting our planet. The launch of the DART mission is a great opportunity to explain what scientists believe could truly save us from a large asteroid impact. Simple activities can help describe these methods, raising awareness needed to support missions like DART in the future.

A theatrical presentation about the Earth protecting itself from the threat of asteroids can be a fun example of introducing children between 6 and 10 years old the importance of planetary defense. This activity organized by Spaceport India in this year’s edition of Asteroid Day can be adapted to explain the basics about planetary defense. Children can take on the roles of the key players in the DART mission. Who will play Didymos, Dimorphos and DART?

Small theater play made with students about the threat of asteroids, organized by Spaceport India.

For students 10-15, provide a lesson on the orbit of asteroids in the solar system and then discuss why scientists can determine if one is on a trajectory for earth years in advance.

For students 16+, encourage them to research some techniques suggested by scientists to protect our planet such as kinetic impactor, gravity tractor and laser ablation. Divide them into groups so that each one presents the chosen technique.

University students and those studying the field of geology, physics, mathematics and astronomy, can take a closer look into the DART mission and the role their studies play. They can also look at supporting missions and research, including ESA’s HERA mission, B612 Foundation and the European Commission’s NEO-MAPP Project.

Finally, for the general public, explain the importance of supporting public actions dedicated to planetary defense. Each application stage involves studies, strategies, technologies and cooperation between countries. Cite the work of non-profit organizations such as Asteroid Day to make these actions a priority.

Enjoy this moment and don’t forget to register your activity on the Asteroid Day page!

Luxembourg’s SnT is training the professionals of the future