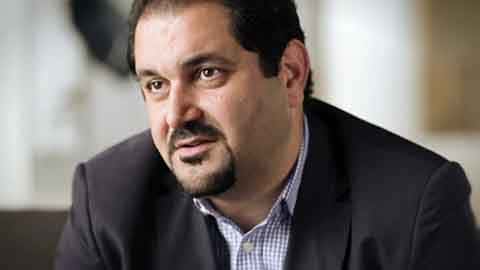 Shervin Pishevar was born in Tehran, Iran, the son of Abraham Pishevar, a television and radio executive, and Eshrat (Kordary) Pishevar, a teacher. 1979, just prior to the start of the Iranian Revolution, Abraham Pishevar was placed on Ayatollah Khomeini’s execution list for broadcasting instructions on leaving Iran for foreign nationals. In danger, he escaped to the United States, where he became a cab driver; his family joined him 18 months later in Silver Spring, Maryland, just north of Washington, DC. While driving a cab, Abraham Pishevar, who already held a Master’s Degree in Mass Communications from Catholic University in DC, studied for and received a Ph.D. in Mass Communication at Howard University.

Encouraged by his parents to pursue a career in medicine, Pishevar attended Montgomery Blair High School, a math and science and communications magnet school. As a science project, he began researching magainin peptide, and later, while majoring in molecular cellular biology at UC Berkeley, he received a Presidential Fellowship to continue the research. In 1996, Pishevar independently invented a new method for lysing Malaria-infected red blood cells; Berkeley filed a patent on the discovery, and Pishevar – then 19 – was credited as the sole inventor. The same year, he published an article linking gluccocortinoids treatments to seizures in Neuroscience Letters, and at 20, the Journal of American Medicine published a seminal article Pishevar co-authored that helped lead to the Istanbul Protocol, the first set of international guidelines for documentation of torture. It became a UN official document in 1999.

While a senior at Berkeley, Pishevar founded and served as Editor-in-Chief of Berkeley Scientific, the first peer reviewed undergraduate research journal in the nation. He graduated in 1998 with a BA in Interdisciplinary studies, and completed more than a year of graduate courses in health economics at the UC Berkeley School of Health.

Rather than go into a medical profession, Pishevar decided to become an entrepreneur and founded his first company, WebOS, when he was 23. WebOS (myWebOS) was the first company to create cross-browser windows-like interfaces for the internet and pioneered the concept of a Web-based operating system. As CEO, Pishevar assembled a team of leaders in the WebOS space, including Erik Arvidsson, Dan Steinman, Dan Saverise and Dr. Amin Vahdat. The company raised over $10 million in capital from Adam Dell’s Impact Venture Partners and Grotech Capital, among other investors. In a 1999 article in the Financial Times, Pishevar called WebOS “disruptive technology,” and rightfully predicted that it would change the dominant distribution of channels for software. In the same article, Pishevar was described as “Bill Gates’ worst nightmare.”

Also in 2001, Pishevar co-founded Ionside Interactive, and served as the company’s President, Director, and head of Product, Business Development and Sales. Creating an advanced 3D graphics and AI engine for the PocketPC, Pishevar led the product development on several software titles, including Argentum, now one of the best selling games of all time for the PocketPC platform. Argentum won several awards, including Computer Shopping Magazine’s Top 100 Products of 2002. Additionally, Pishevar co-founded Application Corporation, which created the Hyperoffice messaging and groupware suite.

In 2005, Pishevar was named Founding President, COO, and Board Member for Webs Inc. (formerly Freewebs). Raising $12m for the company from Novak Biddle and Columbia Capitol, Webs became one of the largest social publishing communities in the world. As of 2013, it had over 40 million members and was ranked as a top 150 internet site by Comcscore Media Matrix. Pishevar resigned his position in 2008, but served on the company’s board of directors until 2012. Pishevar founded the Gaming Social Network (GSN) in 2008. Raising $15m in Series A funding from investors including Greylock Capital, Founders Fund, Bezos Expeditions, Columbia Capital and Novak Biddle Venture Partners. A leading social and mobile gaming company, GSN was acquired by MindJolt in 2011. Pishevar has been a member of the GSN board of directors since 2010. In 2010, he was appointed chief application officer and GM at Mozilla Corporation.

In 2011, Pishevar joined Menlo Ventures, a venture capital fund with over $4billion under management, as a managing director. Focusing on the social web, consumer internet, and mobile, he sat on the board or worked closely with the teams at Uber, Machine Zone, Fab, and Warby Parker, and additionally led Menlo’s investment in Tumblr. Pishevar also helped launch the Menlo Talent Fund, a $20m seed fund which has invested in over 35 seed stage companies.

In 2013, Pishevar left Menlo Ventures to start Sherpa Ventures with Scott Stanford, formerly the co-head of Goldman Sachs’ Global Internet Investment Banking division; media outlets such as AllThingsD and TechCrunch have reported that Sherpa will introduce a new model to build and create companies through strategic corporate partnerships and collaborations with established entrepreneurs. A hybrid of an incubator, startup advisory, and venture capital fund, Sherpa Ventures includes Sherpa Fund and Sherpa Foundry, led by Tina Sharkey, a well-known Silicon Valley investor and executive. According to a SEC filing in June, 2013, Sherpa Ventures is seeking to raise $150m for the Sherpa Ventures Fund. In September 2013, Sherpa Ventures received a $15 million commitment from TPG Capital, a private equity company. Pishevar remains involved with Menlo as a venture adviser.

Pishevar was awarded three patents: US Patent # 7,155,490 (System and method for providing a web-based operating system); US Patent #6,384, 015 (Selected lysis of Malaria-infected erythrocytes) and US Patent # 7,085,825 (Apparatus, method and system for improving application performance across a communications network).

Pishevar is one of 10 members of the UN Foundation’s Global Entrepreneurs Council, and served as Entrepreneurial Ambassador on several State Department delegations to the Middle East and Russia. He was a keynote speaker the President Obama’s Summit on Entrepreneurship in Algeria, and was a member of the Technology, Media and Telecommunications policy working group that helped create the Obama Technology and Innovation Plan in 2008, and was one of a small group leaders in technology who met with President Obama in 2013 to address issues including unauthorized intelligence disclosures, HealthCare.gov, and the US government’s information technology.

In 2012, Pishevar was chosen by the United States Government as an “Outstanding American by Choice,” an honor which has recognized the achievements of only 100 naturalized Americans since the program launched in 2006. He was a Presidential Fellow at the University of California at Berkeley, IRTA Fellow at the National Institutes of Health and Summer Research Fellow at M.D. Anderson Cancer Research Center.

Pishevar is an advocate of the Startup Visa Act, which would create a new type of two year visa available to immigrant entrepreneurs. He is one of the creators of StartUpVisa.com, a website which provides information and builds grassroots support for the legislation. In 2011, Pishevar testified in favor of startup visas at a hearing held by a subcommittee of the House Judiciary Committee. Additionally, Pishevar is involved with the philanthropies Invisible Children and charity:water, and has traveled to Africa to volunteer with the organizations. Pishevar also announced the $100,000 Cyrus Prize for talented Iranians- the first Cyrus Prize will be awarded in 2014.

Pishevar, who has two children, lives in San Francisco. Pishevar is divorced. His brother, Afshin “AP” Pishevar, is an attorney, and his sister, Dr. Bita Pishevar-Haynes, is a clinical psychologist.