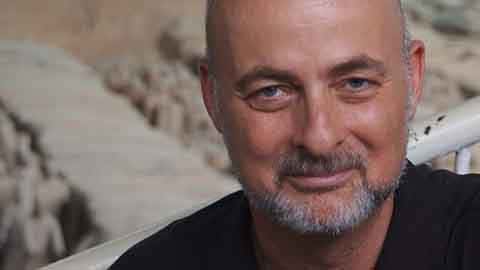 David Brin is a scientist, best-selling author and tech-futurist. His novels include Earth, The Postman (filmed in 1997) and Hugo Award winners Startide Rising and The Uplift War. A leading commentator and speaker on modern trends, his nonfiction book The Transparent Society won the Freedom of Speech Award of the American Library Association. Brin’s newest novel EXISTENCE explores the ultimate question: billions of planets are ripe for life. So where is Everybody? David’s main thread: how will we shape the days and years ahead — and how will tomorrow shape us? – See more, here.

BRIN the FUTURIST
We allocate much of our economy to weather reports, stock analyses, sports handicapping, financial and strategic planning… but well-grounded science and science fiction may be the greatest tool for exploring tomorrow.
Throw in curiosity about science- and tech-driven change, an immersion in history/anthropology, plus an avid belief in the potential of human civilization… and each of you could beome a “futurist” too!

SCIENTIST
Every science show that depicts a comet now portrays the model developed in my PhD research (UCSD 1981) — a spinning icy mass insulated by carbonaceous dust, with sun-heated, geyser-jets spewing particles into space. That work inspired my novel with Gregory Benford, Heart of the Comet, just before the 1986 Giotto mission confirmed the model. See the Astrophysical Journal paper “Three Models of Dust Layers on Cometary Nuclei” or an abstract of the dissertation: “Evolution of Cometary Nuclei as Influenced by a Dust Component.”
Other scientific papers that appeared in peer-reviewed scientific journals can be found on my bio page, on topics ranging from astrophysics to anthropology to psychology, philanthropy and dispute resolution, e.g.: “Neoteny and Two-Way Sexual Selection in Human Evolution,” (J. Social and Evolutionary Systems 18(3) 1996), speculates why we turned out so strange compared to other species. Or the lead article in the American Bar Association’s Journal on Dispute Resolution (15(3) 2000), “Disputation Arenas: Harnessing Conflict and Competition.”

working with ENTREPRENEURS
Forbes Magazine interviewed futurists on predicting business and societal trends. My biggest surprise was to see America swept by a major case of Alvin Toffler’s future shock when that ‘2’ arrived in the millennium column. I didn’t see it at first. It seemed folks were taking the milestone in stride. But masked beneath surface bravado, people passed through a phase of jittery alienation toward ‘the future,’ and the inevitability of change. One casualty: the assertive, pragmatic approach to negotiation and human-wrought progress that used to be mother’s milk to this civilization. Oh, but there are signs that future shock may be easing. We may be ready to resume the can-do spirit.

My nonfiction book, The Transparent Society: Will Technology Force Us to Choose Between Privacy and Freedom? (1997 Perseus/Addison Wesley) appraises threats to privacy and openness in the information age. It won the Freedom of Speech Award from the American Library Association. I have spoken on this topic for the World Bank and other major institutions. Why is it among the few public policy books from the 20th Century still selling well? See page 206 for one reason.
After September 11, 2001, I wrote a series of articles pointing out that ordinary citizens, armed with little more than knowledge, were the most effective defenders of our civilization.
The transparency page offers internet-accessible articles/interviews about how society copes.

EXPLORE the solar system?
For the Planetary Society we ask, ‘why the recent surge in planetary exploration?’

our inevitable FUTURE
On NEXT, host Mat Kaplan interviews David Brin and Paul Rosenbloom about our cyber future: Will humanity survive and even thrive when the Singularity arrives?