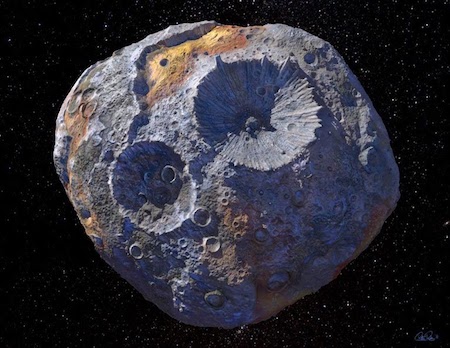 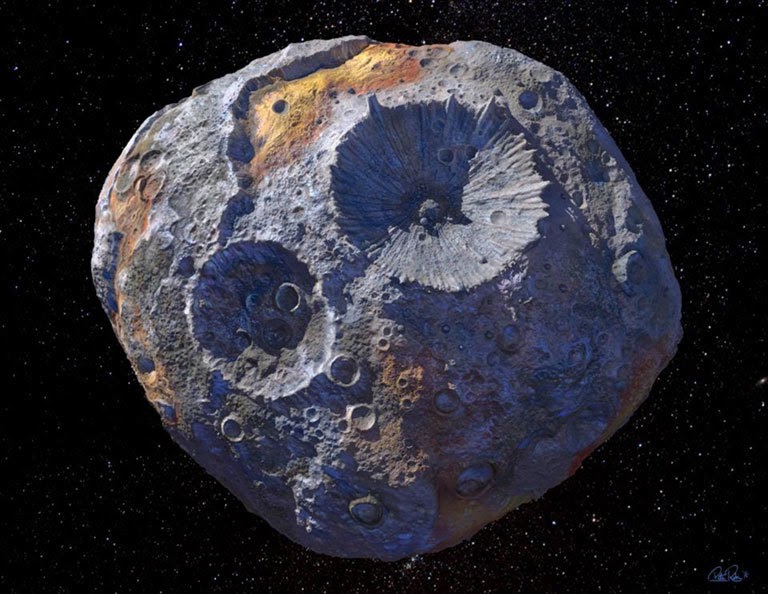 The massive asteroid 16 Psyche is the subject of a new study by SwRI scientist Tracy Becker, who observed the object at ultraviolet wavelengths. Credit: Maxar/ASU/P. Rubin/NASA/JPL-Caltech

At about 140 miles in diameter, Psyche is one of the most massive objects in the main asteroid belt orbiting between Mars and Jupiter. Previous observations indicate that Psyche is a dense, largely metallic object thought to be the leftover core of a planet that failed in formation.

A new study authored by Southwest Research Institute planetary scientist Dr. Tracy Becker discusses several new views of the asteroid 16 Psyche, including the first ultraviolet observations. The study, which was published on 26 October2020 in The Planetary Science Journal and presented at the virtual meeting of the American Astronomical Society’s Division for Planetary Sciences, paints a clearer view of the asteroid than was previously available.

“We’ve seen meteorites that are mostly metal, but Psyche could be unique in that it might be an asteroid that is totally made of iron and nickel,” Becker said. “Earth has a metal core, a mantle and crust. It’s possible that as a Psyche protoplanet was forming, it was struck by another object in our solar system and lost its mantle and crust.”

Becker observed the asteroid at two specific points in its rotation to view both sides of Psyche completely and delineate as much as possible from observing the surface at ultraviolet (UV) wavelengths.

“We were able to identify for the first time on any asteroid what we think are iron oxide ultraviolet absorption bands,” she said. “This is an indication that oxidation is happening on the asteroid, which could be a result of the solar wind hitting the surface.”

Becker’s study comes as NASA is preparing to launch the spacecraft Psyche, which will travel to the asteroid as part of an effort to understand the origin of planetary cores. The mission is set to launch in 2022. Metal asteroids are relatively rare in the solar system, and scientists believe Psyche could offer a unique opportunity to see inside a planet.

“What makes Psyche and the other asteroids so interesting is that they’re considered to be the building blocks of the solar system,” Becker said. “To understand what really makes up a planet and to potentially see the inside of a planet is fascinating. Once we get to Psyche, we’re really going to understand if that’s the case, even if it doesn’t turn out as we expect. Any time there’s a surprise, it’s always exciting.”

Becker also observed that the asteroid’s surface could be mostly iron, but she noted that the presence of even a small amount of iron could dominate UV observations. However, while observing Psyche, the asteroid appeared increasingly reflective at deeper UV wavelengths.

“This is something that we need to study further,” she said. “This could be indicative of it being exposed in space for so long. This type of UV brightening is often attributed to space weathering.”