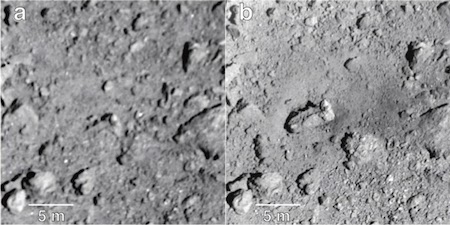 On 6 December 2020, JAXA’s Hayabusa2 spacecraft will arrive back at Earth to drop a canister into the Woomera Test Range in Australia. The canister will contain samples taken from asteroid Ryugu during two collection events in 2019.

The first manoeuvre, in February 2019, collected material from the asteroid’s surface. The second event, in April 2019, blasted an artificial impactor into the asteroid to expose some material from the sub-surface for collection. Now, according to new results, it turns out that the material blasted out of the way so that the spacecraft could retrieve its samples, can also provide vital information about the asteroid, and maybe even help predict the effect of asteroid deflection missions in the future. 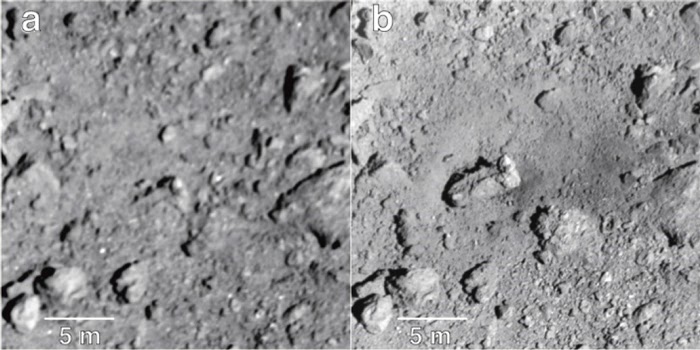 Professor Arakawa Masahiko, Graduate School of Science, Kobe University, Japan, and members of the Hayabusa2 mission team discovered that more than 200 boulders, ranging in size from 30 centimetres to 6 metres in diameter, had either newly appeared or been moved as a result of the impact. The effects extended out to boulders 40 metres away from the impact site.

Hayabusa2’s impactor was roughly 13 centimetres in diameter and hit with such force that it excavated a crater 14.5 metres in diameter. By comparing surface images before and after the impact, researchers found that 48 boulders in the post-impact image could all be traced back to their initial positions in the pre-impact image. They also counted 169 new boulders, ranging in size from 30cm to 3m in diameter, in the post-impact images. These had been thrown up to roughly 40m from the crater center.

Finally, the researchers estimated that the thickness of the layer of smaller ejecta created by the impact was between 1.0 millimetre to 1.8 centimetres in depth.

As well as characterising the impact event on Ryugu, such findings can be used as a benchmark for numerical simulations of small body impacts. These could be natural impacts or even the kind of artificial impact planned as part of the NASA’s Double Asteroid Redirection Test (DART). In other words, such results will help towards building a database of how an asteroid could respond to impacts, including attempts to deflect it for planetary defence reasons.

These results were presented at the 52nd meeting of the AAS Division of Planetary Science on 29 October in the session entitled Asteroids: Bennu and Ryugu 2.

Find out more about why researchers bring asteroid samples to Earth for analysis.