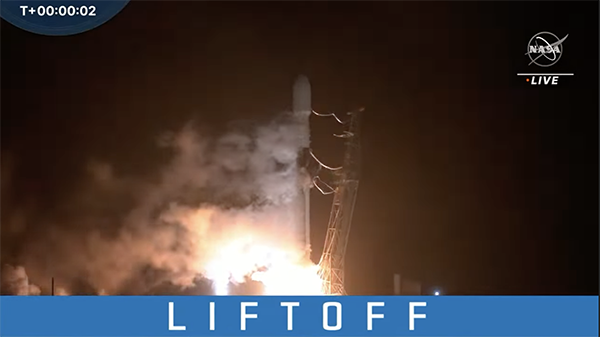 NASA’s Double Asteroid Redirection Test (DART) has launched. Blasting off at 1:21am EST from Space Launch Complex 4 East at Vandenberg Space Force Base, California, the mission is now on course for a fateful rendezvous with asteroid Dimorphos in September 2022.

DART was carried into space on a SpaceX Falcon 9 rocket. As with all launches, it required a sequence of precisely timed events to happen one after the other, once the rocket left the pad.

Two minutes and 33 seconds into the flight, the nine engines of the Falcon 9’s first stage shut down as planned. Three seconds later, the first stage separated and began to fall back to Earth, where 8 minutes and 52 seconds after launch, it touched down on SpaceX’s drone ship that was standing by in the Pacific Ocean.

Meanwhile, the second stage of the rocket continued to power DART into space, placing it in orbit around the Earth at around the same time that the first stage was landing on the drone ship.

At 28 minutes and 37 seconds after launch, as DART reached the designated spot in its orbit, the second stage rocket fired again for a 53 second burn that boosted the spacecraft out of Earth’s gravitational grip and onto its trajectory towards Dimorphos.

At 55 minutes and 40 seconds after launch, the spacecraft separated from the second stage. And finally, about two hours later, it unfurled its 8.5-metre-long solar arrays, and the mission began in earnest – which means that the clock is now ticking inexorably towards the spacecraft’s destruction.

Sometime between 26 September and 1 October 2022, the spacecraft will smash into asteroid Dimorphos while travelling at a speed of around 6.6 km/s. The impact is a test to see if Dimorphos’s orbit can be shifted. Such a ‘kinetic impact’ is a technique that could be used to deflect an asteroid if it were found to be on a collision course with Earth.

As such, DART represents a true watershed in planetary defence. “It is an indescribable feeling to see something you’ve been involved with since the ‘words on paper’ stage become real and launched into space,” says Andy Cheng, one of the DART investigation leads at Johns Hopkins Applied Physics Laboratory, Laurel, Maryland, “This is just the end of the first act, and the DART investigation and engineering teams have much work to do over the next year preparing for the main event ─ DART’s kinetic impact on Dimorphos. But tonight we celebrate!” 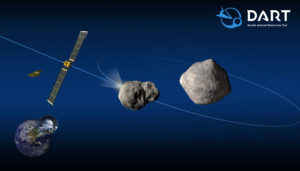 DART itself is not much larger than a large kitchen fridge, whereas Dimorphos is about the size of the Great Pyramid of Giza. So the impact is likely to change the velocity of the asteroid by less than a millimetre per second. However, this will be measurable because Dimorphos is in orbit around a larger asteroid called Didymos.

Currently, Dimorphos takes 11 hours and 55 minutes to complete an orbit around Didymos. Following the impact, current estimates suggest that the period could decrease by around 10 minutes.

This could be enough to avert disaster if a threatening asteroid were found early enough.

“We have not yet found any significant asteroid impact threat to Earth,” says Lindley Johnson, planetary defence officer at NASA Headquarters, “Our goal is to find any possible impact, years to decades in advance, so it can be deflected with a capability like DART that is possible with the technology we currently have.”

But the DART mission is only half of the story. To fully analyse its effects, in order to turn the impact experiment into a well-understood planetary defence technique, we need to know exactly what Dimorphos is like. This is where ESA’s Hera mission comes in.

Launching in 2024, Hera will arrive at Dimorphos in 2026 and will perform a detailed survey to fully characterise the asteroid. In addition, Hera will gather crucial scientific data, to help better understand asteroid compositions and structures.

Naomi Murdoch is a planetary scientist at ISAE-SUPAERO, Toulouse, France. She is also part of the Near Earth Object Modelling and Payloads for Protection (NEO-MAPP) project that performs advanced research into Near Earth Objects (NEOs) and new payload technologies for planetary defence.

Upon watching the launch, she told Asteroid Day, “After so many years of hard work both in the US and in Europe, it was wonderful to see DART finally leave Earth today and start its journey to the asteroid Dimorphos. Our role now is to be as prepared as possible to interpret the data coming from both DART, and the future Hera mission, in order to maximise our understanding of the asteroid and the consequences of the DART impact.”

You can watch a replay of the DART launch stream here.