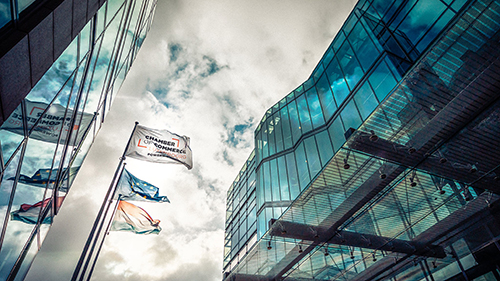 The main role of the Chamber of Commerce is to protect and promote the interests of businesses and the economy of Luxembourg. One of its goals in this regard, is to position Luxembourg as a hub for the growing space industry. 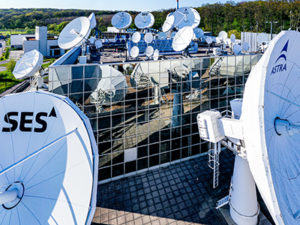 In fact, Luxembourg has nearly 40 years of experience in the space sector already. One could say that the space industry was woven into the DNA of the Luxembourg economy starting in the 1980s when, in 1985, the pioneering Luxembourg satellite company SES (Société Européenne des Satellites) was founded and a launch agreement was signed.

It was the first private satellite operator in Europe, and launched its first satellite, the ASTRA 1A, in 1988. Since that time, ASTRA has been the SES flagship satellite system in Europe, broadcasting more than 2,600 channels, including 675 in HD and 29 in Ultra HD, reaching an estimated 110 million homes in HD and 29 million homes equipped with Ultra HD TV sets.

Encouraged by this success, the Luxembourg Government made a strategic decision to further develop the space economy. This includes offering a number of financial tools to space entrepreneurs who are either already based in Luxembourg or considering a move to the country.

As a result, the country’s space sector now consists of more than 50 companies and two public research organisations that cover various segments of the industry. The contribution that the space sector makes to the nation’s GDP is amongst the highest in Europe.

And to ensure that this path continues into the future, Luxembourg has set up space-oriented education for its young people via the Interdisciplinary Space Master (ISM) at the University of Luxembourg.

In 2017, Luxembourg also became the first European country, and the second country worldwide after the US, to offer a legal framework to secure property rights for space resources. Recognising the need to harmonise the global rules surrounding the peaceful exploration and utilisation of space resources, the country aims to foster collaboration between key players to promote the development of policies and laws required for a sustainable space ecosystem. 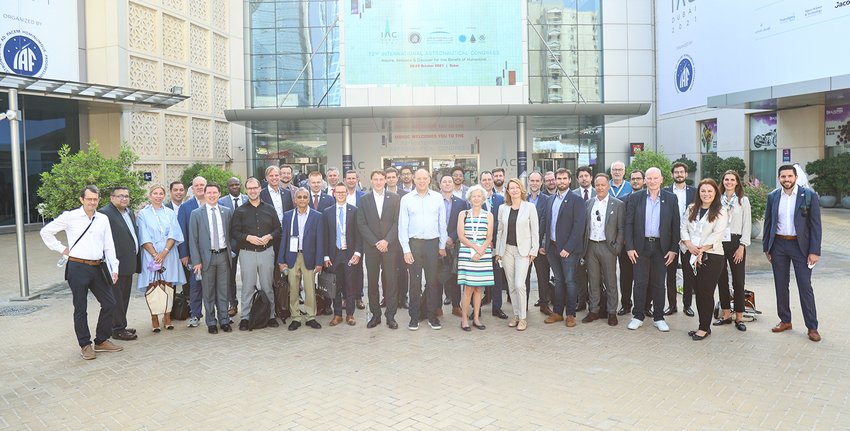 Day one of the Official Space Mission to Expo 2020 Dubai! The Luxembourg delegation of 80+ individuals attended the International Astronautical Congress (IAC) at the World Trade Center in Dubai. CREDIT: Luxembourg Chamber of Commerce

A recent example of the Chamber of Commerce’s commitment to bringing people together was the space delegation that it sent to the 2021 International Astronautical Congress (IAC). Held in the United Arab Emirates simultaneously with Expo 2020 Dubai, which was postponed by a year because of the pandemic, the IAC attracts more than 6,000 participants annually. It covers all aspects of the space sector, offering the latest developments from academia and industry. As such, it is a perfect place for networking, making contacts and discussing partnerships. 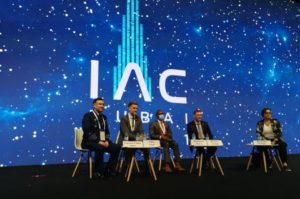 To ensure access for as many of Luxembourg’s space stakeholders as possible, the Chamber of Commerce subsidised half the ticket price for up to two representatives per registered space company. As a result, the delegation, headed by H.E. Mr. Franz Fayot, Minister of the Economy of the Grand Duchy of Luxembourg and attended by Luxembourg Chamber of Commerce CEO, Mr. Carlo Thelen, numbered more than 80 individuals, representing more than half of the space companies registered in Luxembourg.

At the conference’s official networking reception, Mr. Carlo Thelen emphasized to delegates that, “the space sector is a vibrant and fast developing sector in the Luxembourg economy.”

In parallel, Luxembourg is also nurturing the technology that will make resource utilisation practical and several technological agreements were also signed during the IAC and Expo.

The world’s first start-up company support programme dedicated to space resources was announced by the European Space Resources Innovation Centre (ESRIC), and a collaboration between ESRIC and Airbus Defence and Space on lunar resource extraction technologies.

“This new partnership with its bold ambitions is perfectly aligned with our mission of pushing the frontiers in research to develop high-impact innovation,” said Thomas Kallstenius, CEO of the Luxembourg Institute of Science and Technology (LIST), one of ESRIC’s partners.

Luxembourg-based company Maana Electric, who just opened a branch in Dubai, also had a presence at the conference as an exhibitor, showcasing their solution for producing photovoltaic cells with lunar sand. Meanwhile, ispace‘s rover will head to the moon as early as 2023 to collect lunar sand (known as regolith) and ship it back to Earth for analysis.

Other Luxembourg-based companies and institutions such as the University of Luxembourg, the SnT, and Redwire Space Europe took part in the technical sessions of the IAC, presenting their research on the world stage.

As the Luxembourg economy continues to grow, the space industry is only going to become more important and the Luxembourg Chamber of Commerce is set to help it every step of the way.

Watch CEO of the Chamber of Commerce Carlo Thelen on Asteroid Day LIVE in 2020 and 2021.
Learn more about the Chambers on their website.