LEARN – How can we characterize asteroids?

LEARN – How can we characterize asteroids?

Overview:
Successfully defending Earth from threatening asteroids means knowing them very well through a number of different methods and technologies.

In order to decide how best to prevent asteroid impacts on Earth, it will first be necessary to know them very well. Asteroids have varying sizes, shapes, compositions, densities and motions. Collecting all this information is crucial if we need alternatives to deflect them. Learn the ways to characterize asteroids:

Radar measurements: this method makes it possible to determine the shape, size, rotation, and reflection power of asteroids and identify the presence of a satellite in them. It works through antennas located on the ground that send radio waves to the asteroid and receive an echo back.

The Arecibo Observatory, disabled after its collapse in 2020, was responsible for observing more than half of the asteroids among all terrestrial radars. This work has mainly been continued by the Deep Space Network antennas, operated by NASA’s Jet Propulsion Laboratory (JPL). You can see one of these antennas in this 360° video. 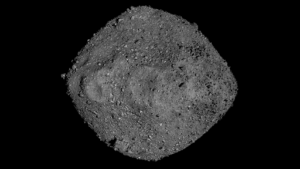 Asteroid 101955 Bennu, this time with detailed images obtained by the OSIRIS-REx spacecraft, which flew by and collected samples (NASA).

Space probes: They provide the best possible information about an asteroid because they go to the celestial body to collect data and samples. However, due to the exorbitant costs and complexities of these missions, this open is less available. NEAR-Shoemaker, Dawn, OSIRIS-REx and Hayabusa-2 are some examples of space probes that have provided images and detailed information of their target asteroids. The NEA Scout mission emerges as a low-cost alternative to explore them.

Infrared measurements: When an asteroid is hit by sunlight, it radiates part of it back as infrared light. The amount of this radiated light depends on the size of the exposed surface area. When infrared and visible light observations are combined, the reflective ability of a surface can also be determined. Infrared light observations provide scientists a more effective idea of asteroid sizes.

Telescopes such as Spitzer and NEOWISE have contributed to the location of NEOs by observing them in the infrared. The future Near-Earth Object Surveyor (NEO Surveyor) will continue the work of previous telescopes and will also have the ability to track asteroids coming from the direction of the Sun. 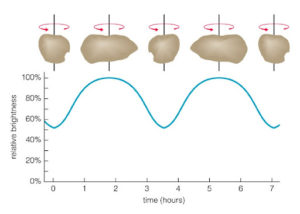 Light curves: this method consists of monitoring the variation of the intensity reflected by an asteroid in a certain period of time, which can be hours, days or months. An asteroid’s distance changes as it and Earth orbit the Sun, changing its brightness. When observed, comparing the brightness of an asteroid with the stars in the same field of view helps to produce these curves and makes it possible to know the period, the orientation of the axis of rotation and the shape of an asteroid. It is a method quite accessible to amateur astronomers and owners of more modest equipment.

Occultations: An asteroid occultation is when an asteroid passes in front of a star for a few seconds. In that short period, scientists can determine its shape, dimensions, position and if it has any satellites or ring systems around it. This technique is also very accessible to amateur astronomers who mobilize through campaigns and provides preliminary support in the characterization of asteroids that will later be studied more precisely.

Record of a stellar occultation by the asteroid 10199 Chariklo (ESO)

An example of this was the stellar occultation of Trojan asteroid 10199 Chariklo. Targeted by the astronomers supporting the Lucy mission, recording this occultation helped to estimate the size of the asteroid. That data was forwarded to the team to get an idea of the dimensions of other targets that are scheduled for the probe to explore.

New technologies: Projects such as Near Earth Object Modeling and Payloads for Protection (NEO-MAPP) have the function of developing new technologies to characterize asteroids. The Hera mission, which targets the binary asteroid Dydimos-Dimorphos, will characterize for the first time the internal properties of an asteroid thanks to those developed tools.

The Planetary Society – How Do We Characterize Asteroids? (video)

The taste of asteroids: delicious ideas to create in the kitchen