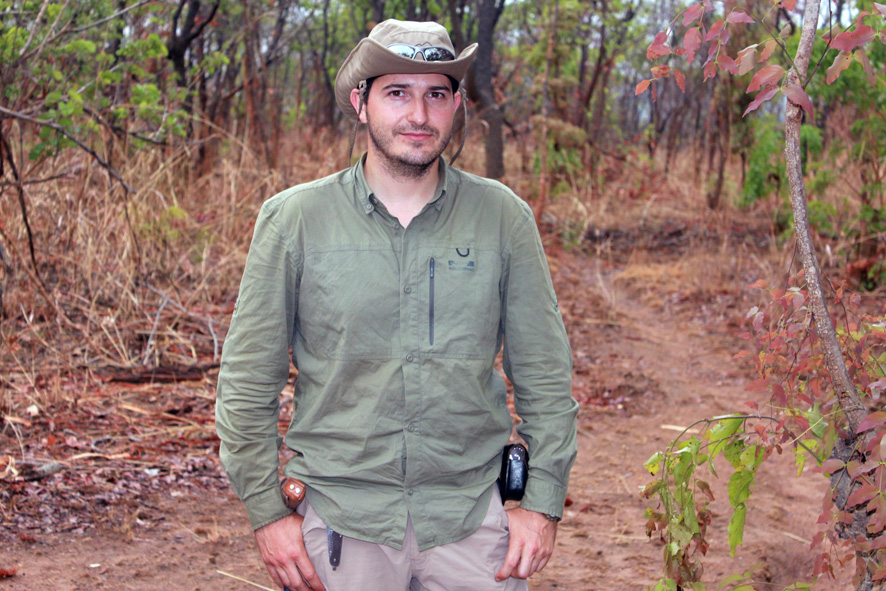 In our continuing reports on Asteroid Day organisers and events, today we are highlighting the work of Dr. Ludovic Ferrière. Ludovic currently works as curator of the rock collection and co-curator of the meteorite collection at the Natural History Museum Vienna in Austria. He became interested in various kinds of rocks at a young age and has since assembled a large collection of more than a 1,000 samples. Later on, at university, his passion for meteorite impact craters was born. A passion that drives his work (and travel destinations!) until today: The avid “impact craters hunter” managed to confirm 3 of the currently 189 recognised impact structures on Earth in the last few years.

In the past years, Ludovic took part in different activities with the public at the Museum in Vienna, but this year he will be in Australia attending a meeting on meteorite craters in June, and, thus, won’t able to participate in the activities in Vienna. Nevertheless, he was involved in the planning and programme of this special day in the Museum. On the 30th June itself, he will be on his way to the Wolfe Creek crater in Western Australia.

Asked about why he personally supports Asteroid Day, his answer was simple. Fascinated by asteroids and their (past) collisions with Earth, he wants to get other people excited about this topic and educate the public about previous impacts. He believes it is really important to promote asteroids and especially to raise awareness of what they are, what risks they pose – not only in the past, as in the extinction of the dinosaurs, but also in the future – and what we can do about this. But he also stresses that asteroids can tell us a lot about the universe and that there is a lot to learn from those that have struck Earth in the past. And this is where his passion for impact craters kicks back in.

Naturally, I had to ask him about what fascinates him about impact craters in particular. “Impact craters are very unique geological features that can be seen on almost all the bodies of our solar system, but on Earth they are in most cases hard to spot due to erosion or vegetal cover.” So he hunts for them across the world, “as it is a mix between a Sherlock Holmes investigation and an Indiana Jones adventure. You need to go in the field and look for unusual rocks (e.g. shatter cones). Then back in the lab you have to look at the samples under the microscope to be able to find shocked minerals – the equivalent of DNA or blood in a criminal case with no murderer to be found but the traces of an asteroid…”. To Ludovic, impact craters are great destinations to travel to, reasons to discover remote places and question their origins. “And when you find something, it is fascinating to try to reconstruct the event. First its age, then how big it was, and the effects it had.” 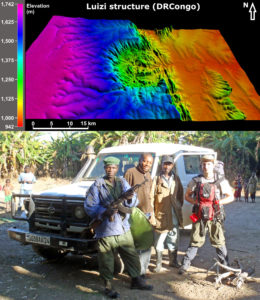 So what can we learn from impact craters?
“A lot! On other planetary bodies they give us access to rocks that would otherwise not be visible, buried hundreds of kilometres below the surface. They are also used to estimate the age of planetary surfaces!” And in the case of Martian or Lunar meteorites on Earth – pieces of rocks that were ejected from Mars or our Moon following asteroid impacts, eventually landing on Earth as a meteorite of their own –  they “allow us to investigate these rocks for free, with no need for a sample-return mission. On Earth, we can better understand the behaviour of rocks and minerals exposed to high pressures and temperatures by looking at the rocks affected by impacts. They can be used to estimate risks associated with future impacts.

And when asked why he is planning on visiting the Wolfe Creek Crater in particular, Ludovic had a surprisingly simple answer: He was going to be in Australia for the conference mentioned above anyways, and the organisers are taking the participants there. And it’s not just the Wolfe Creek Crater. Ludovic is a man on a mission: “One of my dreams is to visit all impact craters and structures on Earth. In fact all impact craters are of interest as each one is different. The target rocks differ from crater to crater and thus the setting is different. Some are old, other were formed very recently. Different erosion states allow us to see deeper into the crater in some cases.”

Clearly, Ludovic Ferrière uses his passion as an inspiration for his travels around the globe. In fact, every two years, he celebrates his birthday (the 21st October in case you want to get him a present!) at a new impact he hasn’t visited previously. This tradition started in 2013 at the Luizi Crater in the Congo (a structure that Ludovic and his team helped confirm as impact crater in 2011!). In 2015, he spent his birthday at the Jebel Waqf as Suwwan in Jordan. As for the next stop in 2017, he doesn’t have concrete plans yet. But he wants to inspire others to travel to such structures, whether abroad or near to their home, and poses a challenge to fellow asteroid aficionados: Why not travel to one such crater for Asteroid Day on 30th June and send a selfie from the impact crater in to Asteroid Day Global?

As a fan of travel destinations off the beaten path, I can only support this initiative. So what are you waiting for? You have 38 days left to plan your very own crater trip! Send your best photo to pol@asteroidday.org and we’ll publish them right here for the world to see! And if you don’t know where to find the meteorite impact structure closest to you, Ludovic’s website has a useful map available. Go explore!

How to watch Asteroid Day LIVE