A New Impact on Jupiter Captured by Amateur Astronomers

A New Impact on Jupiter Captured by Amateur Astronomers

On Sunday, March 20th, turmoil began online on web pages and popular social media sites among amateur astronomers. A few days ago reports of an impact on Jupiter began to circulate. Gerrit Kernbauer, an amateur astronomer from Mödling, Austria had captured a video of Jupiter in which he observed a flash of light that lasted about a second. A second video of the same occurrence was captured by John McKeon from north Dublin, Ireland, who searched for the impact after news of this event. So it was true: an unknown object had impacted the planet on March 17, 2016 at 00:18:33 UT. It hit the planet with so much energy, that the released light could be captured with modest size telescopes. Gerrit Kernbauer was using a telescope with an aperture of 20 cm and John McKeon a bigger 28 cm scope. If you had been observing the planet at that time with a telescope, you would have spotted a brief flash of light comparable to a +5 magnitude star appearing and disappearing smoothly in the planet. In the video by John McKeon, you can even see beautiful diffraction patterns of the bright point source on the right side the planet. 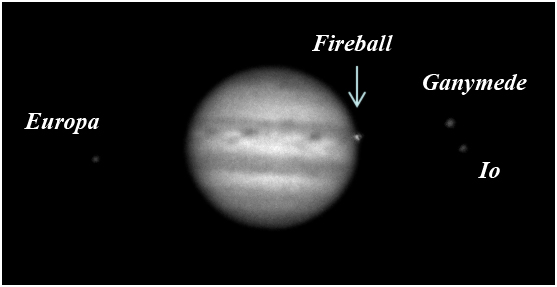 Preliminary processing of the video observation by John McKeon. The planet rotates from left to right so the impact area quickly disappeared minutes after the impact. The brightness of the impact fireball can be judged in comparison with the planet satellites. Image processed by R. Hueso.

Links to the videos:

We had to wait for half a Jupiter rotation to view the impact area again. Images acquired by different amateur astronomers showed no visible features of the impacted region. An example from an image obtained by Randy Cristensen from California shows that the object was small enough to leave no observable feature on Jupiter’s atmosphere. 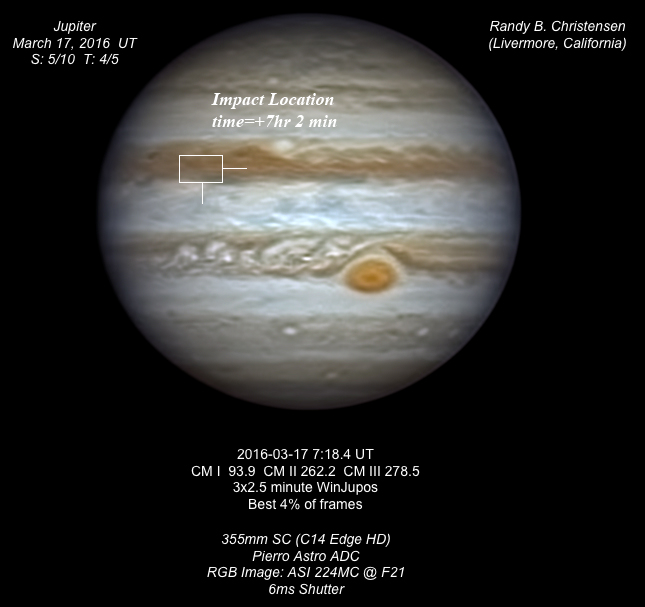 So, what did hit Jupiter? We don’t really know but impacts of this kind in our giant friend are more common than expected. In fact, this is the 4th time amateur astronomers observe a similar impact on Jupiter. The first one was observed by Anthony Wesley from Australia and Christopher Go from the Philippines in July of 2010. A second fireball or superbolide in Jupiter’s atmosphere was observed from Japan in August of 2010 by three amateur astronomers (Masayuki Tachikawa, Kazuo Aoki, and Masayuki Ichimaru) with telescope apertures in one case as small as 15 cm. A third fireball was observed in September of 2012 by Dan Petersen from Racine, Wisconsin on his telescope eyepiece resulting in an alert that reached to George Hall from Dallas, Texas who happened to have a video observation of the planet with the impact. All of these objects were dwarfed by a previous impact also discovered by Anthony Wesley in July of 2009. This was caused by an asteroid of 500 m and caused a large dark cloud of material in Jupiter’s atmosphere. This, in turn, was smaller than the amazing series of impacts that Jupiter received back in 1994 from the comet Shoemaker Levy 9. The four flashes of light observed since 2010 cannot be caused by large objects such as those big events in 1994 and 2009. Instead, the light emitted can be explained by the impact of modest objects with sizes about 10-20 m. This is the same range of sizes of the asteroid that hit Earth in Chelyabinsk in 2013. In Jupiter, these are much more energetic collisions since the gravity of the giant planet causes objects to impact it at a terrifying minimum speed of 60 km per second (almost 6 times larger than on Earth). Therefore, they release tremendous amounts of energy that can be observed from Earth, more than 600 million km away, by using small telescopes! …If you are lucky enough. Although there is no official analysis of the latest impact, the flash of light correlates with previous impacts and fits the description well.

Can we observe more of these? Of course. A recent study concluded that these objects impact Jupiter 10-50 times per year. Since Jupiter is more than 310 times more massive than Earth, Jupiter gets hits thousands of times more often and impacts are dozens of time more energetic than in our small and safe planet Earth. There is a small chance an individual astronomer will catch a glimpse of an impact on Jupiter, but it is more likely to occur when combining the “eyes” of the amateur community. However, we need a better way to inspect these observations. Amateur astronomers around the world observe Jupiter using fast video cameras that record thousands of frames a few minutes which combine into a single image that results in a gorgeous high-resolution image. Flashes are brief, faint and often lost by image reconstructing software. Marc Delcroix¸ an amateur astronomer from France, has developed a software tool  http://www.astrosurf.com/planetessaf/doc/project_detect.shtml) used widely among amateurs that is able to search for impacts in video observations of Jupiter and Saturn. An alternative is provided by the International Outer Planets Watch organization (http://www.pvol.ehu.es/software/).

Aside from being tremendously interesting, why are these Jupiter impacts important? Well, we don’t know Jupiter’s role in shaping the current structure of the Solar System. We don’t know if it’s the gravitational force which attracts these small objects to its orbit is cleaning our Solar System, making Earth a safer place where to live. We also don’t know anything about the population of these small objects that are traveling far from Earth. However, by observing collisions on Jupiter, amateur astronomers opened a new door of knowledge about our Solar System. A door we didn’t even know existed a few years ago.

Interview with Gerrit Kernbauer: Observing an impact on Jupiter