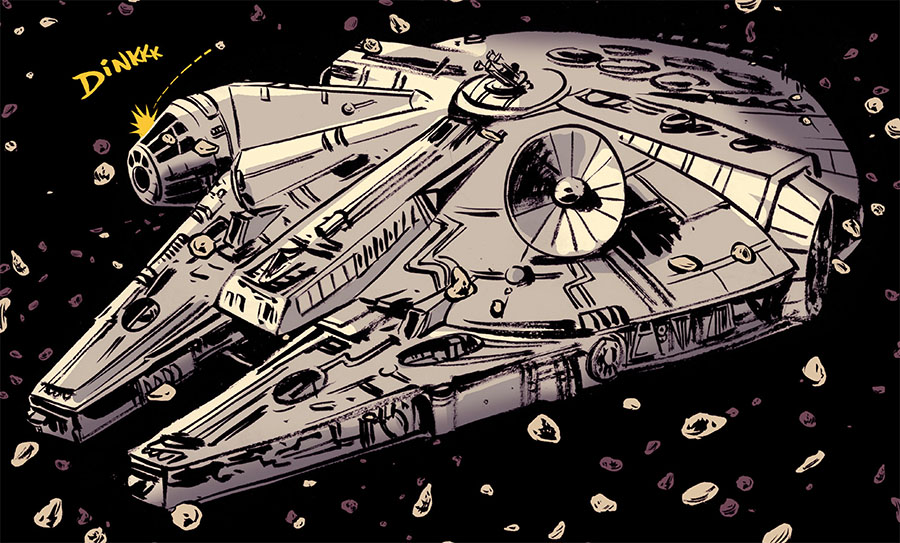 Misconception: In an asteroid belt, spaceships have to dodge a fusillade of oncoming rocks.

Actually: If you were in the middle of an asteroid belt, you probably wouldn’t see any asteroids at all.

A popular game in the early days of video games was Atari’s Asteroids. You would maneuver and spin a small triangular spaceship, blasting space rocks to bits until inevitably one of the asteroids smashes you into line segments. (Magically, the asteroids passed through each other unscathed.)

In space, it seemed, one had to continually dodge destruction. That was true in the “Green Lantern” movie in 2011 and perhaps most memorably in “Star Wars: The Empire Strikes Back.”

With the Millennium Falcon’s hyperdrive conked out and Imperial TIE fighters and star cruisers close in pursuit, Han Solo steers his spacecraft into a thicket of asteroids.

“They’d be crazy to follow us, wouldn’t they?” Han Solo replies.

C3PO, the fussbudget android, helpfully informs Han, “Sir, the possibility of successfully navigating an asteroid field is approximately 3,720 to 1.” (Statistics pedants point out that C3PO should have said, “approximately one in 3,720.”)

“Never tell me the odds,” Han says as the Millennium Falcon swerves past giant rocks left and right, top and bottom. One of the TIE fighters goes kaboom, then another.

Of course, that asteroid field was in a galaxy far, far away, but it was still silly. Asteroids — small, rocky chunks that never coalesced into a planet — would not be that close to one another for a simple reason: If they were big enough and close enough to pose a danger to a spaceship, they would also be banging into each other, themselves reduced to tiny pieces.