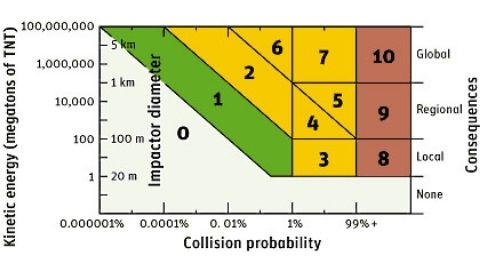 Overview:
Currently, scientists use two scales: the Turin Scale and the Palermo Scale. In this lesson, students will learn that these scales help translate into numbers the risks and consequences of an asteroid impact and which of these bodies have been known to reach higher levels.

Specifics:
The use of scales is a common feature in many knowledge areas. They serve to classify, assess intensities, risks and damages. We can cite as examples the Richter Scale for earthquakes, the Beaufort Scale for the winds and the Fujita Scale for tornadoes.

The impact threats of asteroids and comets, like these other natural disasters, are also measured on scales. Once an asteroid is discovered, its future orbit is calculated to check for the possibility of an Earth impact. When preliminary results point to impact risk, the asteroid is then categorised on the scale.

Diagram showing the Torino Scale criteria, describing the link between the probability of collision and the kinetic energy released by the impacting object.Credit: Richard P. Binzel

The Torino Scale
Presented in the 90s during a conference held in Torino, Italy, this scale is mostly used for public information and communication. Their values consider the energy associated with the impact as well as the probability of its occurrence.

It is divided into five colored zones and ranges from 0 – where the probability of a collision is effectively nil or the object will disintegrate in Earth’s atmosphere – to 10, where a collision is certain and could cause global devastation. The Torino Scale is defined only for potential impacts up to 100 years into the future. 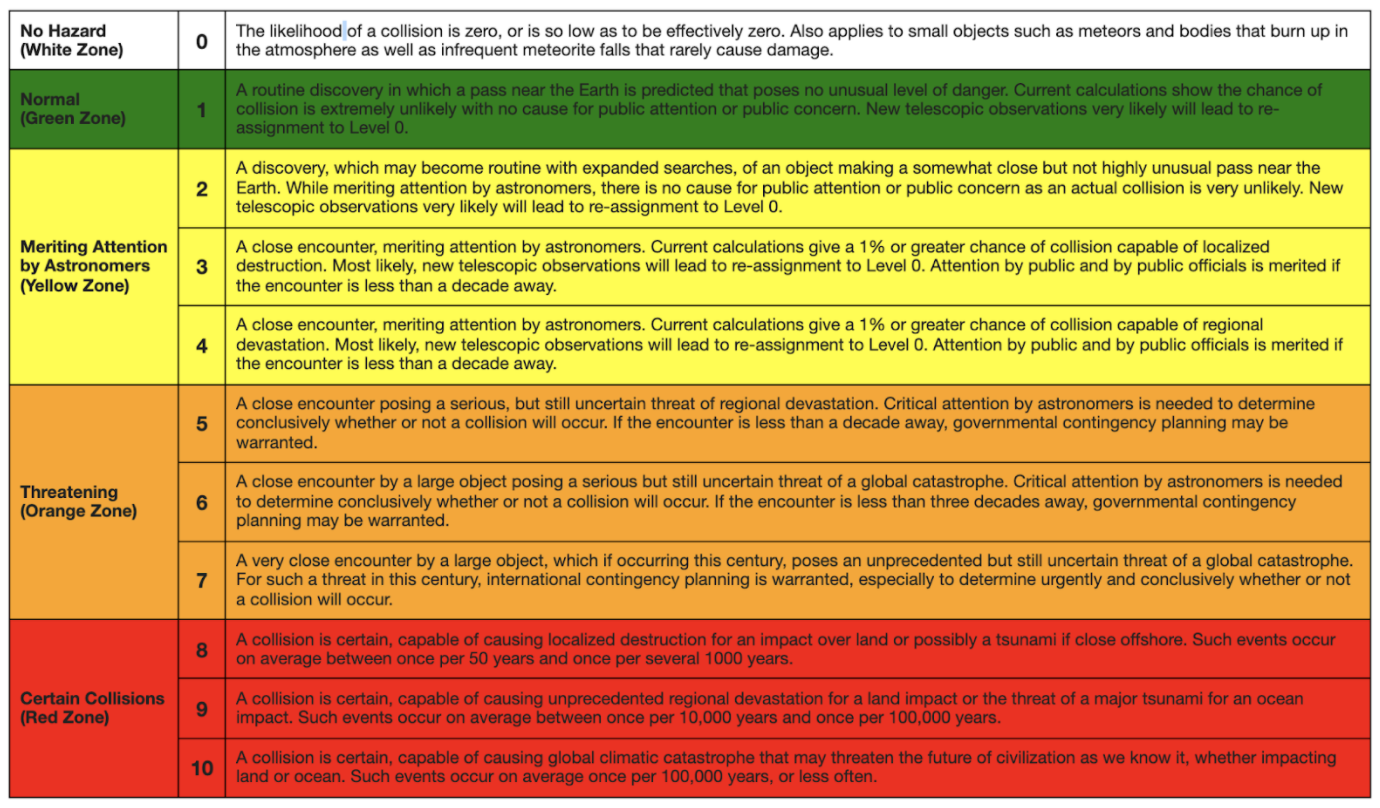 The Palermo Scale
Suggested by astronomers earlier this century, this logarithmic scale is more technical, detailed and better considers the uncertainties involved in the dynamic behavior of asteroids, specifically Near-Eﬁarth Objects (NEO).

On this continuous scale, the asteroid is given positive or negative numbers. The more negative its number, the less chance it will crash into Earth. If it receives a positive number, it means the risk is more serious and may be a reason for concern.

Asteroids that were once high risk:

Apophis – This asteroid has reached the highest level on a scale so far. Discovered in 2004, initial calculations of its orbit have already put this asteroid at level 4 on the Torino Scale and 1.10 on the Palermo Scale for its proximity to Earth in 2029. Refining its orbital data through later observations has downgraded Apophis on both scales until it was permanently removed after observations during its 2021 pass.

2004 VD17 – Also discovered in 2004, this asteroid reached the level 2 on Torino Scale for its predicted near pass 2102. Like Apophis, new observations refined its orbital data, being removed from the scale a few years later.

Bennu – The asteroid tops the list of objects ranked on the Palermo Scale. Even so, thanks to the data sent by the OSIRIS-REx probe, the chance of an impact with the Earth in the next century is quite reduced, presenting a negative value on this scale.

1950 DA – This asteroid first discovered in 1950 and faded from view, was found again in 2000 bringing bad news. Measurements of its orbit have predicted a potential impact chance for the year 2880, reaching 0.17 on the Palermo Scale. With the refinement of its orbital data, its ranking was changed in 2015, showing a negative index until then.

Both Bennu and 1950 AD are not categorized on the Torino Scale because the chances of future impact exceed 100 years.