LEARN – Do asteroids have moons? 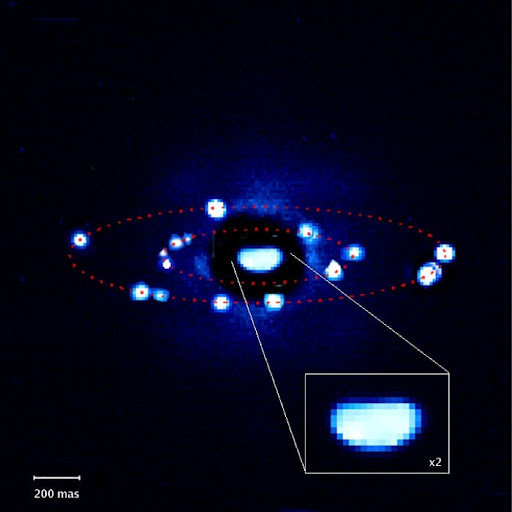 LEARN – Do asteroids have moons?

Learning Objective:
Explain how asteroids have moons and how they can be detected.

Overview:
Moons are not objects exclusive to planets in the Solar System. Asteroids may have their own natural satellites (ie. moons) and some of them have more than Earth.

Specifics:
Moons orbiting asteroids are not uncommon in the Solar System. By the end of last year, more than 200 asteroids with moons had been detected only in the Main Belt. Also known as “satellites”, the total number of asteroids with moons exceeds 400 if we also consider trans-Neptunian objects!

Asteroids with moons are typically formed when one asteroid collides with another. If the impact is at the specific speed and angle, it can rip off a chunk of rock and send it into orbit. If the impact is too strong, however, the debris goes off into space, getting rid of the main asteroid.

In some cases, a collision can split an asteroid into two similarly sized parts, orbiting the Sun together. Other pairs can form when a small asteroid is caught by the gravity of a larger one.

Historical Detections:
The first mentions of asteroidal satellites occurred about half a century ago. In the 1970s, asteroids 6 Hebe and 532 Herculina were the first objects that astronomers speculated could have companions after observing them occulting stars. In these occultations, the asteroid temporarily blocks the light from a star when seen by an observer on Earth. This block, which lasts a few seconds, is very useful for determining the physical parameters of asteroids.

This method of asteroid observation, long used before the era of space probes and the launch of the Hubble Space Telescope, had some inaccuracies. In the case of these two asteroids, other observations have not confirmed the existence of moons. The irregular and sometimes elongated shape of these objects can generate false positives.

The first confirmation of a moon orbiting an asteroid occurred during the Galileo mission in 1993. On its way to Jupiter, the probe passed just over 2,000 km from asteroid 243 Ida, sending images back to Earth. By analyzing these images, the mission team discovered an even smaller asteroid, approximately one-twentieth the size of Ida, gravitationally trapped. This little celestial body was named Dactyl.

A few years later, in 1998, a moon was discovered orbiting the asteroid 45 Eugenia. No spacecraft had ever passed close to this asteroid. The feat was done by the team of astronomers at the Canada-France-Hawaii Telescope, located in Mauna Kea, Hawaii. It was the first asteroidal satellite discovered through a telescope. 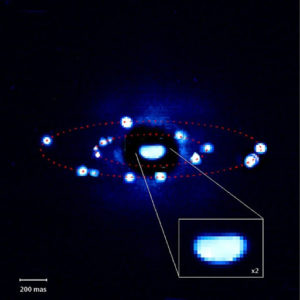 Image taken through adaptive optics showing the positions of two satellites orbiting the asteroid 87 Sylvia (the “potato” in the center). This image is a composition of several observation nights (ESO)

The same asteroid would reveal a big surprise in the next decade: a second moon was discovered in 2004 using the Very Large Telescope in Chile. Eugenia would be the first known asteroid to have two satellites, but this second moon was only announced in 2007. The historical record then went to the asteroid 87 Sylvia, which had its first satellite discovered about 20 years ago through the Keck Observatory’s telescope, also in Hawaii, and the second discovery in 2004, also by the Very Large Telescope, being announced shortly thereafter. 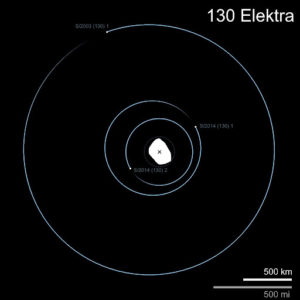 Diagram of the 130 Elektra quadruple system, seen directly above the primary rotation axis (centre). The orbits of the three satellites are colored blue and labeled with their respective provisional designations. Nrco0e; Hanus et al. (2017) for the Electra shape model.

Observations made with the VLT-SPHERE in 2014 revealed a third body orbiting the asteroid 130 Elektra. This new moon was announced in November 2021 by French astronomers Anthony Berdeu, Maud Langlois and Frédéric Vachier. This discovery made Elektra the first quadruple system identified in the Main Belt!

Detection methods:
The technology has greatly helped astronomers to increase the detection of these small moons, using other methods depending on the available equipment. For example, the discovery of moons on the asteroid 87 Sylvia was made using adaptive optics, a method in which equipment located on the Earth’s surface is able to produce images with a sharpness similar to that of space telescopes, correcting distortions caused by atmospheric turbulence.

Another method used is the radar image obtained by means of radio telescopes. This technique has focused on detecting NEAs (Near Earth Asteroids) and some satellites have been discovered in these objects. Recently, users of this method have suffered a great loss with the Arecibo Observatory collapse, responsible for the discovery of several NEAs, including small moons. 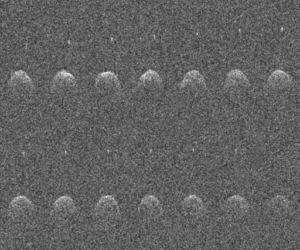 Radar image of asteroid 65803 Didymos with its satellite Dimorphos (the small dot above the asteroid) taken in 2003 by the Arecibo observatory.

Finally, a technique used and accessible also for astronomers with more modest equipment is photometry, the analysis of light curves. These curves are obtained by observing small eclipses and occultations involving the asteroids. Recording these phenomena may indicate that a nearby component may be affecting the asteroid’s observed brightness on Earth or contributing to the brightness of a background star decreasing more than expected.

Moment when a star was hidden by asteroid 10199 Chariklo in 2013. Analysis of the light curveallowed rings to be discovered around this asteroid (ESO).

In the case of occultations, the inconclusive results presented in the past are being overcome thanks to the creation of more sophisticated equipment, even discovering other structures orbiting the asteroids, such as rings.

El Firmamento has made Asteroid Day a tradition in Mendoza, Argentina