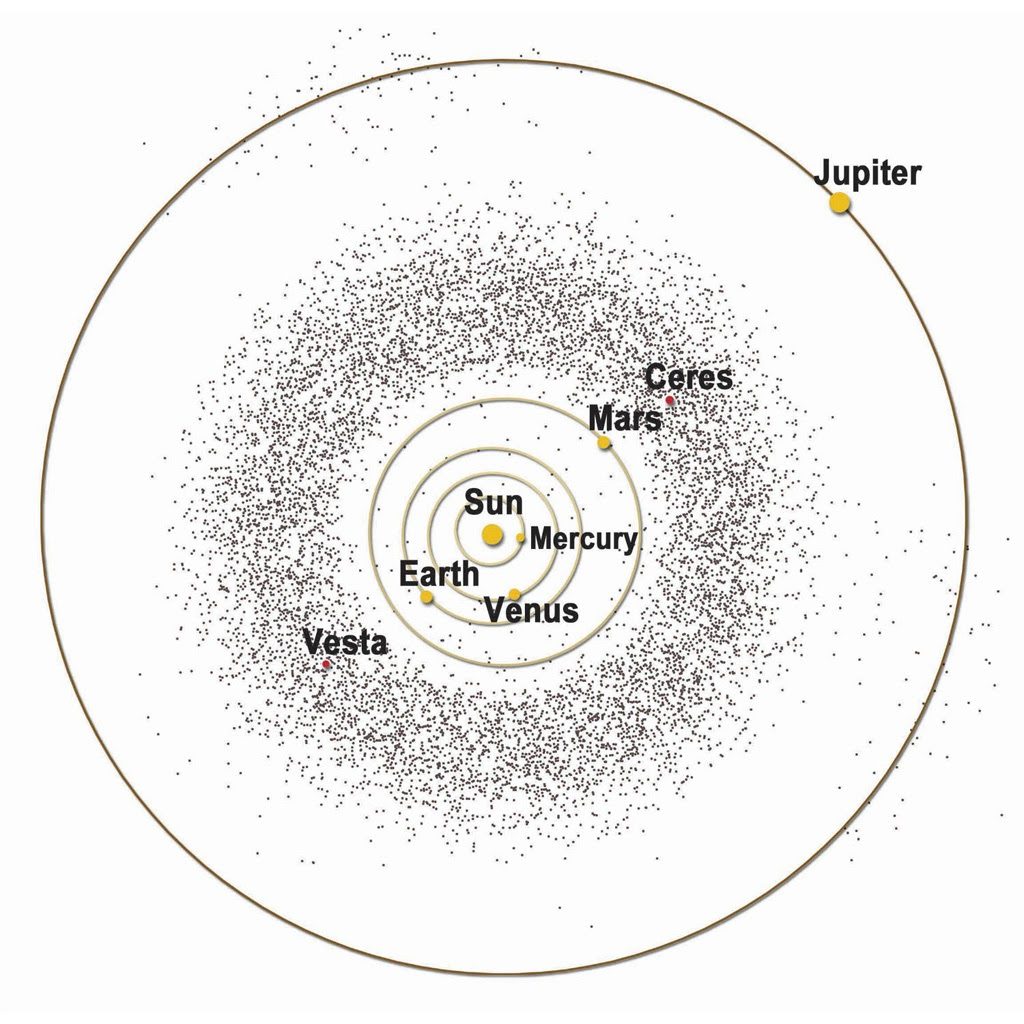 To learn how asteroids are distributed across the Solar System.

Asteroids are found mostly in a set of orbits between Mars and Jupiter. This is known as the asteroid belt. Other families of asteroids exist outside this main belt. 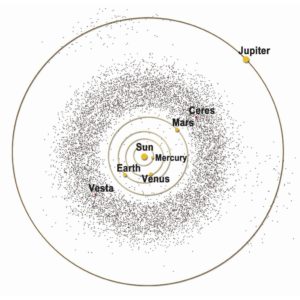 A schematic representation of the asteroid belt, including the large asteroids Ceres and Vesta. Credit: NASA/McREL

Soon after the discovery of Ceres, the first asteroid, 19th century astronomers found others. This made it clear that there were a collection of ‘minor planets’ in the solar system as well as the traditional major planets such as Earth, Mars and Jupiter.

The pace of asteroid discovery increased dramatically in the latter 19th / early 20th century, and it started to become clear that the vast majority of asteroids, or minor planets as they continued to be called, exist in a collection of orbits between Mars and Jupiter. This is a vast region of space stretching between 1.5 and 5 AU, where AU stands for astronomical unit and is the distance between the Sun and the Earth, or 150 million kilometers. Most of the asteroids can be found between 2 and 3.5 AU.

It is estimated that the asteroid belt contains between one and two million asteroids larger than 1 km in diameter, and many millions more smaller ones. Around a third of the asteroids in the main belt are grouped into ‘families’. This means that they share similar orbits.

Asteroid families were first proposed by the Japanese astronomer Kiyotsugu Hirayama in the second decade of the twentieth century. Since that time, the evidence has only grown. As well as orbital similarities, asteroid families also show similar spectral features in their light, which indicated similar chemical composition.

It is now thought that these families of asteroids were created by the break-up of larger parent bodies earlier in the history of the solar system. For example, the Flora group of asteroids is composed of more than 13,000 members.

While the vast majority of asteroids can be found in the main belt, there are other populations throughout the solar system.

The Trojan asteroids are minor bodies that share their orbit with Jupiter. They are corralled into gravitational sweet spots known as Langrangian points in front of and behind the planet. Although only thousands of Trojan asteroids are known, there are estimated to be about a million of them larger than 1 km. If true, this makes them almost as populous as the main best asteroids.

Beyond the main belt is a population of asteroids called the Centaurs. These mainly stay within the confines of the outer solar system. The first member of this distant population was discovered in 1920 and is called asteroid Hidalgo. Far away and difficult to study, Centaurs sometimes display comet-like characteristics, which may indicate a separate origin from the main belt asteroids.

There are also the near-Earth asteroids (NEAs). As the name implies these asteroids have orbits that bring them close to Earth’s orbit. If their orbit crosses ours, then they could one day pose a risk of collision. There are more than 22,000 NEAs, of which just under ten percent are currently thought of as potentially hazardous.

Within the main belt itself, asteroids are fairly stable. Their orbits do gradually change because of  gravitational interactions with Jupiter but largely they remain in their orbits. Those asteroids that do leave the belt because of these interactions, however, tend to be much less stable in their resulting orbits.

Away from the main belt, asteroids become subject to much larger gravitational perturbations by the planets they are now closer to. As a result, their orbits tend to evolve continuously. In the case of the near-Earth asteroids, this is one reason why the population needs to be continually monitored, in case a previously harmless asteroid is shifted onto a more dangerous path.

How to take Great Pictures of your Asteroid Day Event