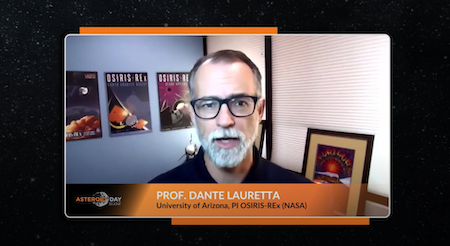 It is one of the most important questions in science: how did life begin on Earth. Now, after more than two centuries of discovery and study, planetary scientists have come to realise that asteroids may have played a leading role and these asteroid missions will tell us even more.

The asteroids are the ‘left-overs’ from the formation of the  planets in our solar system. As such, they are representative of the building blocks that composed the planets, and so their chemical composition is very important because this is what the early Earth formed from.

In this video, Prof. Dante Lauretta, University of Arizona, Principal Investigator of NASA’s OSIRIS-REx mission, explains that OSIRIS-REx specifically targeted asteroid Bennu because the asteroid is rich in organic compounds. These are molecules based around carbon, and could conceivably have been the chemical ‘seeds of life’ on the early Earth.

NASA’s OSIRIS-REx shares similarities with the Japan Aerospace Exploration Agency (JAXA)’s Hayabusa2 mission, which targeted asteroid Ryugu; another carbon-rich body. After almost 18 months of study, during which Hayabusa2 collected samples from the surface, the spacecraft left the asteroid behind and began its return journey to Earth. It is scheduled to return its asteroid samples to Earth in early December 2020.

OSIRIS-Rex will begin collecting samples from Bennu in October 2020, and will return those to Earth in September 2023. Both individually and together, the two sample sets will make a fascinating resource for planetary scientists to explore.

Asteroids Bennu and Ryugu are striking because of their similar shapes. Both resemble ‘spinning tops’ and recent research has even suggested that these two objects may have formed from the debris of the same disrupted body.  Yet Bennu appears water rich, while Ryugu is much drier.

As Prof. Lauretta explains, there is much that these asteroids can teach us about the origin of the solar system and maybe how life began on Earth. Find out more about other asteroid missions by signing up for our newsletter.