THE ORIGIN OF ASTEROIDS RYUGU AND BENNU REVEALED

THE ORIGIN OF ASTEROIDS RYUGU AND BENNU REVEALED

Asteroids Ryugu and Bennu could have formed from the debris of the same disrupted body according to a new study performed by Asteroid Day Expert Panel Member Patrick Michel (from the Université Côte d’Azur, Observatoire de la Côte d’Azur, CNRS, Lagrange Laboratorie), Ron Ballouz (University of Arizona)  and collaborators, who include Asteroid Day’s co-founder Brian May.

Asteroids Ryugu and Bennu have some striking similarities. The first is 1km in diameter, the second is 500 metres across. Both have apparently similar carbonaceous compositions, and both display a peculiar ridged equator that has been likened to the shape of a spinning top. The most striking difference between the two is their surface hydration levels. Ryugu is a drier celestial object than Bennu.

The origin of the spinning-top shapes in particular has proven difficult to understand, especially when such a shape (in particular the equatorial ridge) needs to be acquired early in the asteroid’s history. This is indicated by the presence of large craters on those ridges. However, new simulations by Michel and colleagues may have solved the problem – and provided another surprising connection between the two.

Both asteroids are low density objects, indicating that they are almost certainly re-assembled aggregates or ‘rubble piles’ resulting from the disruption of larger asteroids in the asteroid belt between Mars and Jupiter. Tens of asteroid families, each corresponding to a group of asteroids that share the same dynamical and compositional properties, have been identified in the asteroid belt. Each family represents the outcome of the disruption of a larger parent body. 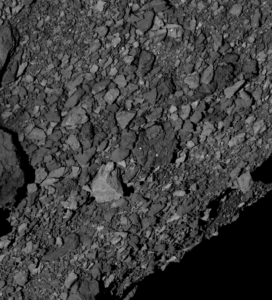 Previous calculations have shown that for every 100-km sized parent body that is disrupted in the asteroid belt, tens or hundreds of thousands of aggregate asteroids the size of Ryugu and Bennu could have been formed. Patrick Michel, who is a key contributor to Asteroid Day, and his collaborators were the first to demonstrate this result by employing numerical simulations on powerful computers in the early 2000s.

The new simulations looked at how the debris falls together to become the rubble pile asteroids. They took months to perform on the Bluecrab supercomputer cluster, operated by the Maryland Advanced Research Computing Center, USA, and show that many different shapes are possible, but depending on the amount of friction between the boulders composing the aggregates, there can be a tendency towards spheroidal bodies or spinning-top shapes similar to those of Ryugu and Bennu.

This is because in some cases,  the aggregating material forms a central disc that falls onto the equators of the newly forming aggregates, building an equatorial ridge characteristic of spinning tops. This new result demonstrates that it is possible for an asteroid to get this shape very early in its history, and even during its formation. This matches the constraints imposed by Ryugu and Bennu’s cratering record, which indicates that the equatorial ridge formed early. Another big surprise is related to the hydration levels in the various aggregates. 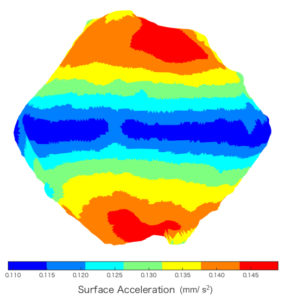 It had been thought that the different hydration levels in Ryugu and Bennu pointed to their parent asteroids being different. However, the simulations show that different parts of the parent asteroid can be heated to different degrees during the shattering process. The hotter parts of the debris are therefore dehydrated because the water is driven out of them. As a consequence, starting from a uniformly hydrated parent body, some aggregates, formed by the reaccumulation of the hottest material, will have a low hydration level. Others, formed by the reaccumulation of the less heated material, will have a higher hydration level.

This was a big surprise. It means that different agglomerates, formed in different areas of the debris field, can have different levels of hydration. In turn, this means that Ryugu and Bennu could be siblings, formed from the same parent asteroid that was smashed in smithereens by an impact long ago.

We’ll be able to check this idea in the not too distant future. The images of the asteroids that sparked this investigation were taken by two spacecraft. The Japanese Hayabusa2 mission went to Ryugu and America’s OSIRIS- REx is currently at Bennu. Both missions are also due to return samples of these asteroids to Earth for laboratory analysis.

Hayabusa2 returns the Ryugu samples late this year, while OSIRIS- REx is due to make its delivery of rocks from Bennu in September 2023. The analyses of these return samples will allow researchers to measure precisely the asteroids’ compositions and formation ages. If they match, both were once part of the same asteroid, and astronomers can fill in another branch of the asteroid family tree.

Collisional formation of top-shaped asteroids and implications for the origins of Ryugu and Bennu by Patrick Michel et al. is published in Nat Commun 11, 2655 (2020).

HOW MANY NEAR EARTH ASTEROIDS ARE THERE TO FIND?