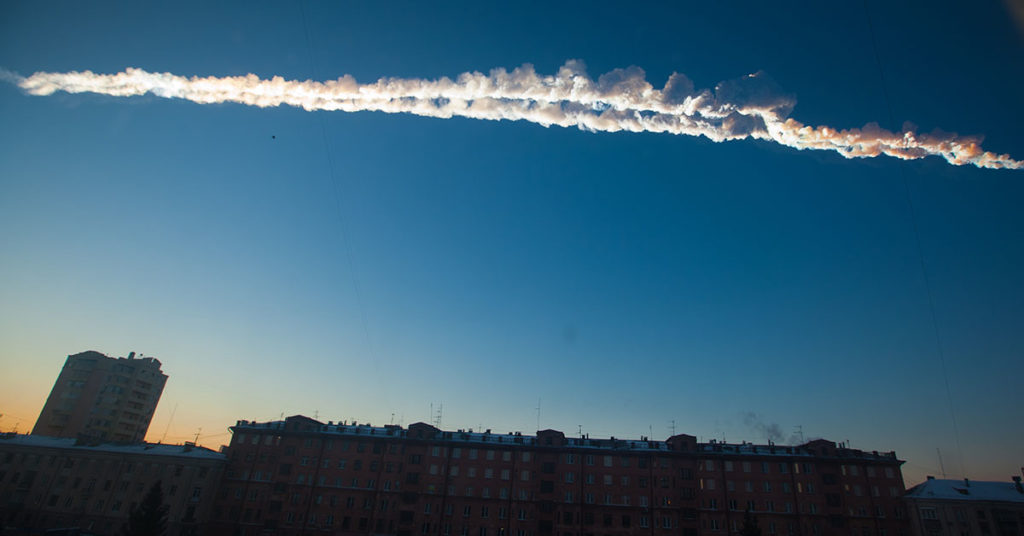 It is stated that the initial mass of this meteor was of the order of 10000 tons when it first entered the earths atmosphere, and that only about 5 or 6tons hit the ground! However there seems to be some argument as to what the initial mass of the meteor was composed of? If it was water ice, the large trail which I believe was 90 kilometres long and about two or three kilometres in diameter would account for the change of this mass of ice into a volume of steam and water vapour, at the atmospheric pressure at an altitude of approximately 28 kilometres, but why so bright? It seems amazing to me that this brightness of the trail appeared so bright when all this ice (if it was ice) was being converted into superheated steam and later vapour, in a very short space of time, and also the enormous amount of absorbed latent heat energy to convert 10,000 tons of ice into superheated steam! Most other metals or rock would oxidise and would appear very bright, but it is difficult to imagine why ice or water should oxidise in a similar manner. Was the temperature raised so high, that it was conceivable water was being split into hydrogen and oxygen and burning on the surface of the meteor due to friction with the atmosphere, raising temperatures even higher, and hence brightness? The relatively small amount which did fall to the ground was chrondite (a type of rock), but if whole meteor was of this material ,surely a much larger amount would have fallen to the ground?

We are pretty sure the rock coming into the atmosphere did not contain much, if any, ice. In such a small object (only about 20 meters or 60 feet across) ice would actually sublimate (turn to vapor) within just a few days in its slow orbit around the sun. Prior to impact, its orbit brought it much closer to the sun than Earth for long periods of time, heating it up above the temperature at which ice can exist.

Nevertheless, you are right to think that the debris trail might contain some water vapor. We think that most of the debris trail was made of fine dust that formed by condensation of vaporized asteroid itself. As the asteroid plunged through the atmosphere it compressed a layer of air and generated temperatures of tens of thousands of degrees, causing solid rock to vaporize. Some of it even dissociated (molecules broke down into atoms) and ionized (electrons came off the atoms) to form plasma. The kinetic energy per unit mass of rock dwarfed its latent heat of vaporization, so only a few bits that were somehow protected survived to reach the ground.

The brightness of the cloud was mainly due to sunlight scattering off the particles, much like what happens inside an ordinary cloud. Most of the dust is larger than the wavelength of sunlight so it tends to scatter all wavelengths equally, making it appear white. The contrast of a deep blue twilight sky and long dawn shadows in the foreground made the trail appear even brighter.