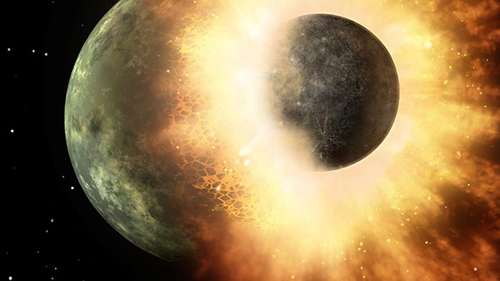 In 2008, a rain of meteorites landed in the Nubian Desert in Sudan, they were called Almahata Sitta. Since then, scientists have been studying every fragment they find in order to learn more about outer space. Still wondering where these rocks came from, new researches led us to believe they originated from a very big asteroid or protoplanet. These theories come from the study of diamonds found inside the Almahata Sitta meteorites.

On Earth, diamonds are used to study the structure and composition of deep layers of our planet. Formed under very specific conditions, these crystals are able to trap minerals that surround them when crystallizing. Their strength and stability allows the minerals to be preserved over several millions of years. For this reason, finding diamonds on a meteorite can tell us much about the composition of the rocks, at the formation stage of these crystals.

A team lead by Farhang Nabiei, from the École Polytechnique de Lausanne, in Switzerland, discovered specific elements inclusion in the diamonds, whose presence could only be explained if the diamonds had formed under very high pressure, about 200 000 times the pressure on Earth at sea level. These findings prompted two theories on the  meteorites origins.

The first regards a Mars-sized protoplanet, big enough to generate internal energy which would lead to the formation of a metallic core, surrounded by rocks. The crystals would have the formed close to the core, in high temperature and pressure conditions.

While the second theory leads us to believe that the crystals could have formed deep inside a protoplanet, about Mercury’s size, before being reduced into pieces due to a collision with another astronomical object.

What about our early solar system ?

The studies led on Almahata Sitta meteorites reinforced a theory about the early solar system. It suggests that at the very beginning of our solar system, 4,5 billion years ago, the sun was surrounded by protoplanets. Some of which grew into larger planets, while others succumbed to collisions with other bodies, thus being reduced into fragments. In some cases these fragments became carbon-rich asteroids orbiting the sun, whereas others arrived on Earth after several millions of years, allowing us once more to gain knowledge on the history of our solar system.

Stay tuned for our next Asteroid Day Briefing.

Feel free to share with us new articles that you find interesting at asteroidbriefing@asteroidday.org