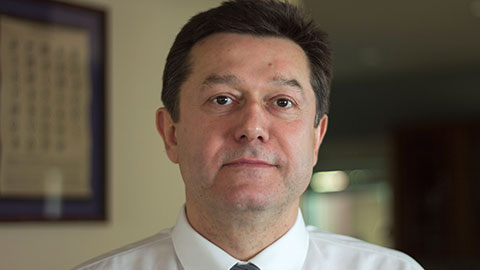 Željko Ivezić (pronounced something like Gel-co Eva-zich; Željko actually translates as Bill) obtained undergraduate degrees in mechanical engineering and physics from the University of Zagreb, Croatia, in 1990 and 1991. His life-long love with astronomy started in the third grade of elementary school when he joined the school astronomy club and the public Zagreb Observatory astronomy group, and this is why he still enjoys working with amateur astronomers and astronomy teachers.

Željko obtained his Ph.D. in physics from the University of Kentucky in 1995, where he worked on dust radiative transfer models and wrote the code Dusty. He moved on to Princeton University in 1997 to work on the Sloan Digital Sky Survey (SDSS), which turned out to be a life-changing experience. After spending seven fun years in Princeton, he took a professorship at the University of Washington, Seattle, in 2004.

Željko’s scientific interests are in detection, analysis and interpretation of electromagnetic radiation from astronomical sources. Thanks to his amateur roots in astronomy, he likes and appreciates all aspects of it, irrespective of methodology and source type. He has co-authored over 300 refereed publications, with a cumulative citation count of over 60,000 (h index=118). His current obsession is theLarge Synoptic Survey Telescope project (LSST), for which he serves as the Project Scientist and the chair of the LSST Project Science Team. In many ways similar to SDSS, which provided to us the first large digital color snapshot of the faint optical sky, LSST will deliver a movie of the night sky by collecting 100,000,000 GB of astronomical imaging data. Željko is also a member of the science advisory groups for the EVLA, VAO and LIGO projects.

Željko lives in Seattle with his most wonderful friend, supporter and wife Pam, and their lovely and cheerful daughter Vedrana.

And last, but not least, here is a list of Željko’s “academic children”: