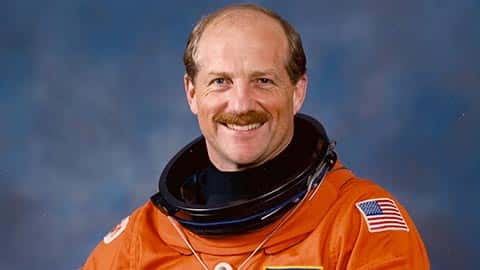 PERSONAL DATA: Born April 11, 1941, in Long Beach, California. His parents were the late Captain and Mrs. Philip F. Hauck. During his spare time, he enjoys skiing, sailing, kayaking, tennis, and working on his 1958 Corvette. Hauck is married to Susan Cameron Bruce. Together they have five children and eight grandchildren.

EDUCATION: Graduated from St. Albans School in Washington, D.C. in 1958; received a Bachelor of Science in Physics from Tufts University in 1962 and a Master of Science in Nuclear Engineering from the Massachusetts Institute of Technology in 1966; graduate of U.S. Naval Test Pilot School in 1971.

EXPERIENCE: As a Navy ROTC student at Tufts University, Hauck was commissioned upon graduation in 1962 and reported to the USS WARRINGTON (DD-843) where he served 20 months, qualifying as Underway Officer-of-the-Deck. In 1964, he attended the U.S. Naval Postgraduate School, Monterey, California, for studies in mathematics and physics and for a brief time in 1965 studied Russian at the Defense Language Institute in Monterey. Selected for the Navy’s Advanced Science Program, he received a Master’s in Nuclear Engineering from MIT the next year. He commenced flight training at the Naval Air Station, Pensacola, Florida, in 1966, and received his Navy wings in 1968. As a pilot with Attack Squadron 35 he deployed to the Western Pacific with Air Wing 15 aboard USS CORAL SEA (CVA-43), flying 114 combat and combat support missions.

In August 1970, Hauck joined Attack Squadron 42 as a visual weapons delivery instructor in the A-6. Selected for test pilot training, he reported to the U.S. Naval Test Pilot School at Patuxent River, Maryland, in 1971. A three-year tour in the Naval Air Test Center’s Carrier Suitability Branch of the Flight Test Division followed. During this period, Hauck served as a project test pilot for automatic carrier landing systems in the A-6 Intruder, A-7 Corsair II, F-4 Phantom and F-14 Tomcat aircraft and was team leader for the Navy Board of Inspection and Survey aircraft carrier trials of the F-14. During a test flight in 1973, he was forced to eject from an RA-5C Vigilante at low altitude when its fuel tank exploded. In 1974, he reported as operations officer to Commander Carrier Air Wing 14 aboard USS ENTERPRISE (CV(N)-65). On two cruises he flew the A-6, A-7, and F-14 during both day and night carrier operations. He reported to Attack Squadron 145 as Executive Officer in February 1977.

NASA selected Hauck as an astronaut candidate in January 1978. He was pilot for STS-7, the seventh flight of the Space Shuttle, which launched from Kennedy Space Center, Florida, on June 18, 1983. The crew included Bob Crippen (spacecraft commander), and three mission specialists, John Fabian, Sally Ride, and Norm Thagard. This was the second flight for the orbiter Challenger and the first mission with a 5-person crew. During the mission, the STS-7 crew deployed satellites for Canada (ANIK-C2) and Indonesia (Palapa B-1); operated the Canadian-built Remote Manipulator System (RMS) to perform the first deployment and retrieval exercise (with the Shuttle Pallet Satellite (SPAS-01)); and with Crippen he conducted the first piloting of the orbiter in close proximity to a free flying satellite (SPAS-01). Mission duration was 147 hours before landing on a lakebed runway at Edwards Air Force Base, California, on June 24, 1983.

Captain Hauck was spacecraft commander for the second mission of Discovery on mission STS 51-A, which launched on November 8, 1984. His crew included Dave Walker (pilot), and three mission specialists, Joe Allen, Anna Fisher, and Dale Gardner. During the mission, the crew deployed two satellites, Telesat Canada’s Anik D-2, and Hughes’ LEASAT-1 (Syncom IV-1). In the first space salvage mission in history, the crew also retrieved for return to earth the Palapa B-2 and Westar VI satellites. Discovery completed 127 orbits of the earth before landing at Kennedy Space Center, Florida, on November 16, 1984.

In March 1985, Captain Hauck became the Astronaut Office project officer for the integration of the liquid-fueled Centaur upper stage rocket into the shuttle. In May 1985, he was named Commander of the Centaur-boosted Ulysses solar probe mission (sponsored by the European Space Agency), scheduled to be launched in April 1986. After the Challenger accident, this mission was postponed, and the Shuttle Centaur project was terminated.

In August 1986, Captain Hauck was appointed NASA Associate Administrator for External Relations, the policy advisor to the NASA Administrator for congressional, public, international, intergovernmental, and educational affairs. He resumed his astronaut duties at the Johnson Space Center in early February 1987.

Hauck was spacecraft commander of Discovery on STS-26, the first flight to be flown after the Challenger accident. The mission launched on September 29, 1988. The flight crew included the pilot, Dick Covey, and three mission specialists, Dave Hilmers, Mike Lounge, and George (Pinky) Nelson. During the four-day mission, the crew deployed the Tracking and Data Relay Satellite (TDRS-C) and operated eleven middeck experiments. Discovery completed 64 orbits of the earth before landing at Edwards Air Force Base, California, on October 3, 1988. Hauck has logged more than 5500 flight hours, 436 in space.

In May 1989, Hauck became Director of the Navy Space Systems Division, in the Office of the Chief of Naval Operations. In this capacity, he held budgeting responsibility for the Navy’s space programs. Captain Hauck concluded his military active duty on June 1, 1990.

In October 1990, he became President and Chief Operating Officer of AXA Space, (formerly INTEC), a subsidiary of the international AXA insurance group, specializing in underwriting insurance for the risk of launching and operating satellites. On January 1, 1993 he assumed responsibilities as Chief Executive Officer. He retired from this position on March 31, 2005.