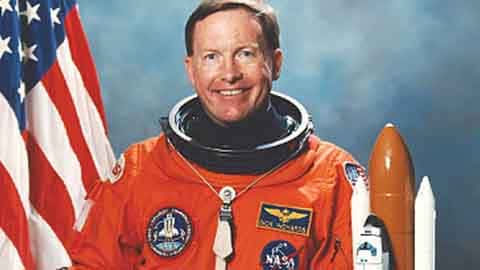 U.S. NAVY EXPERIENCE: Richards was commissioned an ensign in the United States Navy upon graduating from the University of Missouri in 1969 and was designated a naval aviator in August of the following year. From 1970 to 1973, he flew support missions in the A-4 Skyhawk and F-4 Phantom airplanes while assigned to Tactical Electronic Warfare Squadron Thirty-Three at Norfolk Naval Air Station, Virginia. He subsequently reported to Fighter Squadron 103 and deployed to the North Atlantic and Mediterranean aboard the USS America (CV-66) and USS Saratoga (CV-61), flying F-4 airplanes. Selected for test pilot training, he reported to the United States Naval Test Pilot School at Patuxent River, Maryland, in 1976. A tour in the Naval Air Test Center’s Carrier Systems Branch and F/A-18A Program Office of the Strike Aircraft Test Directorate followed Test Pilot School graduation. Over the next 3-1/2 years, Richards served as a project test pilot for automatic carrier landing systems development work in F-4 and A-7 aircraft and also conducted approach/landing/catapult flying qualities and catapult minimum end speed performance testing of a prototype “slatted” F-4S airplane. As carrier suitability project officer for the F/A-18A Hornet airplane, he made the first shipboard catapults and arrested landings during Initial Sea Trials of the F/A-18A on board the USS AMERICA in 1979. He was reassigned to Fighter Squadron 33 in May 1980 and was en route to that assignment when notified of his selection as an astronaut candidate.

Flight experience has included over 5,300 hours in 16 different types of airplanes. He has also completed more than 400 landings on board various aircraft carriers.

In August 1998, Richards left NASA to join the Boeing Company. Between 1998 and 2007 he supported NASA via Boeing’s Space Shuttle Sustaining Engineering Support Contract. Boeing has over 1000 employees across the United States involved with Space Shuttle flight operations. In 2007 Richards retired from Boeing as the Deputy Program Manager for Space Shuttle, and now lives in Houston, Texas.

SPACE FLIGHT EXPERIENCE: On his first space flight, Richards was pilot on the crew of STS-28 which launched from Kennedy Space Center, Florida, on August 8, 1989. The mission carried Department of Defense payloads and a number of secondary payloads. After 80 orbits of the Earth, this five-day mission concluded with a dry lakebed landing on Runway 17 at Edwards Air Force Base, California, on August 13, 1989. Mission duration was 121 hours, 9 seconds.

Slightly more than one year later, Richards commanded the crew of STS-41. The five-man crew launched aboard the Space Shuttle Discovery on October 6 from the Kennedy Space Center, Florida, and landed at Edwards Air Force Base, California, on October 10, 1990. During 66 orbits of the Earth, the STS-41 crew successfully deployed the Ulysses spacecraft, starting this interplanetary probe on its four-year journey, via Jupiter, to investigate the Polar Regions of the Sun.

In June 1992, Richards commanded the crew of STS-50 aboard the Space Shuttle Columbia. STS-50 was the first flight of the United States Microgravity Laboratory and the first extended duration Orbiter flight. Over a two-week period, the STS-50 flight crew conducted a wide variety of experiments relating to materials processing and fluid physics in a microgravity environment. At that time it was the longest Space Shuttle flight in history.

In September 1994, Richards commanded the STS-64 crew aboard the Space Shuttle Discovery. Mission highlights included: the first use of a space based laser for environmental research; deployment and retrieval of a spacecraft in support of solar wind and corona studies; robotic processing of semiconductors; maneuvering the robotic arm in close proximity to over 100 Shuttle reaction control system jet firings to measure forces imparted to a plume detection instrument in support of future Space Station/Shuttle rendezvous flights; first untethered space walk in 10 years to test a self-rescue jetpack. Mission duration was 10 days, 22 hours, 51 minutes.