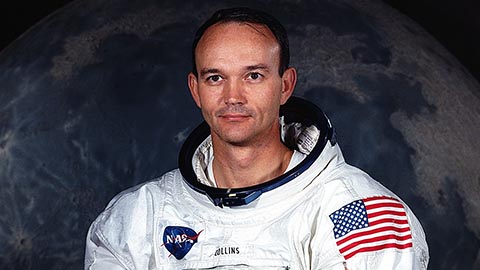 MICHAEL COLLINS (MGEN, USAF, RET.) NASA ASTRONAUT (FORMER) PERSONAL DATA: Born in Rome, Italy, on October 31, 1930. Married to the former Patricia M. Finnegan of Boston, Massachusetts. Three grown children (two daughters, one son). His hobbies include fishing and handball. EDUCATION: Graduated from Saint Albans School in Washington, D.C.; received a Bachelor of Science degree from the United States Military Academy at West Point, New York, in 1952. ORGANIZATIONS: Member of the Society of Experimental Test Pilots. Fellow of the American Institute of Aeronautics and Astronautics. SPECIAL HONORS: Presented the Presidential Medal for Freedom in 1969 and recipient of the NASA Exceptional Service Medal, the Air Force Command Pilot Astronaut Wings, and the Air Force Distinguished Flying Cross. PUBLICATIONS: “CARRYING THE FIRE” Farrar, Straus & Giroux, 1974. EXPERIENCE: Collins chose an Air Force career following graduation from West Point. He served as an experimental flight test officer at the Air Force Flight Test Center, Edwards Air Force Base, California, and, in that capacity, tested performance and stability and control characteristics of Air Force aircraft–primarily jet fighters. He has logged approximately 5,000 hours flying time. NASA EXPERIENCE: Collins was one of the third group of astronauts named by NASA in October 1963. He served as backup pilot for the Gemini VII mission. As pilot on the 3-day Gemini X mission, launched July 18, 1966, Collins shared with command pilot John Young in the accomplishments of that record-setting flight. These accomplishments included a successful rendezvous and docking with a separately launched Agena target vehicle and, using the power of the Agena, maneuvering the Gemini spacecraft into another orbit for a rendezvous with a second, passive Agena. Collins’ skillful performance in completing two periods of extravehicular activity included the recovery of a micrometeorite detection experiment from the passive Agena. Gemini X attained an apogee of approximately 475 statute miles and traveled a distance of 1,275,091 statute miles–after which splashdown occurred in the West Atlantic, 529 miles east of Cape Kennedy. The spacecraft landed 2.6 miles from the USS GUADALCANAL and became the second spacecraft in the Gemini program to land within eye and camera range of the prime recovery ship. Collins served as command module pilot on Apollo 11, July 16-24, 1969–the first lunar landing mission. He remained aboard the command module , “Columbia,” on station in lunar orbit while Neil Armstrong , spacecraft commander, and Edwin Aldrin, lunar module pilot, descended to the lunar surface in their lunar module “Eagle.” Collins performed the final redocking maneuvers following a successful lunar orbit rendezvous which was initiated by Armstrong and Aldrin from within the “Eagle” after their ascent from the lunar surface. Among the accomplishments of the Apollo 11 mission were collection of lunar surface samples for return to earth, deployment of lunar surface experiments, and an extensive evaluation of the life supporting extravehicular mobility unit worn by astronauts. Collins completed two space flights, logging 266 hours in space–of which 1 hour and 27 minutes was spent in EVA. He left NASA in January 1970, and is Director of the National Air & Space Museum, Smithsonian Institution, in Washington, D.C.JTNDYmxvY2txdW90ZSUyMGNsYXNzJTNEJTIydHdpdHRlci10d2VldCUyMiUyMGRhdGEtbGFuZyUzRCUyMmVuJTIyJTNFJTNDcCUyMGxhbmclM0QlMjJlbiUyMiUyMGRpciUzRCUyMmx0ciUyMiUzRUFwb2xsbyUyMDExJTIwYXN0cm9uYXV0JTIwTWljaGFlbCUyMENvbGxpbnMlMjBpcyUyMGFuJTIwJTNDYSUyMGhyZWYlM0QlMjJodHRwcyUzQSUyRiUyRnR3aXR0ZXIuY29tJTJGaGFzaHRhZyUyRkFzdGVyb2lkRGF5JTNGc3JjJTNEaGFzaCUyMiUzRSUyM0FzdGVyb2lkRGF5JTNDJTJGYSUzRSUyMHN1cHBvcnRlci4lMjBKb2luJTIwaGltJTIwYW5kJTIwdGVsbCUyMHlvdXIlMjBmcmllbmRzJTIxJTIwJTNDYSUyMGhyZWYlM0QlMjJodHRwcyUzQSUyRiUyRnQuY28lMkY4b1BpaE41YjgwJTIyJTNFcGljLnR3aXR0ZXIuY29tJTJGOG9QaWhONWI4MCUzQyUyRmElM0UlM0MlMkZwJTNFJTI2bWRhc2glM0IlMjBBc3Rlcm9pZCUyMERheSUyMCVFMiU5OCU4NCUyMCUyOCU0MEFzdGVyb2lkRGF5JTI5JTIwJTNDYSUyMGhyZWYlM0QlMjJodHRwcyUzQSUyRiUyRnR3aXR0ZXIuY29tJTJGQXN0ZXJvaWREYXklMkZzdGF0dXMlMkY3NTI4ODczNzc0MjU3OTcxMjMlMjIlM0VKdWx5JTIwMTIlMkMlMjAyMDE2JTNDJTJGYSUzRSUzQyUyRmJsb2NrcXVvdGUlM0UlMEElM0NzY3JpcHQlMjBhc3luYyUyMHNyYyUzRCUyMiUyRiUyRnBsYXRmb3JtLnR3aXR0ZXIuY29tJTJGd2lkZ2V0cy5qcyUyMiUyMGNoYXJzZXQlM0QlMjJ1dGYtOCUyMiUzRSUzQyUyRnNjcmlwdCUzRQ==