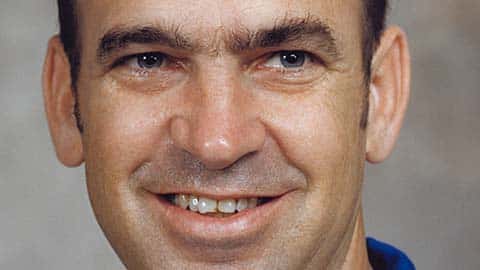 EXPERIENCE: Fabian, an Air Force ROTC student at Washington State University, was commissioned upon graduation in 1962. After an assignment at the Air Force Institute of Technology at Wright-Patterson Air Force Base, Ohio, he was assigned as an aeronautics engineer in the service engineering division, San Antonio Air Material Area, Kelly Air Force Base, Texas. He then attended flight training at Williams Air Force Base, Arizona, and subsequently spent 5 years as a KC-135 pilot at Wurtsmith Air Force Base, Michigan. He saw action in Southeast Asia, flying 90 combat missions. Following additional graduate work at the University of Washington, he served 4 years on the faculty of the Aeronautics Department at the USAF Academy in Colorado. He has logged 4,000 hours flying time, including 3,400 hours in jet aircraft.

NASA EXPERIENCE: Selected as an astronaut candidate by NASA in January 1978, and became an astronaut in August 1979. During the following years, he worked extensively on satellite deployment and retrieval activities, including development of the Canadian Remote Manipulator System. A veteran of two space flights, he has logged over 316 hours in space. He served as a mission specialist on STS-7 (June 18-24, 1983) and STS-51G (June 17-24, 1985). He was scheduled to fly next in May 1986 on STS-61G. This flight was one of several deferred by NASA in the wake of the Challenger accident . Fabian left NASA on January 1, 1986 to become Director of Space, Deputy Chief of Staff, Plans and Operations, Headquarters USAF.

Colonel Fabian retired from the USAF in June 1987 and joined Analytic Services Inc (ANSER), a non-profit aerospace professional services firm in Arlington, Virginia, where he is now President and Chief Executive Officer.

SPACE FLIGHT EXPERIENCE: Fabian first flew as a mission specialist on STS-7, which launched from Kennedy Space Center, Florida, on June 18, 1983. This was the second flight for the Orbiter Challenger and for the first mission with a 5-person crew. During the mission, the crew deployed satellites for Canada (ANIK C-2) and Indonesia (PALAPA B-1); operated the Canadian-built Remote Manipulator System (RMS) to perform the first deployment and retrieval exercise with the Shuttle Pallet Satellite (SPAS-01); conducted the first formation flying of the Orbiter with a free-flying satellite (SPAS-01); carried and operated the first U.S./German cooperative materials science payload (OSTA-2): and operated the Continuous Flow Electrophoresis System (CFES) and the Monodisperse Latex Reactor (MLR) experiments, in addition to activating seven Getaway Specials, Mission duration was 147 hours before landing at Edwards Air Force Base, California, on June 24, 1983.

On his second mission, Fabian flew on STS 51-G which launched from the Kennedy Space Center, Florida, on June 17, 1985, and landed at Edwards Air Force Base, California, on June 24, 1985, after completing approximately 170 hours of space flight. This international crew deployed communications satellites for Mexico (Morelos), the Arab League (Arabsat), and the United Stated (AT&T Telstar). They used the Remote Manipulator System (RMS) to deploy and later retrieve the SPARTAN satellite which performed 17 hours of x-ray astronomy experiments while separated from the Space Shuttle. In addition, the crew activated the Automated Directional Solidification Furnace (ADSF), six Getaway Specials, participated in biomedical experiments, and conducted a laser tracking experiment as part of the Strategic Defense Initiative.