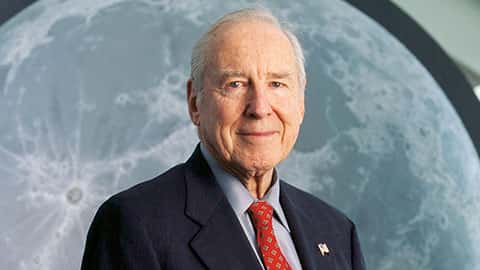 AFFILIATIONS: Trustee of the National Space Institute; Fellow of the Society of Experimental Test Pilots; member Explorers Club; Fellow – American Astronautical Society; Captain Lovell is on the Board of Directors of the Federal Signal Corporation; Astronautics Corporation of America; Astronaut Memorial Foundation; Captain Lovell is also on the Sports Medicine Advisory Board at Rush Presbyterian – St. Lukes Medical Center. He is a regent emeritus for the Milwaukee School of Engineering; on the board of trustees of Lake Forest College; a trustee of the National Space Institute, the Association of Space Explorers; and the Chairman of the National Eagle Scouts Association.

EXPERIENCE: During his Naval career he has had numerous aviator assignments, including a 4-year tour as a test pilot at the Naval Air Test Center, Patuxent River, Maryland.

While there he served as Program Manager for the F4H “Phantom” Fighter. A graduate of the Aviation Safety School of the University of Southern California, he also served as Safety Engineer with the Fighter Squadron 101 at the Naval Air Station, Oceana, Virginia.

On December 4, 1965, he and Frank Borman were launched into space on the history-making Gemini 7 mission. The flight lasted 330 hours and 35 minutes and included the first rendezvous of two manned maneuverable spacecraft.

The Gemini 12 mission, commanded by Lovell with Pilot Edwin Aldrin, began on November 11, 1966. This 4-day, 59-revolution flight brought the Gemini program to a successful close. Lovell served as Command Module Pilot and Navigator on the epic six-day journey of Apollo 8 – man’s maiden voyage to the moon – December 21-27, 1968. Apollo 8 was the first manned spacecraft to be lifted into near-earth orbit by a 7-1/2 million pound thrust Saturn V launch vehicle; and Lovell and fellow crewmen, Frank Borman and William A. Anders, became the first humans to leave the Earth’s gravitational influence.

He completed his fourth mission as Spacecraft Commander of the Apollo 13 flight, April 11-17, 1970, and became the first man to journey twice to the moon. Apollo 13 was programmed for ten days. However, the original flight plan was modified en route to the moon due to a failure of the Service Module cryogenic oxygen system. Lovell and fellow crewmen, John L. Swigert and Fred W. Haise, working closely with Houston ground controllers, converted their lunar module “Aquarius” into an effective lifeboat. Their emergency activation and operation of lunar module systems conserved both electrical power and water in sufficient supply to assure their safety and survival while in space and for the return to earth.

Captain Lovell held the record for time in space with a total of 715 hours and 5 minutes until surpassed by the Skylab flights.

On March 1, 1973, Captain Lovell retired from the Navy and from the Space Program to join Bay-Houston Towing Company in Houston, Texas. Bay-Houston Towing company is a diversified company involved in harbor and coastwise towing, mining and marketing of peat products for the lawn and garden industry, and ranching. He was promoted to the position of President and Chief Executive Officer on March 1, 1975.

SPECIAL ASSIGNMENT: President Lyndon B. Johnson appointed Captain Lovell as his consultant for Physical Fitness and Sports in June, 1967. When the Physical Fitness Council was revised under President Nixon in 1970, Captain Lovell was assigned the additional duty of Chairman of the Council. After eleven years of performing his dual role with the Council, he relinquished these positions in 1978. However, he is still a Consultant to the Council and is presently assisting the Council in achieving its objective of making all citizens aware of the importance of being physically fit. The office of the President’s Council on Physical Fitness and Sports is located in Washington, D.C.