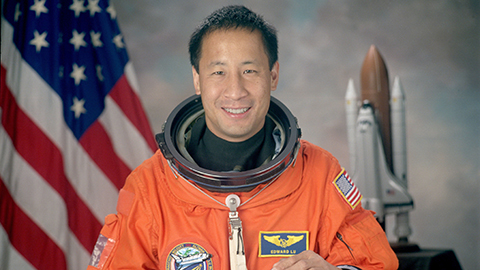 Edward Lu is the founder, Chairman, and CEO of nonprofit B612 Foundation.

Dr. Lu co-founded the B612 Foundation (and its subsidiaries the Asteroid Institute and Asteroid Day) in 2002 in dedication to studying and deflecting asteroids. The Foundation works to provide non-governmental interpretation of asteroid data that is open and accessible to all.

Dr. Lu, who received a PhD in Applied Physics from Stanford University, served as a NASA astronaut for 12 years, during which time he flew the Space Shuttle twice, the Russian Soyuz, and did a six-month tour on the International Space Station, altogether logging over 206 days in space and an EVA (spacewalk) totaling 6 hours and 14 minutes. He was awarded NASA’s highest honor, the Distinguished Service Medal in addition to many other commendations.

After his time at NASA, Dr. Lu served as a scientific advisor to the White House and NASA on space technology and policy issues. Dr. Lu also helped drive energy policy work for Google.org, the philanthropic arm of Google. From 2007 to 2010 Dr. Lu served as Program Manager for Advanced Projects at Google Inc. where he was responsible for a diverse group of projects ranging from Google Street View imaging, book scanning technology, imaging for Google Maps/Earth, and energy projects including Google PowerMeter, an online tool for monitoring home energy usage. Dr. Lu currently serves as an advisor to energy firms and works with several entrepreneurial companies in Silicon Valley including Hover Inc and Liquid Robotics. Dr. Lu has also been an active research scientist working in the fields of solar physics, astrophysics, plasma physics, planetary science. He is also known as the co-inventor of the Gravity Tractor, a practical and controllable means of deflecting asteroids. He has published articles in peer-reviewed journals on a wide range of topics including solar flares, cosmology, solar oscillations, statistical mechanics, plasma physics, and Near-Earth asteroids.