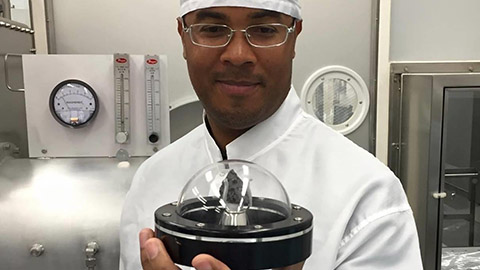 Dr. Christopher Snead is a research scientist and microscale astromaterials specialist working at NASA Johnson Space Center as part of the Jacobs JETS contract.  Dr. Snead is responsible for developing methods and instrumentation for the documentation, handling, and analytical preparation of submillimeter particles from asteroids and comets.

After receiving his bachelor’s degree in Physics at UC Berkeley, Dr. Snead worked at Space Sciences Laboratory in Berkeley, CA where he developed methods and equipment for extracting microparticles from aerogel, in preparation for the return of NASA’s Stardust spacecraft; these techniques were incorporated into the NASA curation facility.  After the return of the Stardust comet samples in January 2006, Dr. Snead worked with NASA curators to extract comet particles from the aerogel collectors and distribute them to the Stardust preliminary examination team.

Christopher received his PhD in geochemistry at the University of California, Los Angeles.  His thesis project involved the measurement of the oxygen isotopes of comet 81P/Wild 2 particles.  He developed a new method of analyzing residues contained within the impact craters on the Stardust foil collectors.  His oxygen isotope measurements established a link between Stardust captured comet particles and stratospherically collected cosmic dust.