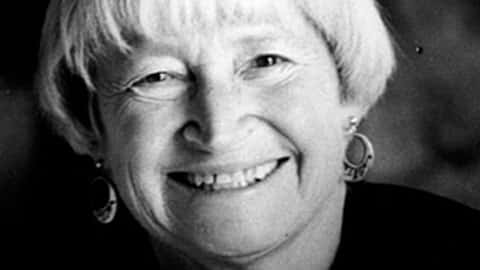 Carolyn Shoemaker is a remarkable woman and an amazing astronomer; she holds the record for the most comet discoveries. She has found more than 800 asteroids and 32 comets. Additional fame comes from her co-discovery, with husband Gene and David Levy, of Comet Shoemaker-Levy 9 in 1993. The comet was ripped apart by gravitational forces on a near collision with Jupiter in 1992. A string of 21 icy fragments continued in orbit until impacting the planet in 1994, as the world observed from telescopes and the Voyager 2 spacecraft views. Carolyn was co-recipient, with her husband Gene, of the Rittenhouse Medal in 1988 and the Scientists of the Year Award in 1995. She received an honorary doctorate of science from Northern Arizona University of Flagstaff in 1990 and the NASA Exceptional Scientific Achievement Medal in 1996. It’s hard to believe these amazing achievements were accomplished by a woman who took up astronomy in 1980, at the age of 51.

Neither of Carolyn Spellmann’s parents were scientists. Her father Leonard initially homesteaded at Mt. Taylor in New Mexico. He quit ranching to take up a clothing store business in Gallup, when he married her mother, Hazel Arthur. Her mother was a schoolteacher in her native New Mexico. Carolyn believes her mother really wanted to homestead-an exciting prospect! Carolyn was born in 1929, in Gallup, New Mexico. After Carolyn’s birth, the family decided to move to Chico, California. Chico was a town that her parents mutually liked and where there was a college for Carolyn and her older brother Richard to attend later. As a child, Carolyn was not interested in stargazing or astronomy, and did not particularly care for science. The only geology course she took bored her. At Chico State College, she got a BS and MS in history and political science. She says she did not know what she wanted to do, but became a junior high school teacher, hoping she would like teaching. However, teaching 7th grade was a disappointment. Carolyn is a warm, caring, and extremely patient woman, but her skills were better suited for a non-teaching environment.

Carolyn Spellman met her future husband Gene Shoemaker at her brother’s wedding in 1950. Richard Spellman had decided to pursue a degree in chemical engineering at the California Institute of Technology. Shoemaker had been her brother’s roommate at CalTech. Gene was then working on a Ph.D. at Princeton University on metamorphic petrology and was best man at the wedding. Her mother had met Gene first, at Richard’s graduation, and returned home to tell Carolyn of the “nice young man she had met.” Richard also seemed to think that Gene and Carolyn would be a good couple and encouraged the romance. On the basis of a pen-pal relationship and a two-week camping tour of the Colorado Plateau, the couple married on August 18, 1951. Carolyn was 22. Carolyn’s patience was a match for Gene’s exuberant “type A” personality. She says, “listening to Gene explaining geology made what she had thought was a boring subject into an exciting and interesting pursuit of knowledge.”

The couple had three children: Christy, Linda, and Pat. Carolyn kept house and reared the kids, while her husband worked and traveled a great deal. They lived in Grand Junction, Menlo Park, and Pasadena. Eventually they settled down and built their dream house in Flagstaff, Arizona, where Gene established the USGS Center for Astrogeology. Carolyn traveled a bit with her husband in these days, but quit long trips after noticing the effect her absence had on the children. Wondering about what role her gender and background had on her later work, Carolyn concedes that she believes “motherhood teaches patience for detail and that women tend to look at the fine details more than men.” Her ability to attend to detail would pay off in her later astronomy career. In addition, motherhood had left her yearning for a higher level of thought.

Initially Carolyn worked as a field assistant for her late husband, Gene Shoemaker. She was working with him in 1997, when the pair was involved in a car crash near Alice Springs, Australia. Gene Shoemaker was killed instantly, while Carolyn sustained severe injuries. She eventually recovered and continued her observation work.

Gene was a cheerleader of other people’s interests. He encouraged her to fly and become a pilot in 1960, because he knew she wanted to, as he did, but could not due to health problems. In the late 1960s, after years as “homemaker and mother” to their three children, Carolyn was faced with the empty-nest syndrome and wanted something fulfilling to do. She asked Gene for suggestions. At CalTech, Gene and Eleanor (Glo) Helin had begun a program to find Earth-approaching asteroids in 1969, in order to determine their statistical encounter with the Earth. Gene knew the program needed additional help and Carolyn was eager to try.

As a young girl, Carolyn considered Astronomy as a field “relegated to only old men in white beards, smoking pipes, and staring at the sky.” In the 1960s, there was still a “prevailing attitude in astronomy that women were used as computers for their attention to fine detail, not for theory.” Bobby Bus, an astronomer at Lowell Observatory and now at the Hawaiian Observatory, was the student at CalTech who trained Carolyn in astronomy. Her patient personality lended itself to the detailed work and her good stereovision allowed her to excel with the new stereo machine that Gene and Helen had designed. Carolyn gradually worked into planetary astronomy as a career and loved it for the opportunity to keep on learning new things each day. The thrill of discovery is deeply satisfying.

When Carolyn began her search for near-Earth asteroids and comets, she admits that it was considered an eccentric pursuit. The importance of this research, including understanding the potential risks of an impact for the future of life on Earth, is not readily understood by the masses. “Comets are the wild card when we consider the potential for impact on Earth. We cannot predict the coming of long-period comets well in advance, and it is necessary to learn more if we wish to defend our planet. We need to know a great deal more about their structure. Are they solid bodies emitting gas and dust or are they unconsolidated flying snowballs easily broken apart, or are they all shades in between? Are some asteroids really extinct comets in which the action has been shut off? Could comets provide a source of water for space travelers? Did comets bring life to Earth or the nutrients for life?”

The work Carolyn Shoemaker carries out involves studying photographic plates and films taken 45 minutes to an hour apart of the night sky. The technique uses a stereoscope, allowing the researcher to view two plates or films simultaneously. When one eye looks at one film and the other looks at the second film, the brain ‘meshes’ or melds the images together. Asteroids and comets appear to ‘float’ above the flat surface of the stars. It is slow, methodical work, which requires training to discriminate between dust or grains of the film and near-Earth objects. The x, y coordinates of the comet are measured, relative to their position to known stars. One must record the times and lengths of film exposure. A typical night’s work lasts 13 hours, as well as the hours scanning the pairs of films afterward. Shoemaker’s discovery rate is about 100 search hours per comet find.

Her passion for her work sustains her through the long nights of tedium and painstaking work, combing through exposed films. “My real love for the night skies developed while observing at Palomar Observatory in California, and that love has never diminished.” Carolyn Shoemaker has spoken about her feelings when she finds the latest comet, “I want to dance.” It is this exuberance of spirit, which she is able to impart to the public in lectures and public presentations around the world.

It is hard to separate the careers and lives of Carolyn and Gene Shoemaker. The two mutually supported each other throughout their symbiotic marriage. Without Gene, Carolyn would never have become a famous astronomer. Without Carolyn’s help, Gene would never have progressed very far with his asteroid statistics program, found comet Shoemaker-Levy 9, and probably would never have mapped impact craters in Australia. Without each other, they would not have been successful companions and working partners, had their children, or home life.

In the end, successful careers – such as Carolyn’s – depend on the individual and on their luck in being influenced by other people. Carolyn and Gene certainly encouraged and influenced each other. In the Astrogeology Team at the USGS, we were all deeply influenced by Gene. We continue to be influenced by Carolyn’s dedication, stability, kindness, and patience, and we look forward to her additional discoveries.