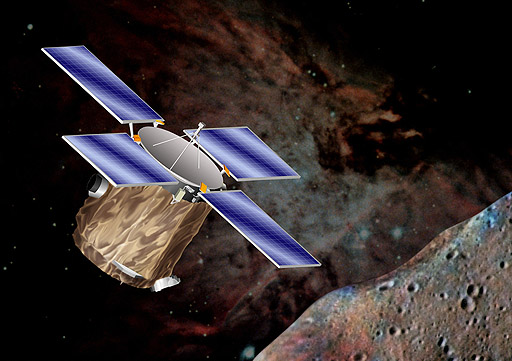 There was a lot more riding on the Delta II rocket that launched from Cape Canaveral on 17 February 1996 than the NEAR-Shoemaker space probe. NASA’s pride was on the line. A string of expensive failures had hurt the agency and now they were taking a fresh approach.

Instead of concentrating on large missions that cost huge amounts of money, NASA began the Discovery programme. Each spacecraft would be smaller, and therefore cheaper to produce. Each mission would be tightly focused on specific scientific questions.

Being cheaper and quicker, the idea was that more missions could be produced, answering more questions across the solar system. Importantly, if the worst were to happen and a mission failed, although sad it would not be devastating.

The mission chosen to blaze this ‘faster, cheaper, better’ trail was the Near Earth Asteroid Rendezvous mission, NEAR for short. Later renamed NEAR-Shoemaker to commemorate American geologist and planetary scientist Eugene Shoemaker, the mission was doubly historic. Not only was it designed to restore success to the agency, it was to be the world’s first mission dedicated to studying asteroids. 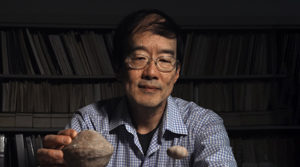 The spacecraft was to be supplied to NASA by the Applied Physics Laboratory, Johns Hopkins University, Maryland. They had a long history of developing smaller satellites for NASA, stretching back to the very beginning of the space race. The man chosen to become project scientist and head the mission’s science team was APL’s Dr Andrew Cheng.

“I was a planetary researcher but not in asteroids,” says Cheng. But in the late 80s/early 90s when work began on NEAR, that did not put him at a disadvantage. “Asteroid research was very much in its infancy at that point. We had the most basic questions,” he says.

One of those questions related to the link between asteroids and meteorites. Although it was thought that the most common type of meteorites, known as chondrites, should come from a common type of asteroid, known as S-types, there was no definitive proof.

Back then just over 10,000 asteroids were known, most of them in the main asteroid belt between Mars and Jupiter. Now there are well over a million. NEAR-Shoemaker’s primary mission was to study the near-Earth asteroid Eros for about a year and since Eros is one of the S-type (silicaceous) asteroids, it was the perfect place to make the investigation.

Thanks to the work of NEAR-Shoemaker and subsequent analysis, we now understand the link between meteorites and asteroids, and that many asteroids are indeed rubble piles. NEAR-Shoemaker flew past asteroid Mathilde en-route to Eros, and measured a very low density, showing that it was a loose collection of ‘rubble’. Eros, on the other hand, was so dense that it has to be a single chunk of rocks.

In the early 1990s, when NEAR-Shoemaker was in the planning stages, another NASA mission flew through the asteroid belt. The mission was called Galileo and although its primary target was the giant planet of Jupiter, its trajectory was designed to take it past two asteroids: Gaspra and Ida. The second of these asteroids was even discovered to have a moon, which was subsequently named Dactyl.

“[Seeing those images] was very exciting and very strange. No one believed that an asteroid could ever have a moon. Now, we know that moons are very common, in fact, one out of every six asteroids in the near-Earth population has a moon,” says Andy.

Why these tiny moons – Dactyl was just 1.5 metres across – are so prevalent is still unknown, though Andy suspects it must relate in some way to how the asteroids were formed.

After more than 20 months in space, NEAR Shoemaker was on approach to Eros. But things went wrong on 20 December 1997 when the spacecraft failed to execute the first of four engine burns to bring it into orbit around the asteroid. Instead, it flew by Eros and mission planners on Earth began to rethink their strategy.

Eventually, and with a sense of timing that must have had NASA’s press officers jumping for joy, the spacecraft settled into the gravitational embrace of Eros on 14 February 2000. And the science really began to flow.

A very early surprise was the discovery of ‘ponds’ on Eros. Of course, there were not ponds of water, but ponds of crushed rocks and gravel. This material is a rock celestial object’s version of soil. It’s called regolith and the principle place it had been recognised at the time was the Moon.

The lunar regolith has been created over aeons by the impact of asteroids and other smaller celestial bodies on its surface. Each impact blasts surface rocks to smithereens and throws them across the surface to form the regolith layer. With a sense of dramatic understatement, planetary scientists call the process ‘gardening’.

Until the images of Gaspra and Ida, planetary scientists had been unsure that the low gravity of an asteroid could even capture regolith, yet here on Eros they were seeing depressions full of regolith. This was a feature no one had predicted.

“They literally look like liquid, but they’re not, they’re dry powder. And most of us think that these ponds actually formed because of seismic shaking,” says Andy. In this scenario, the seismic activity makes loose material on the asteroid’s surface slide down into the bottom of depressions, creating the pond.

And that in itself was another extraordinary discovery: seismic activity on an asteroid. This is thought to have been caused by the impact of smaller asteroids and meteoroids, and is driving the research effort to put a small, seismic station on a nearby asteroid. 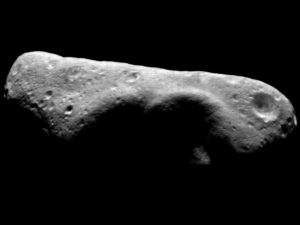 After a year of pioneering science and discovery, the NEAR-Shoemaker team had one final – and again historic – thing they wanted to try. To end their mission in a pioneering way, they wanted to land on Eros. This was something that the mission’s flight director, Robert Farquhar, had been quietly planning with Cheng since the development phase of the mission. But they were all but forbidden from talking about it.

The reason was that NEAR-Shoemaker carried no equipment to assist in a landing. NASA agreed to let the team talk about making a controlled descent to the surface but the suggestion of a landing, which implied a subsequent phase of mission operations on the surface was banned. However, Farquhar and Cheng were determined to try.

The gravity of Eros, or any other asteroid, is so low that they realised it would be more like a docking than a landing, and although they expected to lose contact at the point of touchdown because the spacecraft might hit a rock and break or tumble, just the act of proving you could softly navigate to an asteroid’s would be worth it.

On 12 February 2001, the spacecraft neared the surface. It was moving at roughly walking speed, around 2 metres per second. It touched Eros, and the team held their breath: it was still transmitting. NEAR Shoemaker had survived touchdown and was still working. There was no other way to describe it, the team had landed on an asteroid for the first time in history.

“That was astonishing,” says Andy, “Demonstrating that the landing was possible and that it’s not even hard to do – we were able to do with an orbiter that had no special equipment or provisions. That led the way for all the subsequent missions that have landed on asteroids.”

This is now a growing roster of such missions: NASA’s OSIRIS-REx, JAXA’s two Hayabusa probes, and ESA’s Rosetta mission to comet 67P/Churyumov-Gerasimenko for example. All trace their lineage back to NEAR-Shoemaker.

It proved too that NASA’s Discovery mission could provide valuable science with cost effective missions. Indeed, the Discovery programme continues today and often favours asteroid missions. On 4 January 2017, the Lucy and Psyche missions were selected to be the 13th and 14th Discovery missions, respectively. Lucy will study asteroids known as Trojans, which are locked into Jupiter’s orbit. Psyche will explore the mysterious metal asteroid it is named after, which could once have been the core of a forming planet. Although Andy is not involved in those missions, it doesn’t mean he lost his love for pushing the boundaries of asteroid research.

Having pioneered dedicated asteroid missions with NEAR-Shoemaker, he is now the co-lead for NASA’s Double Asteroid Redirection Test (DART). This ambitious mission will launch in July this year and will be the first ever attempt to deflect an asteroid’s orbit. It is a test in case such a manoeuvre becomes necessary in the future, and like NEAR-Shoemaker before seems destined to open another historic chapter of asteroid research.

The magnitude of this work is not lost on Cheng and yet he remains grounded when asked how it feels to be so on the cutting edge. “It’s humbling. It’s very exciting. But this is what I do – what I have to do. I’m just not able to do anything else,” he says.