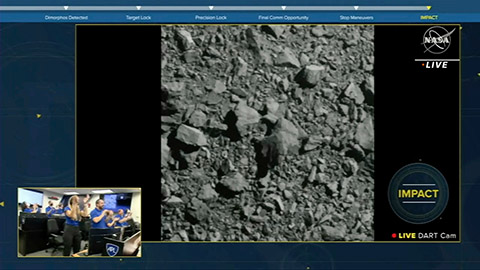 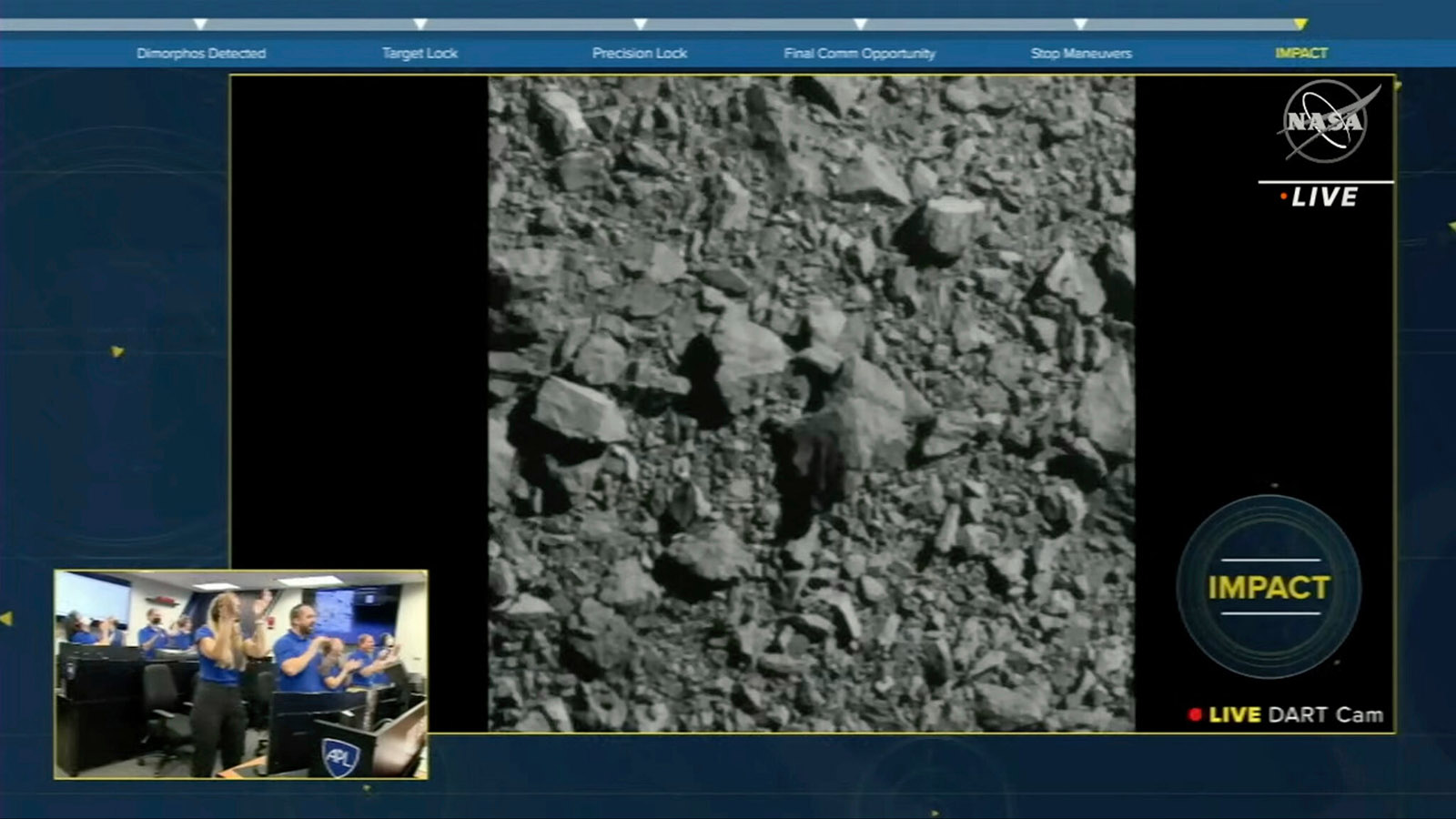 Mission Operations Center at the Johns Hopkins Applied Physics Laboratory in Laurel, Md. watch and cheer as the DART spacecraft is in its final moments before impact.

NASA’s DART spacecraft has successfully become the first artefact to purposely impact a celestial body in an effort to change its orbit. The collision occurred at 23:15 GMT/UTC as predicted by the mission team. The real effect of this intervention will begin to be known in the coming days or weeks.

The last images of the asteroid Dimorphos surface taken by the DART spacecraft before its impact. (NASA/JHUAPL)

The pioneering planetary defence mission was launched on November 24, 2021 atop a SpaceX Falcon 9 rocket from the Space Launch Complex 4 at the Vandenberg Space Force Base in California. In the past few days, scientists have been able to get first images of asteroid Didymos and its moon and target, Dimorphos via the Draco camera. In the final minutes before the impact, spectators around the world tuned into NASATV and watched as the rocky surface grew closer and closer until the feed was lost.

Dimorphos is a small moon about 160 meters in diameter that orbits a larger asteroid, Didymos, at 780 meters. Although classified as a “potentially dangerous asteroid” because of its occasional proximity, Didymos poses no risk to our planet, allowing NASA to choose it as a test target.

The deflection test used is known as “kinetic impact”. This strategy consists of colliding an artifact against an object and, thereby, subtly altering its orbital velocity. The impact occurred as predicted, at 21,600 km/h.

It will take days or weeks to know how much the asteroid’s orbit has been altered by the probe. This measurement will be estimated via space and ground-based telescopes. The period of revolution of Dimorphos around Didymos of 11 hours and 55 minutes is expected to undergo a small change.

Joining DART on its journey was LICIACube, a small satellite developed by the Italian Space Agency programmed to take images of the moment of impact. So far, the LICIACube images show a bright material releasing from the surface of Dimorphos.

Plume seen in this image animation taken by the Asteroid Terrestrial-impact Last Alert System – ATLAS ground-based telescope during the impact of the DART spacecraft on the asteroid.

Earth based observatories, such as ATLAS, Virtual Telescope Project and Klein Karoo Observatory also captured the changes in the asteroid’s appearance and brightness, in addition to the presence of a plume caused by the probe’s impact.

Details of the transformation of the asteroid’s surface can only be confirmed in the future, with the launch of the European Hera mission, scheduled for 2024 with the aim of revisiting the asteroid and seeing the size of the damage left by DART.

Learn more about this historic event: