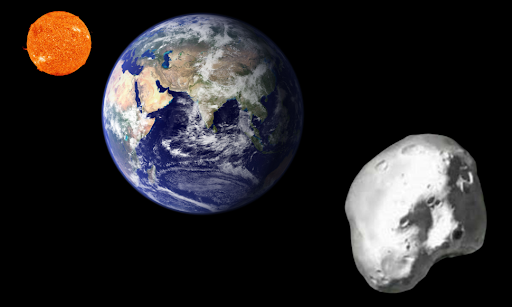 Learning Objective:
Learn how to determine the best time to observe an asteroid and what conditions should come together to make it possible.

Overview:
Asteroids just like planets orbit around the Sun. Many asteroids travel in stable orbits and therefore do not pose any threat to our planet. However, at a certain orbiting point they might pass closer to the Earth, which gives us a chance to observe them with the help of relatively simple devices. In this lesson, we will introduce you to the different factors that asteroid hunters should take into account when attempting to spot an asteroid. You will find out how asteroid opposition impacts their brightness. We will also share with you some useful online resources that will help you track asteroids with more precision.

Specifics:
Media outlets all around the world frequently report near-Earth asteroid flybys. In fact, some of these asteroids pass at the nearest possible distance to our planet and luckily don’t pose any risks.

Want to see one of these near-Earth flybys? So do we! Unfortunately, it is nearly impossible for the average citizen to spot one of these space rocks. With their small size, there is very little sunlight illuminating them and it takes more high-powered telescopes and equipment to see them. 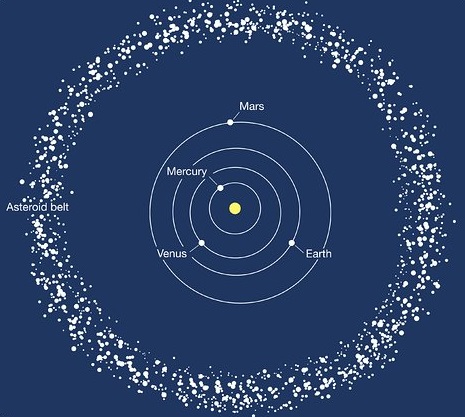 So, to be able to spot an asteroid in the night sky, it should be bright enough and at the right distance from the Earth. Let’s dig into the specifics.

Asteroid brightness: In Astronomy, the apparent brightness of asteroids is described with the help of the same magnitude scale used for stars, planets, and other celestial bodies. This scale is inverse, which means that the bigger the number is, the lower the brightness. Therefore, negative magnitude numbers indicate very bright stars.

For example, the sun’s magnitude is estimated at -26, the Full Moon can reach -13, and Sirius, the brightest star in the night sky, has a magnitude between -1 and -2. In the clear night sky, our eyes can see objects up to magnitude +6. Vesta, the brightest asteroid seen from Earth, reaches magnitudes between +5 and +6 when it is at its best time for observations.

Even though the Main Belt objects have higher chances to be seen than the smaller asteroids crossing the Earth’s orbit, they are still not bright enough to be observed in the same way as stars and planets.
Another factor that comes into play here is how far the asteroid is from the Earth and the Sun.

Asteroid opposition: Like planets, Main Belt asteroids revolve around the Sun, but are further away from it than the Earth. At some point, our planet will find itself between the Sun and one of these asteroids in a way that we can connect them with a straight line,

On this imaginary line, the Sun will be on the opposite side of the asteroid. For this reason, astronomers call this phenomenon “opposition”. Oppositions are a great time for stargazers because it’s when an asteroid reaches its shortest distance from the Earth. In effect, the asteroid reflects more light and therefore becomes brighter, which makes it easier to spot and observe it.

On the day of opposition, asteroids rise around sunset and set around sunrise, which gives the observers the whole night to gaze upon them. It’s a great opportunity, especially for asteroid hunters located in areas where sky observation is limited due to light pollution or other obstacles.

The represented orbits are circular and in the same plane for simplification purposes only. (John Jardine Goss/Earth Sky)

Asteroids just like planets have an elliptical orbit. With each complete revolution around the Sun, asteroids reach their closest (perihelion) and farthest point (aphelion) from the star. In some cases, the time when an asteroid is in opposition coincides with the time when it is closest to the sun. This is called perihelic opposition.

Position of asteroid 12 Victoria in July 2021. The difference between its opposition and its perihelion was only 5 days. Its magnitude as seen from Earth usually oscillates between 9th and 10th magnitude at common oppositions, but in this perihelic opposition the asteroid reached the 8th magnitude, getting brighter. (Astro.vanbuitenen.nl)

Thanks to the sunlight, asteroids in perihelic opposition gain extra brightness. Perihelic opposition is rare, but it provides much better asteroid observation conditions.
Now that you know what factors make it possible to observe asteroids, let’s find out which ones are the best to track and what online tools can help you with this.

Best Asteroids to Observe: Undoubtedly, Vesta is the best asteroid to track, especially for beginners. This Main Belt object even gives the observer a small chance to see it with the naked eye on clear nights! Ceres, Pallas, Juno, and Iris asteroids can be easily spotted with binoculars when they reach opposition.

Image of asteroid Vesta (center) captured by a telescope during its opposition in November 2019. Its appearance is similar to a star (Gianluca Masi / The Virtual Telescope Project)

Even at a time of closer proximity to Earth, asteroids can be easily confused with stars. To avoid this, it is necessary to observe them a few days before and after the opposition. This will help track their movement and distinguish them from the stars that will appear still.

Animation with sequential images of the asteroid Vesta taken from February 18 to 21, 2021 with a binocular and cell phone. This sequence helped to notice the movement of the asteroid in relation to the background stars. (Piqui Diaz - Argentina / Sky & Telescope)

Online sky maps provide information on asteroids’ location in real-time. The Sky Live informs you about the asteroids that can be observed according to your location and offers a list of planetariums and simulators that show the position of asteroids and their orbit in space.

Astro.vanbuitenen.nl lists a table of asteroids that are currently bright enough for amateur telescopes. You can also find their upcoming opposition dates, magnitudes, and other useful information. This website contains an all-sky chart that will allow you to simultaneously see the current position of these asteroids in constellations.

The Heavens Above also offers a list of the best asteroids to observe, showing their location among the constellations in real-time. The online version of the well-known Stellarium simulator, an online planetarium running in your web browser, allows you to locate an asteroid more accurately.

Specialised pages like Sky & Telescope, Universe Magazine, Earth Sky, and Space.com usually report when some asteroids are in opposition.