Today’s blog post is brought to you by Daniel Bamberger from Marburg, Germany.

Hi there everyone! I am Daniel Bamberger, and with my colleague Guy Wells, from London, we run the Northolt Branch Observatory. From there we observe and track Near Earth objects. Our goal is to raise awareness of the significance of asteroids.

I think asteroids are fascinating! They can tell us about how our Solar System formed, and maybe even how life itself came into being. However, what is of much larger practical significance is the potential threat they pose. There are potentially dangerous asteroids, and every so often one of them collides with Earth.

Nobody knows where exactly most of these potentially dangerous asteroids are. But we know that there must be thousands of them, and most are still left to be discovered. Each of them is only observable for brief periods of time, and there is a lot of sky to monitor.

Of course, efforts are under way: The number of known asteroids has increased dramatically, mostly due to a few large telescopes that continuously survey the sky. That is a good start.

However, it is not enough!

The existing surveys can only cover a fraction of the whole sky, and it is important to remind politicians and funding agencies about the importance to work on the next generation of telescopes. Another problem with these big surveys is that they can not provide the directed follow-up observations necessary to keep track of newly discovered asteroids. That is where scientists rely on a network of dedicated amateur astronomers, who target the interesting objects and send their results to the Minor Planet Center. Without that extra data, most new objects would be lost before we could assess their potential impact risk. We are glad to be part of that network.

I tell you a secret! You can connect to the ground work of tracking Near Earth asteroids, even if you don’t know how to use a telescope. Just use the new Asteroid Day “Xmas Rocks!” profile frame! That profile frame is literally rocky, because the snowflakes in it were created from one of our images of a Near Earth asteroid – a space rock! 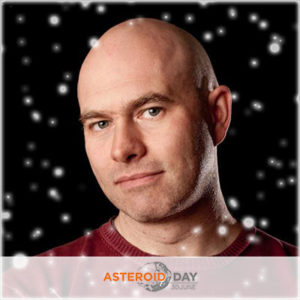 In the following, I will explain some of the details behind that image.

Asteroids appear to be moving with respect to the background of stars because they are orbiting the Sun. The closer an asteroid is, the faster it seems to move, and Near Earth asteroids can move quite fast. As a result, long exposure images of an asteroid will either show it as a trail (if it is a bright one) or, more likely, the asteroid will not be visible at all.

This poses a problem for observers, because most asteroids are very faint and require a certain amount of exposure time to be seen. To overcome that challenge, we use a technique called “Track and Stack”: We take many images, each with an exposure time short enough such that the trailing is not noticeable. We then use specially designed software like Astrometrica to combine these images in a way that corrects for the motion of our target. This results in stars appearing as trails, while the asteroid looks round and sharp: 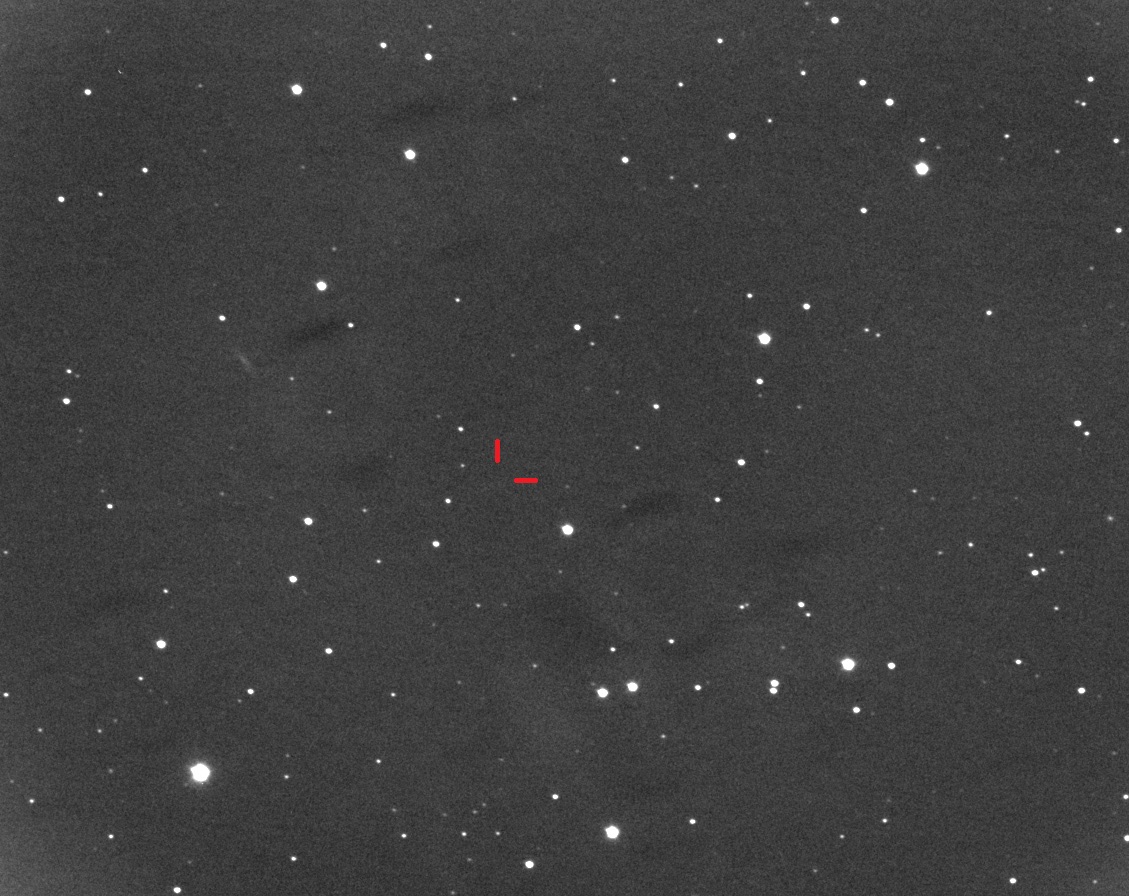 But the stars are not trailed in single exposures – so it is possible to process the data such that the stars appear focused. Here is the exactly same data set as in Fig. 1, but stacked on the stars: 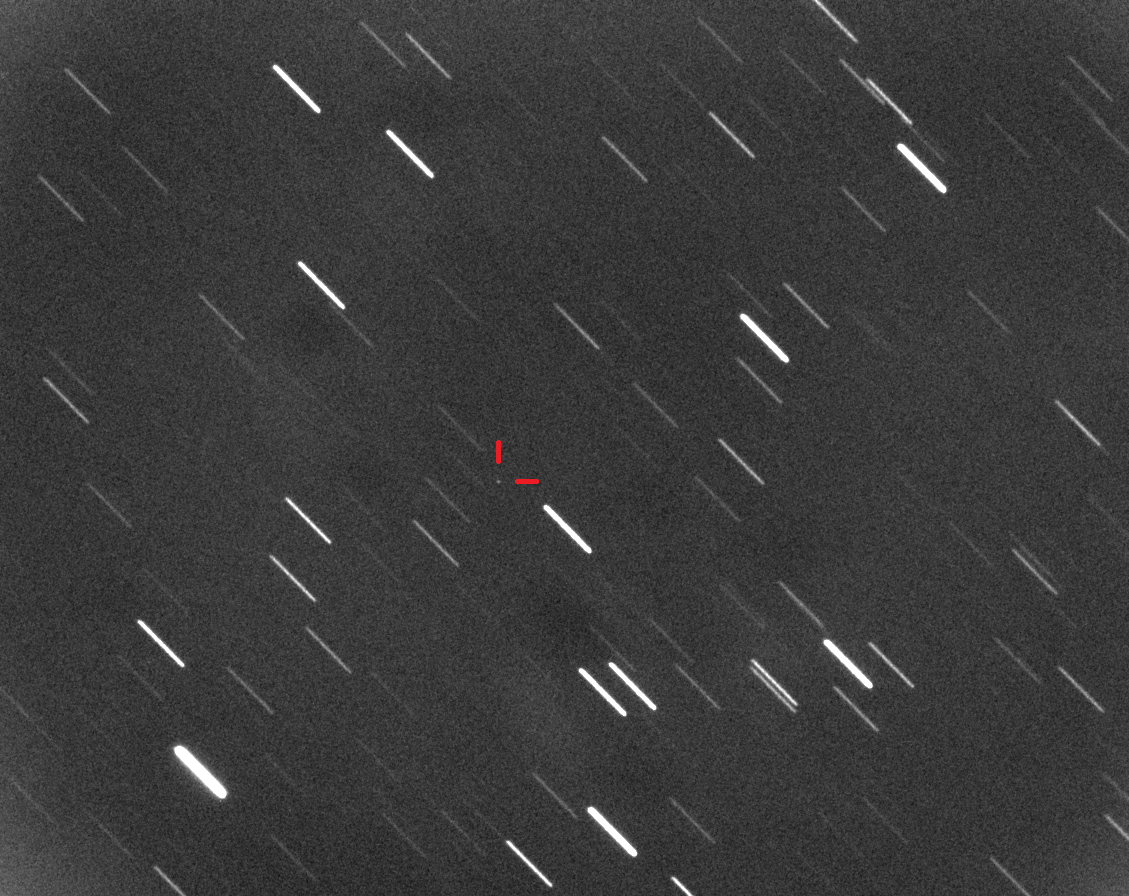 Notice that the asteroid, which could clearly be seen in the first image, is not visible in Fig. 2; similar for many of the fainter stars in Fig. 2, which can not be seen in the stack on the asteroid. These are two sides of the same coin: Fainter objects get “washed out” by trailing.

The asteroid that we observed there is (36236) 1999 VV, and it is pretty big (at least for a Near Earth asteroid): Between 2 and 4.5 kilometres (1.2 to 2.8 miles) in diameter. It does not pose a threat to Earth in its present orbit, because it does not cross our path. But it is still important to keep track of it, because orbits can change.

Like many asteroids, it does not revolve around the Sun in the same plane as the major planets (the ecliptic), but is highly inclined to it; its orbit is also pretty elongated. Here is a visualisation, with the positions of the inner planets and the asteroid, as they were placed around the time when we took our images: 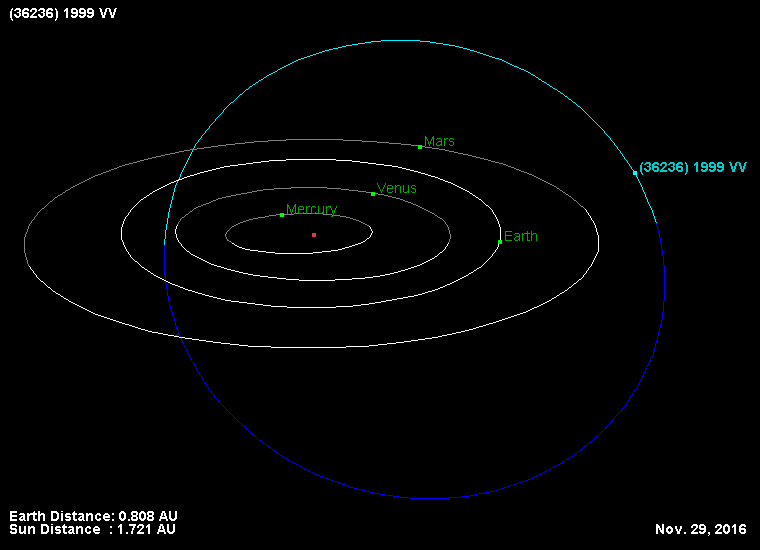 If you think that asteroids are important, and you want to help, there are many things you can do: Tell your people about it, and why you think it matters. Write to your representatives and ask them to pay attention to the asteroid threat. Keep following Asteroid Day to always get the latest news about asteroids. You can also follow Northolt Branch Observatory, on Facebook and Twitter.

If you have ever used a telescope with a camera, chances are that you have not tried to image an asteroid yet. They do not get much attention by amateur astrophotographers, probably because they look less impressive than galaxies or nebulae. But I really encourage you to give it a go! You will be surprised how little you need to successfully image asteroids (actually, it may be easier than deep sky astrophotography).

And if you find that you enjoy it, you should think about joining that global network of amateur asteroid observers who play such an important role in asteroid science. You do not need a big telescope; all you need is the wish to participate in actual science, by doing it yourself.

You certainly can help to make scientific progress. Maybe you can even help to save lifes.