Asteroid Day expert Dr. Boslough assesses the effects of meteors in the sky, and how they might be more relevant than we thought to humanity.

As I prepare slides and we pack bags for Luxembourg and Asteroid Day, something strange is appearing in the skies around the world. Noctilucent clouds—shimmering wisps in twilight sky—are normally only seen on the poleward side of 50° latitude. This year they have been seen to the south of 35° N. Why? 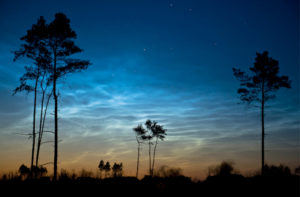 Noctilucent clouds (NLCs) are easily visible to the naked eye, but were never reported before the industrial revolution had kicked into high gear. The first confirmed observations were in 1885. It’s tempting to link them to fossil-fuel driven climate change, but how could that generate clouds 50 miles up?

Human-caused global warming causes stratospheric and mesospheric cooling, which might suggest more condensation of ice particles that make up NLCs. But colder air means crystals are also smaller, which (counterintuitively) reduces their visibility. 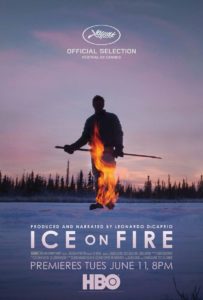 Even in a cold mesosphere, condensation nuclei are needed to turn water vapor into the ice crystals that cause NLCs to scatter sunlight. Windblown dust from Earth’s deserts or salt from sea spray can’t get that high. The nuclei come from above as dust from meteors.

They don’t have to be small meteors. We know that when comet Shoemaker-Levy 9 struck Jupiter 25 years ago this summer, the ballistic plume formed a visible NLC out of condensed comet vapor when it collapsed (imaged by the Hubble Space Telescope (HST) team led by my colleague and friend, Heidi Hammel).

Those HST images led to an “aha!” moment. After the 1908 Tunguska airbursts, a bizarre cloud drifted over western Europe that was so bright it was said that you could read a newspaper under it at midnight. The cloud of meteorite dust was high enough to be sunlit. 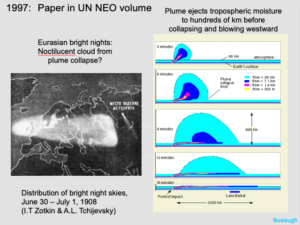 Similar NLC-like clouds were documented after airbursts above Tagish Lake (2000), Chelyabinsk (2013), & Bering Sea (2018). Here’s a cool movie created by Simon Proud that shows something in the last few frames that looks like an NLC from the Bering Sea bolide. 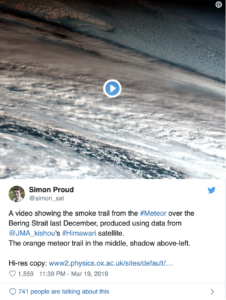 June 30 was chosen as the date for Asteroid Day because it’s the anniversary of the Tunguska explosion. That date is also significant because it’s near the peak of the Beta Taurids, a daytime meteor shower associated with debris from Comet Encke. My simulations suggest that the Tunguska object was on a trajectory that is completely consistent with a Beta Taurid. 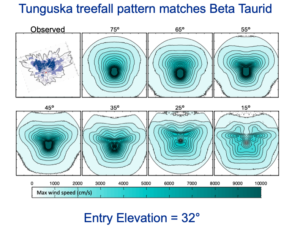 This association has a long history. In 1996, I attended a presentation at the Tunguska96 conference in Bologna by David Asher, who argued for a Taurid resonant swarm that was in a 7:2 resonance with Jupiter. He suggested that it could contain many objects, one of which was the Tunguska object. 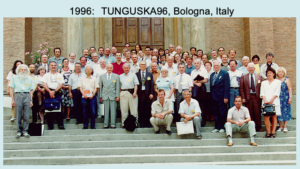 It’s a difficult hypothesis to test, because Tunguska-sized objects (my models suggest ~40 meters) must be very close for even the most powerful telescopes. The resonant swarm rarely comes close enough. But my colleague and member of the Asteroid Day Expert Panel, Peter Brown, pointed out to me last summer that 2019 is an exception.

The center of the swarm (if it exists) is now crossing Earth’s orbit at a spot only 5° away. 1975 was the last time it had a closer crossing. Seismometers that had just been placed on the moon by Apollo astronauts recorded a significantly higher rate of impacts that summer. 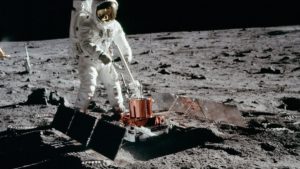 Peter suggested an observational campaign to look “down the pipe” toward the anti-radiant of the swarm, at a “sweet spot” in space where near-misses would appear to converge. We presented this idea at the 2018 American Geophysical Union Fall Meeting in December, and it was written up by Joel Achenbach of the Washington Post in a story entitled, “Incoming! A June meteor swarm could be loaded with surprises.”

We soon realized that another strategy might be to go look for larger objects near the center of the swarm as it crosses into the night sky behind the Earth in our orbit. David Clark did the necessary calculations and generated some images of the swarm’s visibility to guide observations. We included them in a poster we presented at our biannual Planetary Defense Conference in late April/early May. The details of his calculations have now been published in the technical paper led by Dave, “The 2019 Taurid resonant swarm: prospects for ground detection of small NEOs,” just in time for the observational campaign to begin! 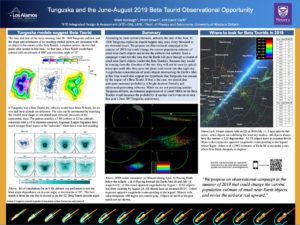 Shortly after the conference, I told Phil Plait about it. I didn’t want to wait until the last minute to get some publicity for the opportunity to be known to all astronomers involved in NEO survey efforts. Phil wrote up a Bad Astronomy story, “Could larger space rocks be hiding in the beta taurid stream? We may find out this summer.” If there is a high concentration large enough objects, we should start getting news about the discoveries very soon as they pass into the night sky and into view of giant survey telescopes.

Phil included links to Dave’s movies & illustrated it with Don Davis’s depiction of Tunguska explosion. By coincidence, I’d just heard from Don a couple of days earlier to discuss collaboration on a new set of paintings of the formation of Meteor Crater (his previous, which adorned the Meteor Crater museum for many years, were from 1982).

Don is one of my favorite space artists, whose illustration of the Tunguska event is both technically accurate and aesthetically beautiful. It was based, in part, on my simulations of the event. I use it in talks all the time. 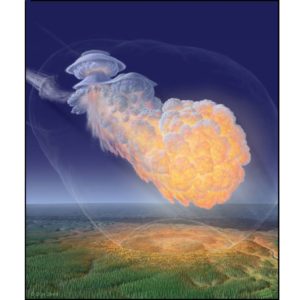 We’d been playing email and phone tag for weeks, but we finally got through and had long, wide-ranging, and fun conversation. Among the things we discussed was his plan to try to photograph the glow (like zodiacal light) from the Taurid swarm with a wide-angle lens. Something that had never occurred to me.

The first item in my inbox the next day was from him, with a photo he’d just taken of noctilucent clouds from Joshua Tree. “Something highly unusual,’ he said. “Perhaps meteor dust is being sprinkled in some quantity on us.”

He sent me another message the following day, letting me know that his sighting had set a record for the furthest south an NLC had ever been observed in the northern hemisphere, according to spaceweather.com.

If the Taurid Swarm is a real thing, and if it’s got a lot of dust associated with it, then it may have already gotten here by the dates of these observations. Here are the frames from Dave Clark’s animations of the putative swarm on this year’s Asteroid Day, June 30. If there are large objects they will be visible in the night sky and bright enough to discover. But what about dust? 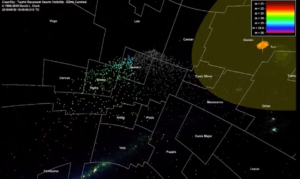 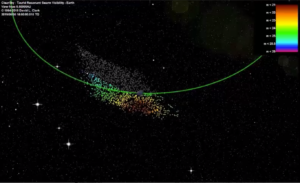 Modeled view of swarm from above Earth’s orbital plane on June 30, 2019 (David L.Clark)

NLCs require two things. 1) Water vapor in the mesosphere. 2) Condensation nuclei. Scientists featured on the documentary Ice on Fire showed methane leaking from everywhere at unprecedented rates, so water vapor level is now undoubtedly higher than it used to be. According to David Asher’s calculations the Taurid Swarm is historically close this month, so there may be an unusual abundance of condensation nuclei. These effects might also be amplified by the fact that we are in a solar minimum, which means there is currently a lower flux of extreme ultraviolet radiation that can destroy water molecules in the upper atmosphere.

Whatever the cause, I encourage everyone to take advantage of the unprecedented display this summer.  Go out after sunset or before dawn, look for them, and share your photographs. They are beautiful, but they also might be serving as our planet’s “idiot light” in the sky. We should not ignore nature’s warnings, even if we’re still not sure exactly what they mean. 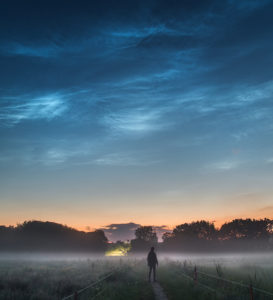 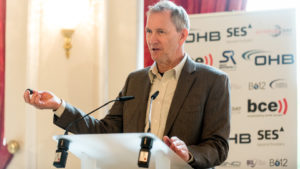 Learn more about his work here: