Asteroid Apophis and the “keyhole” 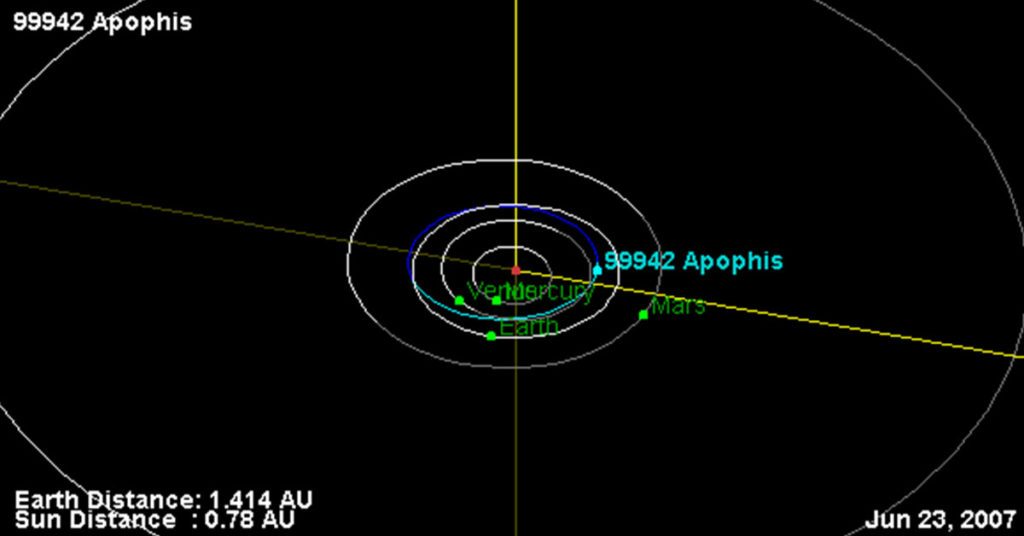 Asteroid Apophis and the “keyhole”

Could you please respond to the following question with regards to the below conversation;

Tony HW I recall hearing Neil deGrasse Tyson referring to a 6600-milezone/range “keyhole” area of space – that if Apophis was to go through – the trajectory would be “redirected” for an impact with Earth 13 years later – could you please offer some insight with regards to this point? Thanks!

The numbers in the question below are not correct.  What Neil DeGrasse Tyson most likely said was that at the close pass of Apophis by the Earth in 2029 there is a 600 meter wide keyhole which, if Apophis passed through it would gravitationally bring the asteroid back to an impact in April 2036.  (Not 13 years later, but 7)

Additional tracking several years ago however reduced the position uncertainty during the 2029 pass such that the probability of Apophis passing through that keyhole shrunk from 1:250,000 (already very low) to zero.  In other words ,there is no possibility that Apophis will pass through the 2036 keyhole in 2029.  In fact ,Apophis will come nowhere near the Earth in 2036.

On the other hand ,Apophis will make a relatively close pass by Earth in 2051 and there is a 1:256,000 chance (based on current tracking) that it will pass through a 180 kilometer wide keyhole causing an Earth impact in 2068.  Again, this is a very low probability and it is highly likely (i.e. 255,999 out of 256,000) that with further tracking between now and 2051 that minimal probability will also go to zero.  (current data from JPL)

This is a process which goes on continuously with all NEOs which have a non-zero probability of Earth impact.  There are today 553 such NEOs out of the total of over 12,000 discovered.  It is highly likely that all of these 553 objects will not hit the Earth, but so long as the probability is non-zero we keep tracking them whenever they come into view to get more and more precise orbits for them.  Some day the probability will not drop to zero for one (or more) and those are the ones we will then mount a deflection campaign for and prevent the impact.

Much of this information is readily available on the JPL NEO website, http://neo.jpl.nasa.gov/risks (and other tabs on that site).

Is there any new information on the Asteroid ”Apophis”? Could the trajectory of this 11 million ton chunk of iron & rock be miscalculated?

An impact from Apophis has been effectively ruled out in 2029, but what about 2036 or later, is there still a threat, I’m worried?