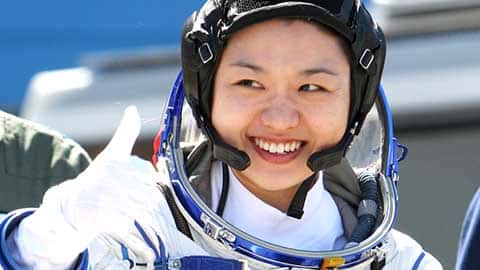 EXPERIENCE :
She worked as an internship at the Korea Institute of Machinery & Materials from July 2000 till August 2000. Since March 2001, she has participated on designing, fabricating and testing Bio-MEMS devices at the Digital Nanolocomotion Center, KAIST. In December 2006, she was selected as final two Korean astronaut candidates and has started working at the Korean Astronaut Project Division, KARI as a researcher. From March 2007 till April 2008 she has been conducted the general space training for the Space Flight Participant in the Y. Gagarin Cosmonaut Training Center. On 8 April 2008, she was launched into space on board Soyuz TMA-12, with two Russian cosmonauts, Sergei Volkov and Oleg Kononenko, and returned to Earth along with ISS crew members Peggy Whitson and Yuri Malenchenko aboard Soyuz TMA-11, on April 19, 2008. After her flight, she works as a senior researcher at KARI as well as acting as Korea’s space ambassador. Recently, Dr. Yi received her MBA at the Haas School of Business, University of California, Berkeley with an emphasis on technology and global leadership in May 2014.