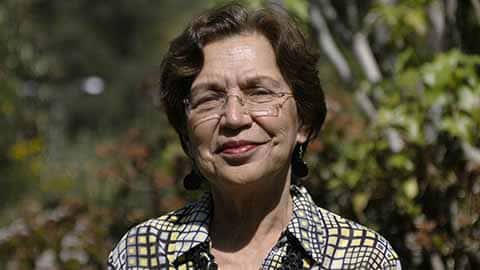 Silvia Torres-Peimbert (born 1940) is a Mexican astronomer. She won the L’Oréal-UNESCO Awards for Women in Science in 2011 on behalf of Latin America for her work determining the chemical composition of nebulae.

Torres-Peimbert was born in Mexico City in 1940. She studied Physics at the Universidad Nacional Autónoma de México before going on to the University of California in Berkeley. She returned to Mexico to conduct research at her alma mater. She studies the creation of stars and the mass thrown out by mid-size stars. She has studied the distribution of helium left over from the first creation. In 1973 she became a professor at UNAM and from 1998 until 2002 she was a director of that institution. During this time she has worked closely with Manuel Peimbert. Torres-Peimbert and Peimbert had both been mentored by Guillermo Haro. (Haro was in 1959 the first person elected to the Royal Astronomical Society from a developing country).

She won the L’Oréal-UNESCO Awards for Women in Science in 2011 on behalf of Latin America. The award is given annually to leading women scientists with an award being given to five continents. She won the award for investigating the “chemical composition of nebulae” which the organisers considered essential to our understanding of the beginning of the cosmos. She also won the Hans A. Bethe Prize in 2012 for her work in determining the quantities of helium and other different elements during the development of the universe. Knowing about these elements allows cosmologists to understand the evolution of stars and galaxies.